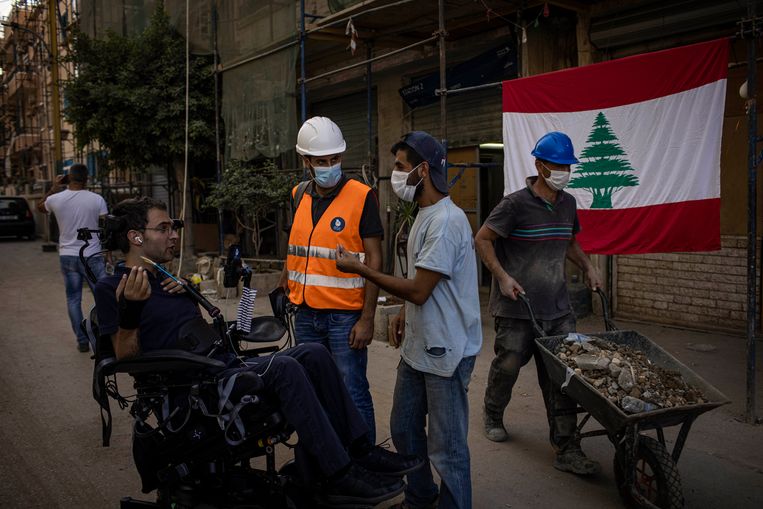 The man who is resurrecting entire streets in Beirut is in an electric wheelchair. Marc Torbey Helou (33) is unable to walk and barely uses his arms. His phone, which rings constantly, because Marc is busy, he operates with a stick that he clamps between his teeth.

Several times a week, Marc checks the progress of the reconstruction of the streets under his leadership. When he comes, a crowd is formed. Local residents run from their damaged houses after Marc, who drives cautiously through the half-ruined streets. They want to have their picture taken with Marc. They thank him.

This story takes place in the working-class neighborhood of Karantina (‘Quarantine’), right behind the port of Beirut. The houses in Karantina have been badly damaged as a result of the devastating explosion that hit

August 4 in the port took place – 203 dead, thousands injured, hundreds of thousands of residents who could no longer sleep at home. These inhabitants are now slowly finding their way back to the dusty construction site that has become the center of Beirut.

Residents of Karantina and other damaged areas do not have to rely on help from the Lebanese government. The old government had to resign after the explosion. A new government has still not been formed after more than two months. Lebanon’s president, Michel Aoun, informed the United Nations in September that his government cannot complete the rebuilding on its own. He asks for international help.

European governments, in the past willing to lend a helping hand to Lebanon, are now reluctant, however. French President Macron recently warned of ‘corruption’ that has permeated all layers of the Lebanese polity. The Netherlands wants to attach ‘conditions’ to aid in a European context, because otherwise it may fall into the wrong hands.

An example is the state of affairs surrounding a shipment of tea that Lebanese President Michel Aoun received from the Sri Lankan government the day after the explosion. The tea was intended as an emergency ration for Lebanese who had been left homeless by the explosion. But in the affected neighborhoods, they never got to drink the tea, as President Aoun gave the tea as a gift to “the families of soldiers in his bodyguard,” according to an official statement.

The fact that Beirut is showing signs of recovery is due to private initiative. In addition to official aid organizations, there are numerous spontaneous actions, ripe and green mixed together. Young highly educated Lebanese raise money for rebuilding through Instagram and other social media. Lenders, often wealthy Lebanese in the diaspora, choose which house they want to have tackled on the basis of photos.

“As if you won the lottery,” said Razmieq Masserijan, a resident of Karantina who was visited by two young Lebanese shortly after the explosion to say that his home would be restored with money from an American donor. The back wall, which was torn and about to collapse, has been repaired and freshly plastered. The blown-away front door has been replaced by a black one with copper fittings.

“Actually, it shouldn’t be like this,” says one of the men who are committed to restoring this house, 34-year-old architect Peter Zazi. In his own words, he and friends raised more than half a ton in dollars for the repair of homes in Karantina. ‘If such an explosion happened in the Netherlands, the area would be cordoned off and only official rescue workers would be allowed to work. Here the government doesn’t even have a database of the damage. ‘

33-year-old Marc, banker and chairman of the Lebanese aid organization Offrejoie, also operates in this chaos. “When people see me, they feel that they no longer have the right to complain,” he says of his own appearance in the ruins of Beirut. Marc has not been in a wheelchair for very long. Only four years. He broke his neck in a diving accident.

But now, please, let’s not go straight to Marc himself. He prefers to talk about the damage assessment, completed within a week of the disaster. About the shopping list he sent to construction companies, who made massive amounts of glass, window frames and building materials available. Free, despite the economic crisis that had already hit Lebanon before the explosion. Another thing: within 48 hours of the disaster, no fewer than six thousand volunteers registered with Offrejoie.

“I’d never done anything like it,” says one of them, 26-year-old Sirenah Tannourine, who spends her days clearing debris, lugging sandbags and passing rocks. ‘In my own profession, I am a tourist guide, there is no work right now. I think you should help, you can’t sit at home. ‘

Marc is of the clear promises. “Your facades will be restored before winter,” he told residents of 44 properties in six poor streets in Karantina and the equally poor part of an adjacent neighborhood, overlooking Beirut harbor in August. The residents see it becoming more reality every week. It is “a message of hope against political chatter.”

The mokhtar of the district

In Karantina, the government only shows itself in the presence of soldiers and the ‘mokhtar’, a cross between a town clerk and a district elder. Hagop Aznavourian has been a mokhtar in Karantina for thirteen years and does not ignore it: he does not live here and has hardly any ties with his own neighborhood. He does not know which of his subjects were killed in the explosion. “I’ve been here little in the past thirteen years, until the explosion.”

But since the explosion he has suddenly been in Karantina every day. You cannot trust its residents with all those generous aid workers, he says. “Give them one sandwich and they want ten.” In his own words, he sees to it that relief goods in the neighborhood are distributed ‘fairly’.

“We are here because the government is not here,” says Marc. He has appeared on Lebanese television, has been honored by the United Nations and does not mince words when it comes to the problems in his country. ‘The government doesn’t exist here. She was not there to provide support after the explosion. The government failed to make a plan and it failed to support aid organizations in their work. ‘

Marc says he will not receive cooperation from the Lebanese authorities. On the contrary. Police recently stopped work at a flat Offrejoie is renovating. On the twelfth, top floor, a resident turned out to be doing odd jobs without a permit. ‘But then you have to talk to that resident, not us. They said we had to leave. I was furious. I said: we will immediately stop all work in the neighborhood and the state can deal with the residents. ‘

Furious civilians didn’t take it. The atmosphere became menacing. “The police had no choice but to leave.”

While Marc inspects the facades in Karantina, a volunteer gently bends his right arm back and forth. He was only 29 when he hit a rock in the fall of 2016 while diving in the sea off the Lebanese coast. Unconscious to hospital. High spinal cord injury. Physically he can no longer do much himself.

When the accident happened, Marc was the youngest branch manager of a bank ever in Lebanon. His employer, Banque Libano-Française, made it clear that he would keep his job: not a matter of course in a country where people with disabilities are still often hidden away. While Marc was rehabilitating in the United States, the bank building was made wheelchair accessible. Marc calls his work ‘a rescue’.

At Offrejoie, the relief organization that has its roots in the Lebanese Civil War and where Marc has been volunteering since his teens, he was only elected chairman after the accident.

Getting out of bed is already a big effort for Marc. Never mind bumping through the uneven streets of Karantina in a wheelchair, negotiating with a government that is not exactly rolling out the red carpet for organizations that want to make the neighborhood livable again.

How does he keep up? Meet Marc’s secret weapon. Here she comes, in white sneakers. Dark curly hair. Almond-shaped eyes. His fiancé, 30-year-old Elyse Bou Ghazalé. They only met after the accident. Elyse was one of Marc’s intensive care nurses. ‘I could have sued the hospital, because of course that is not possible, from a nurse who takes care of her patients’, chuckles Marc.

Elyse remembers long conversations when Marc woke up from his coma. One night she took her parents to Marc’s hospital bed. In Lebanon, parents’ opinions matter when it comes to partner choice. “That first visit was crucial for them to accept him.” They kept in touch daily while he was rehabilitated in Chicago.

“We have to meet,” said Marc as he returned to Lebanon. It was the first time she saw him in a wheelchair. ‘Very uncomfortable. I spent fifteen minutes in the car to prepare for it. ‘ At that appointment they kissed. “That was complicated,” says Marc. “But she seemed like a woman who had made up her mind.”

When Marc is not being chased by residents for a while, he turns his wheelchair to a restored apartment complex. The facade is painted in the original yellow color from 1930. No aluminum trash, but beautiful wooden frames. The traditional shutters painted blue. Just remove the scaffolding and then, beams Marc, ‘this street looks better than before the explosion’.