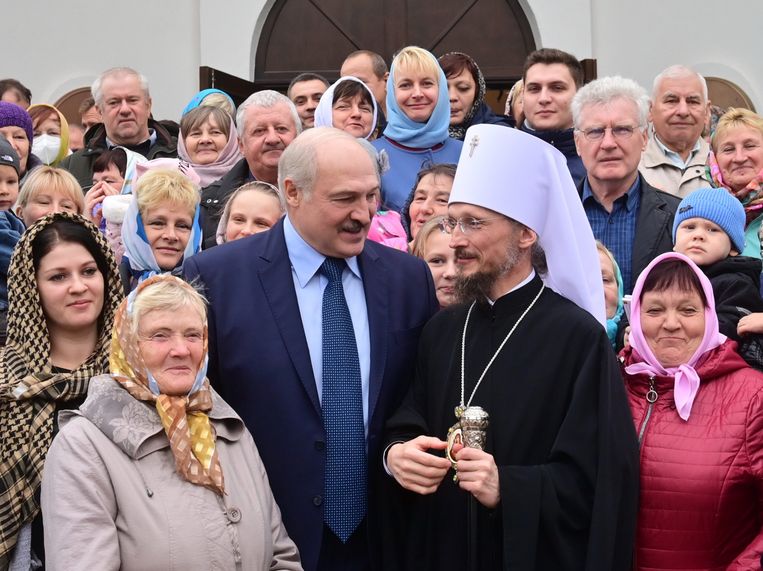 Lukashenko now tries with kindness. He spoke to imprisoned opposition leaders and granted them house arrest in lieu of a cell. But it shouldn’t help. The time to talk seems to be over, the EU is pulling the sanctions out of the closet and even ally Russia is growing criticism.

Alexander Lukashenko is starting to see that he cannot lead Belarus without legitimacy from the population. After two months of repression, the self-proclaimed president is now seeking rapprochement with the opposition for the first time.

On Saturday, Lukashenko sat down with his detained opponents in a KGB prison, he says, to discuss constitutional revisions. Released video footage shows Lukashenko facing off against his main challengers, including former presidential candidates Viktor Babariko and Sergei Tichanovsky. Lukashenko had them imprisoned in the spring on charges of financial crimes.

After the meeting, two opposition members were allowed to leave prison and their detention was commuted to house arrest. The others were allowed to visit a bathhouse. There they could talk to each other without the presence of KGB agents.

“With this meeting, Lukashenko acknowledges the existence of political prisoners whom he previously called criminals,” wrote the runaway opposition leader Svetlana Tichanovskaya on her blog in messaging app Telegram. “This is thanks to our pressure.”

Her husband was allowed to make a phone call from prison for the first time – Tichanovskaya and Tichanovsky had not spoken since May, when Tichanovsky was incarcerated after running for election. In the telephone conversation, he asked Tichanovskaya to keep up her political struggle and be ‘tougher’.

But Lukashenko is not yet prepared to make any real concessions. On Sunday, a day after his conversation with opposition members, he dropped new protests. More than 700 people were arrested in Minsk. Video footage from a detention bus shows how arrested protesters are forced to run through a hedge of guards, while the guards beat the hopeless detainees with their clubs.

The opposition therefore sees the 4-hour meeting in the KGB prison only as confirmation of Lukashenko’s weak position. “Dialogue does not take place in a prison,” said Tikhanovskaya. She and hundreds of thousands of protesters in Belarus are holding on to their initial demands: the release of political prisoners and new elections.

The European Union also considers Lukashenko’s conversation with the opposition a farce. Heiko Maas, the German Foreign Minister, said Monday that Lukashenko would be on the EU sanctions list. “EU ministers have given the green light to prepare a package of sanctions that will also target Lukashenko personally.” Earlier, Brussels emphatically did not put the Belarusian leader on the sanction list to leave room for a final mediation attempt.

Lukashenko is desperate to find ways to end the demonstrations. “You don’t rewrite the constitution on the street,” he said during the meeting with opposition members. But now that his visit by no means stops the demonstrations, he suddenly screens again with violence. On Monday, the interior minister threatened to use firearms against protesters.

But it is not only the ongoing demonstrations that make it impossible for Lukashenko to lead the country. Deeper in society, landslides have taken place that cannot be reversed. For a large part of the population, Lukashenko’s regime has become unacceptable after the denial of the coronavirus, unprecedented electoral rigging and the arrests and torture of its own citizens. There is no longer any trust between government and citizens. Anyone who still cooperates in Lukashenko’s system ends up in social isolation.

Moreover, the female half of the population now faces Lukashenko: women have been dismissed by Lukashenko for three decades as housewives with no leadership qualities, but they are now leading the fight against Lukashenko’s male clan.

The Kremlin is aware of Lukashenko’s weak position. So far, President Putin has held Lukashenko in power to prevent his own nightmare from becoming a reality in a friendly neighbor: a population that forces the departure of an autocrat who falsifies elections through street protests. But Russian MPs openly suggest that a different long-term solution is needed. Leading parliamentarian Konstantin Zatoelin recently said in Russian media: “Belarus under Lukashenko is a dead end.”