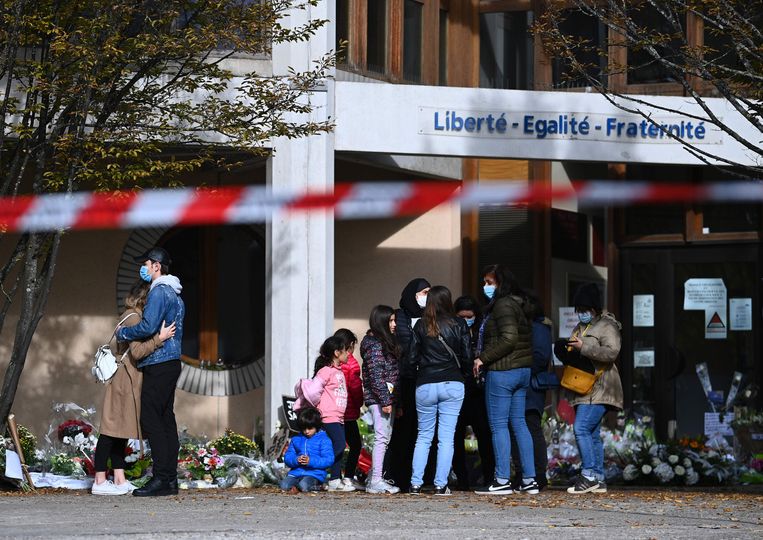 Teacher Samuel Paty didn’t want to offend anyone when he showed a cartoon of Mohammed. It was teaching material, nothing more. But he was immediately portrayed in social media as an Islamophobic villain, and the message reached the 18-year-old Chechen who would behead him. Now he is a martyr.

An enthusiastic, patient, passionate teacher. The teacher everyone wanted. Samuel Paty, the 47-year-old history and geography teacher who was beheaded by an 18-year-old Islamist terrorist a few hundred meters from his school in quiet Conflans-Sainte-Honorine on Friday afternoon, was much loved, it turns out in the days following his death. The brutal murder will make him go down in history as a martyr for the free word.

After completing his studies in Lyon, Paty became a teacher in 1997. Like many young French teachers, he started his career in the Paris region. Five years ago he was accepted at the Collège du Bois d’Aulne in Conflans, a rural town on the Seine, about 25 kilometers west of the capital.

Paty was known as an enthusiastic teacher who was always up for a joke. When someone in his class threatened to doze off, he suddenly shouted very loudly ‘Kinderbueno’, a former student told the newspaper Libération. “He could handle the clowns in the class well,” said another student, “because he was the biggest joker himself.” If he had to, Paty could be strict, but that didn’t affect his popularity. “We all wanted him as a teacher.”

Paty, who always wore a shirt when he stood in front of class and who could often be found at the local tennis court in his spare time, has also taught the Enseignement Morale et Civique (EMS) course, a kind of social studies for a number of years. This course deals with themes such as laicité, the strict French model of separation between church and state, and freedom of expression. Of a rare bitter irony is the fact that EMS classes were introduced in France as a response to the attack on Charlie Hebdo in 2015.

On Monday, October 5, Paty says something to his class what he had said earlier years when he had ended up at that particular EMS class: “ Tomorrow I am going to show you a drawing that some of you who believe in Islam, may have. shocks. If you want, you can leave the class, close your eyes or avert your gaze. ‘ One of his students then starts shouting that she is not going to leave the class. She cannot be pacified and is sent to class and suspended for two days.

The next day, when Paty shows the caricature in question, a Charlie Hebdo cartoon of Mohammed naked on all fours, to his class, the suspended girl is at home. Her father, who is outraged by the turn of events, posts a video on social media. In this he gives a distorted picture of the situation: according to him, Paty ordered all Muslim children to leave the classroom. He calls the teacher “a villain” who should be “stopped.”

In all, the father – Brahim C., one of 15 people currently in custody for questioning – is making three videos urging people to take action against Paty. He is making one of those films with Abdelhakim Sefrioui, a controversial self-appointed imam known to the French authorities as being radicalized. Sefrioui has also been arrested and is being interrogated.

On his Facebook page, C., whose half-sister joined IS in 2014, calls for a ‘mobilization against the teacher’ that would create ‘an Islamophobic climate’. He calls on his followers to approach the Collectif contre l’islamophobie en France (CCIF) about the matter. In the meantime, threats are arriving at the school’s principal.

Not much later C. filed a complaint against Paty for ‘distribution of a pornographic image’. Paty in turn files a complaint against C. for ‘public defamation’. Two different parent associations alert the rector about the videos about Paty circulating on social media. “I thought: he is at a huge risk, he must be protected,” said an anonymous parent Le Figaro. The rector announces that ‘the affair is being monitored’. Despite the threats that come into the school, Paty is not protected.

Meanwhile, C.’s videos are being distributed by broad-based Islamic organizations, including the Great Mosque in the Parisian suburb of Pantin. The films reach tens of thousands of people, including Abdoullakh A, an 18-year-old Chechen from Évreux, a city eighty kilometers away. The gruesome outcome is known.

A. didn’t know Paty. Once he arrived at the school grounds in Conflans, he offered students money in exchange for information about the teacher, presumably so that he could recognize him. At least one student has received an amount from him. He is in custody and interrogated, as are three other students. Whether he actually gave A. information is unknown.

According to the French news channel BFMTV, A. has also contacted Brahim C. and Abdelkarim Sefrioui, the creators of the videos on social media. It is not known whether they answered his messages.

Samuel Paty, who was recently divorced and bequeathed a five-year-old son, has become a national hero and a martyr for free speech in just a few days since his death. On Wednesday evening he will receive a national tribute in the Sorbonne in Paris. His school in Conflans may be named after him. There are calls to bury him in the Panthéon, the final resting place of great French like Victor Hugo and Voltaire.

Samuel Paty, the teacher everyone wanted, is now a martyr for the free word
Kind, patient, humorous, involved. Students and parents are short of superlatives for Samuel Paty, the 47-year-old history and geography teacher who was beheaded by an 18-year-old Islamic terrorist a few hundred meters from his school in the quiet Parisian suburb of Conflans-Sainte-Honorine on Friday afternoon.

French take to the streets after decapitation of teacher
In Paris and many other cities, citizens took to the streets on Sunday to demonstrate for freedom of speech, and to pay tribute to the teacher Samuel Paty who was beheaded with a kitchen knife in broad daylight by an 18-year-old Muslim extremist on Friday.