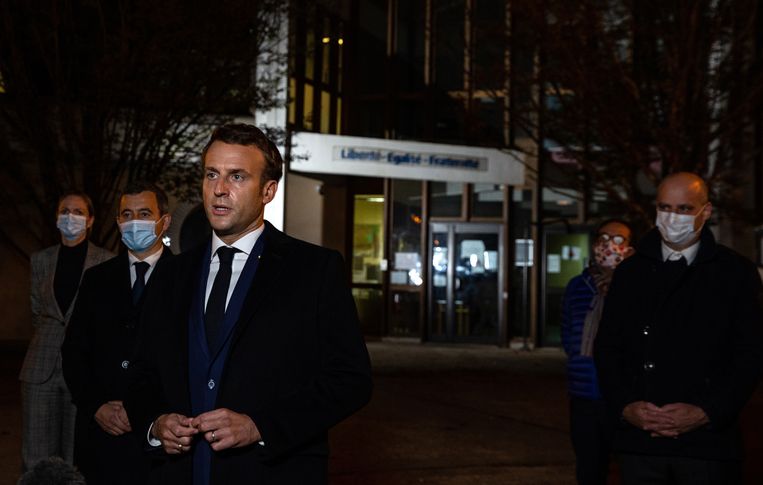 These include the Collectif contre l’islamophobie en France ‘(CCIF). According to Darmanin, this association contributed to the spread of ‘a fatwa’ about the murdered teacher in the run-up to the attack. The government will also address social media for ‘their complicity in the spread of hate preachers’.

Although there is still a lot of uncertainty about the exact facts of the terror attack in the quiet Parisian suburb of Conflans-Sainte-Honorine, more is known about what happened on social media in the weeks before the beheading. Shortly after the attack, a video of the father of one of Samuel Paty’s students, the headless teacher, surfaced.

In that video, recorded a week earlier, the father, Brahim C., called Paty “ a villain ” because he showed a cartoon of the Prophet Mohammed to his class (and his Muslim students had recommended “You have his name and address to say STOP,” C. said to the other parents. According to Darmanin, this was ‘a fatwa’ pronounced on the Paty.

It is now known that Brahim C., who is one of the eleven people currently detained for interrogation, has distributed a total of three films in which he calls on people to take action against Paty. He made one of those films together with Abdelhakim Sefrioui, a controversial self-appointed imam known to the French authorities as being radicalized. Sefrioui has also been arrested and is being interrogated.

Brahim C. addressed the CCIF in several Facebook posts. Let’s all say: DO NOT TOUCH OUR CHILDREN. Contact the CCIF. ‘ For the time being it is unclear whether the CCIF actually distributed those videos on its own site. The minister will nevertheless have an investigation into whether the CCIF and a number of other comparable associations can be dissolved.

Darmanin also said that the French justice has started an investigation into “dozens of individuals.” These are people suspected of spreading extremist Islamist ideas online.

President Macron’s government appears to be moving forward with its words remarkably quickly. “The fear is going to change sides,” the president had said earlier in response to the attack. “Islamists should not be able to sleep peacefully in our country.”

The French government will meet with representatives of social media on Tuesday. According to the government, these are “widely used to spread calls for violence.” The social media, according to the government, is “complicit in a public lynching party” – this means the distribution of the videos of Brahim C. The Secretary of State for Citizenship, Marlène Schiappa, spoke of “cyber-Islamism”.

The perpetrator of the beheading, an 18-year-old Chechen from Evreux, a town 80 kilometers from Conflans-Sainte-Honorine, is said to have acted after seeing those videos on Snapchat.

After the attack, about 80 statements of support for the perpetrator appeared on social media. The French judicial authorities are investigating the source of these messages and intend to prosecute the senders.

French take to the streets after decapitation of teacher
In Paris and many other cities, citizens took to the streets on Sunday to demonstrate for freedom of speech, and to pay tribute to the teacher Samuel Paty who was beheaded with a kitchen knife in broad daylight by an 18-year-old Muslim extremist on Friday.

Main suspect stabbing Paris refers in confession to Mohammed cartoons
The main suspect of the stabbing in Paris near the old office of the satirical magazine Charlie Hebdo has made a confession. Sources close to the investigation have reported this to the French news agency AFP. Two journalists were seriously injured in the stabbing at the end of September.

Georges’ daughter is a victim of ‘Bataclan’, Azdyne’s son a perpetrator. They wrote a book together
Georges Salines and Azdyne Amimour both lost their 28-year-old child. One was a victim, the other a perpetrator. In their book After the Bataclan they wonder: How could their children’s lives be so different?