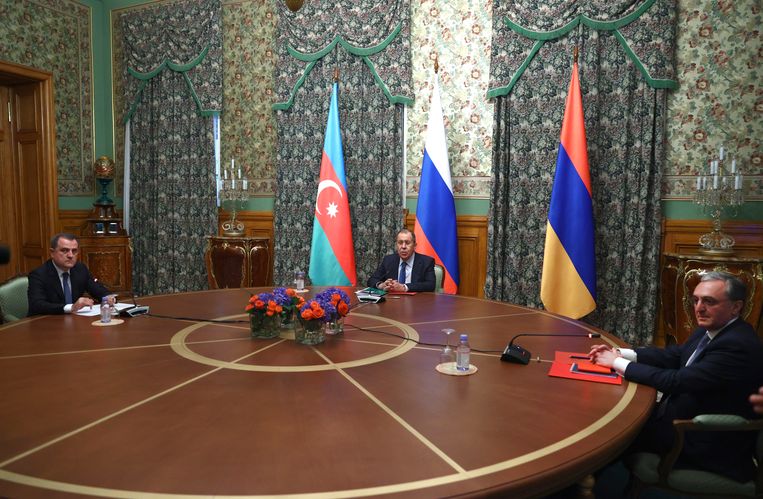 Lavrov announced this last night at 3:00 am (local time, 2:00 am in the Netherlands) in Moscow, after delegations from both countries had held talks for 10 hours in the Russian capital. According to the Russian minister, Armenia and Azerbaijan have also agreed to start talks on a solution to the conflict.

Russian President Vladimir Putin had invited both countries to peace talks in Moscow. Russia has good ties with both Armenia and Azerbaijan. The two countries had been fighting again for two weeks over the controversial Nagorno-Karabakh region, where mainly ethnic Armenians live. International leaders had also called for an end to the fighting, but this had not yet had any concrete results.

On Thursday, the so-called Minsk group planned consultations about a ceasefire in the area. This group of the Organization for Security and Co-operation in Europe (OSCE) is mainly formed by France, Russia and the US and has been trying to find a solution to the conflict since 1994. According to Lavrov, the Minsk group will mediate in the talks between the two countries.

The Armenian Foreign Minister and his Azerbaijani counterpart did not speak to reporters.

Fighting in recent weeks is the worst since a war in 1991-94 that killed about 30,000 people and ended in a ceasefire that has been repeatedly violated. Azerbaijan said on Friday that since September 27, 31 Azerbaijani civilians have been killed and 168 injured. It has not released any information on military casualties. Nagorno-Karabakh said 376 of its military personnel and 22 civilians have been killed since the start of the conflict.