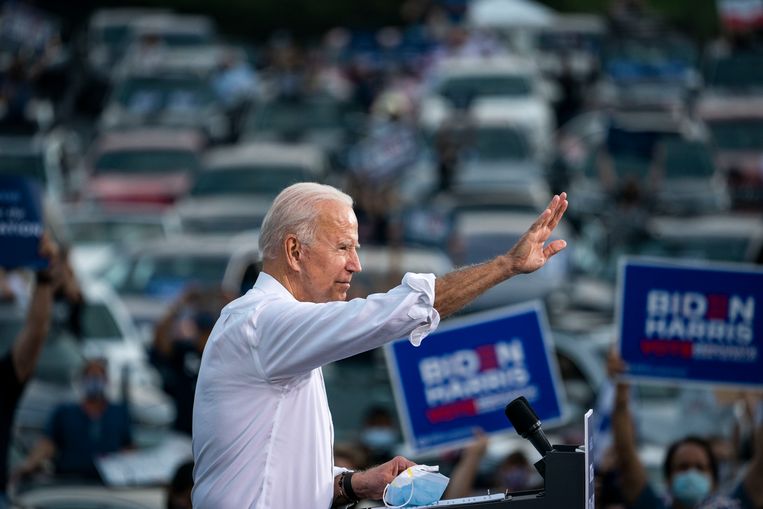 It is uncommon for a presidential candidate to spend precious time in states that he does not need to win so right before the election. The step of Biden, who has been leading the polls for months, shows his growing self-confidence. At the same time, he increases the pressure on Trump who is fighting for his reelection.

“Not many experts would have said four years ago that a Democratic candidate would be campaigning in Georgia in the last week of the election,” Biden said at a rally in Atlanta on Tuesday. “If we win Georgia, we win everything.”

However, the southern state never again voted for a Democratic candidate after 1992. However, in an average of various Real Clear Politics polls, Trump and Biden are equal in Georgia. If Trump loses this Republican stronghold, he will be president.

The loss of Iowa, which Trump won in 2016 by more than nine percentage points, could also be devastating for the president’s chances. But in this state, Biden also smells blood, encouraged by the favorable polls. The Democrat even leads the way in an average of various polls, even if it is minimal: 1.4 percentage points. Biden’s attention to both states is also designed to support Democratic Congressional candidates.

Biden’s visits bring back memories of the Clinton debacle four years ago. Convinced that a victory over Trump could no longer escape her, Clinton turned to three states, such as North Carolina, in the last days of the campaign, which she did not even need to get 270 electors. This number is needed to become president. Clinton neglected a group of Democratic states she thought she already had safely in her hands.

She didn’t even visit one of those states, Wisconsin. Clinton also campaigned, like Biden now, for Democratic candidates to increase their chances in the Senate and the House of Representatives. The loss of Wisconsin, as well as the Democratic strongholds of Michigan and Pennsylvania, ultimately cost her the presidency.

The Clinton camp was then misled by the favorable predictions, in the media and in the polls, of its lead in the Electoral College. Biden too would easily win enough electors now, if these forecasts are correct. In the CNN calculation, for example, he is at 290 electoral votes and Trump at 163. Biden would not even need important swing states, such as Florida and Ohio, to become president.

Biden’s visits to Georgia and Friday to Iowa are also notable for his limited campaigning. While Trump travels madly through the handful of states that will determine the election every day, Biden has kept his campaign visits to a minimum. This has never been seen in the last week of a presidential race. On Monday the Democrat had not planned anything, on Tuesday he showed up alone in Georgia and today he will be briefed close to home about the pandemic.

Joe Biden visited Georgia on Tuesday for the first time since clinching the Democratic Party’s presidential nomination, and he promised to deliver “hope and healing” to the nation’s soul as the race for the White House nears the finish line: https: // t. co / L0IEmbPzKY pic.twitter.com/md90v6O4AY

Typical of Biden’s growing optimism is that on Tuesday he had former President Obama campaign in much more important Florida and went to Georgia himself. Florida is a crucial one swing state which was won by Trump in 2016. If Biden succeeds in defeating Trump in Florida, the president will have virtually no path to the 270 electoral votes. Whoever wins in Florida will receive 29 electoral votes.

For the past two days, the president held an average of about three meetings a day, attended by thousands of visitors, in several states simultaneously. Trump appears twice in Arizona on Wednesday. Trump’s campaign rallies show that he is desperately trying to preserve the states he won four years ago. On Tuesday, he even appeared in Nebraska, like Georgia, a Republican stronghold for decades.

This visit once again shows how the president has been put on the defensive. Trump wants to prevent Biden from getting one of Nebraska’s five electoral votes. The Democrat can win this one if he scores well in any part of the state. This one elector can be crucial when the results get very tense.

Thousands of supporters braved the cold weather, and the pandemic, to see the man who won Nebraska by an odds of 200,000 votes in 2016. Trump’s self-confidence is also high these days. He is convinced that the polls, just like in 2016, are incorrect.

Furthermore, he constantly points to the many followers who come to his meetings. This was also an indication four years ago that a surprise was imminent. “Joe Biden shows no respect for you by not campaigning here,” the beleaguered president told visitors in Nebraska. “He’s never been here, has he?”

Hours in line to vote Trump out: ‘I want him out. That’s what I came for ‘
Voters in New York can also go to the polls earlier this week, and that is happening en masse. They stand in line for hours. “I want to be able to say that I helped get him out.”

US Supreme Court ruling on postal voting is in favor of Republicans
The US Supreme Court has cut short by broadening the rules for counting postal votes in Wisconsin, one of the states under pressure in next week’s presidential election.