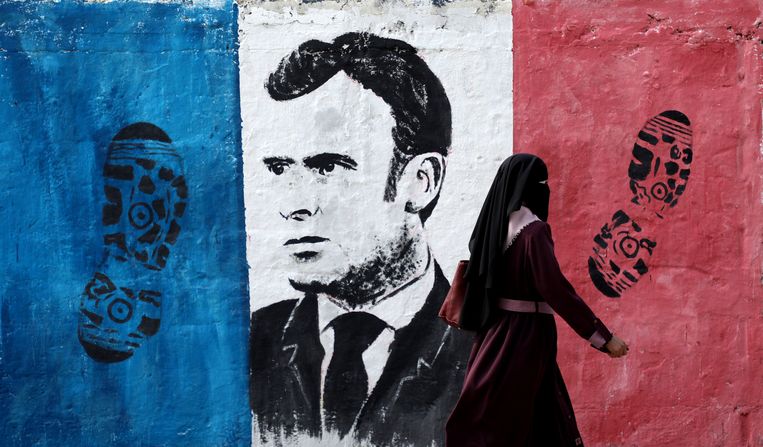 There is little chance that Emmanuel Macron has been awake from the insults that have befallen him in the Islamic world in recent days. If anyone is used to being taunted, it is him. Devil-eared Macron, as a Pakistani newspaper portrayed him, is an image that would have fitted seamlessly into the iconography of the yellow vests.

Still. Anyone who would have predicted in 2017 that Macron would be seen by a significant part of the world as an Islamophobic hardliner who is out to step on all Muslims’ souls would have been declared crazy. At the time, the general view was that the global advance of right-wing populism had been temporarily halted by a young progressive-liberal Frenchman.

Three and a half years later, Macron is mentioned in the same breath as the leader of the PVV. ‘Macron and Wilders, the two faces of hatred and racism in Europe’, headlines the English-language Turkish newspaper Daily Sabah. How is it possible that the French president is suddenly seen as the great bogeyman of the Muslims?

The first observation is that Macron has emerged as a considerably more right-wing president than might be expected on the basis of his election campaign. This also applies to his ideas about an adequate fight against radical Islam. “When we debate Islam, we often confuse everything,” he said in 2016. ‘To revive that debate every time there is an attack is madness.’

The fact that after the murder of Samuel Paty the same Macron rather rücksichtslos ordered the dismantling of a number of Islamic foundations, has raised eyebrows among French Muslims. The government also announced “monitoring visits” to 50 Islamic organizations. In many cases it is unclear exactly what they did wrong. According to his critics, Macron also makes peaceable Muslims suspect, a pitfall he warned about as a presidential candidate.

The harsh measures – the Anglo-Saxon press soon called it a ‘crackdown’ – are not the only reason for the anti-Macron propaganda from Islam. In early October, Macron said that “Islam is in crisis everywhere.” By this he meant that fundamentalism is gaining ground everywhere, but his statement was seen by many Muslims as an affront. His will to create “an Islam of the Enlightenment,” a progressive-liberal interpretation of Islam compatible with French values, is paternalistic to critics.

In the same speech, Macron admitted that France “created its own separatism.” “We have concentrated the educational and economic difficulties in some neighborhoods and we know it very well.” He also recognized that France’s colonial past plays a role. “The trauma has still not been resolved,” the president said. But after the attack on Paty and the manhunt for Islamism that followed, that hand snowed in its own bosom.

The longest fuse in the powder keg was, not for the first time, through the publication of Mohammed cartoons Charlie Hebdo. The hard-satirical magazine decided to reprint it to draw attention to the lawsuit about the 2015 attack on the editorial staff. This led to a stabbing at the old editorial building of Charlie Hebdo. Not much later, Samuel Paty was beheaded after showing those cartoons to his class. Macron was forced to defend the ‘right to blasphemy’ without compromise. “We will not give up cartoons and drawings,” the president said.

In large parts of the Islamic world, he was therefore equated with Wilders in the image. That is a fallacy. Contrary to Wilders, as far as is known, Macron never declared a competition for Mohammed cartoons, or proudly posed with such a cartoon. We have no idea what Macron actually thinks of such cartoons. Most likely he is very upset about it.

The cartoons have forced the president into an almost impossible dilemma. A large part of the Muslim population sees them as needless provocation. But in French society, long dominated by Catholicism, the mockery of religion is essential to individual freedom. What, in the French eyes, is a necessary ridicule of religious power, many Muslims experience as kicking down.

Since the attack on Charlie Hebdo the Mohammed cartoons have become an almost sacred article of faith for France. In 2006, then President Jacques Chirac said that “anything that could harm another person’s beliefs, especially religious beliefs, should be prevented.” That is unthinkable now. The chairman of an Islamic umbrella association received a cartload of criticism this week for expressing the same point of view.

“We are trapped with those cartoons,” said French former ambassador Gérard Araud The Washington Post. “We can’t drop them, or say publicly that we think they’re vulgar, because people died for them and people are still dying for them. We have to fight for them, no matter what we think. ”


The cabinet calls on schools and teachers on Monday, just like in France, to consider the murder of French teacher Samuel Paty. Education ministers Arie Slob and Ingrid van Engelshoven ask this at the request of their French colleague minister in a letter to trade unions and umbrella organizations. ‘In whatever way suits best, let’s show our solidarity.’ The flag can be half mast, teachers can talk to each other and / or students, or there can be a minute’s silence, the ministers propose. Paty was beheaded on October 16 by an 18-year-old Chechen Muslim extremist.