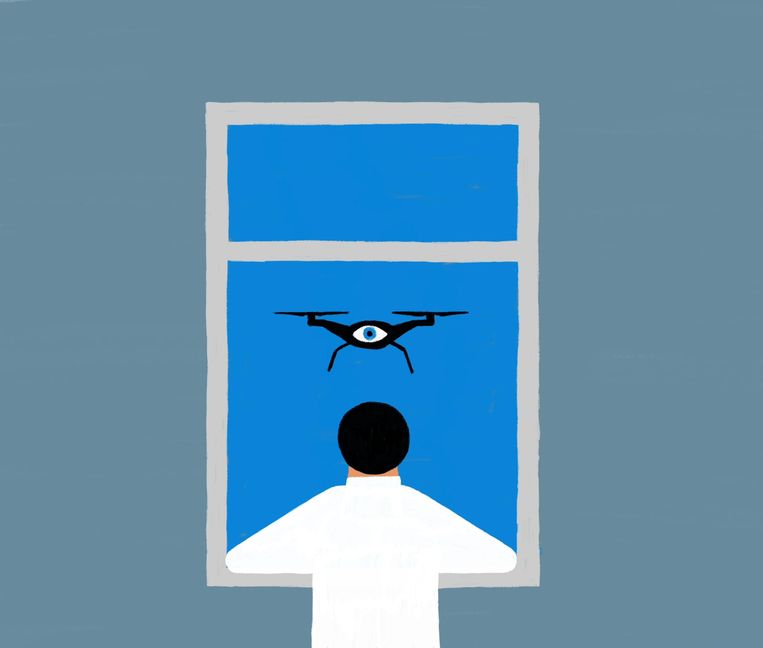 The most recent news item came on Monday: the Ministry of Defense has set up an experimental data center that maps the online behavior of the Dutch. Amazement everywhere in the House of Representatives. But experts see it happening: the government comes dangerously close to people through smart technology.

More cameras flying around in the air, more cameras looking inward along the highways and soldiers looking on the internet to see how civilians behave. These are just three news stories from the last days that seem unrelated, but mark a broader trend. The government is increasingly penetrating the private life of citizens – using all available technologies to do so. Experimental or proven. Legal or over the edge.

Would you rather listen to this story? Below is the version read by Blendle.

The police will purchase more drones to support surveillance. Now there are already 60, there will be 130. ‘It offers many new possibilities. We can mount anything on the drones. Cameras, thermal images, speakers, light ‘, Peije de Meij told NOS. Last year, the police used drones 600 times, this year already 200 times, including for monitoring (disobedient) behavior during demonstrations.

At the same time, the police are introducing a new tool in the fight against appending drivers. Cameras above motorways already register all number plates that pass by. ‘Smart cameras’ will soon go a step further: they check in the car to see if someone is holding their phone. This puts the Netherlands at the forefront of Europe. “The goal is that everyone becomes aware that someone can watch anytime and anywhere,” says the OM One today.

And then there is defense, where a unit has collected large-scale data about the online behavior of Dutch citizens since the start of the corona pandemic. It was an experimental project and the mandate for that data collection was missing, according to a reconstruction of NRC Handelsbladbecause the powers of defense are limited on Dutch soil. Out of curiosity and frustration, the unit nevertheless started the project, after which the leadership of defense intervened.

The danger of ‘function creep’

‘Step by step, the government is getting deeper into people. Every separate step to do that seems reasonable, but all in all the impact of all those steps is much greater than all the steps added together, ‘says Dennis Broeders, associate professor of security and technology at Leiden University. He gives as an example function creep: technology is first used to achieve a specific goal (license plate cameras keep dirty cars out of the centers of cities) but the technology also turns out to be useful for other purposes in the long run (tax authorities use the database with registration data to check whether lease drivers use their car privately) . Brothers: ‘Function creep is intertwined with digital resources. At some point, technology can do more than it was originally intended for. When asked about this, politicians say in advance: “We’ll see that again.” They don’t want to dwell on the moment when that question becomes relevant. ‘

According to Broeders, the Dutch government still has a lot of ‘techno enthusiasm.’ If there is a problem, there is an immediate tendency to look for a technological solution. Especially when it comes to safety.

The corona crisis is the perfect example. Minister Hugo de Jonge (Public Health) presents one technological plan after another, for example to collect all location data from mobile devices in order to accurately map travel movements. The Dutch Data Protection Authority corrected him: that is not possible without a new law. Chairman Aleid Wolfsen: ‘We must always keep thinking: which data is really necessary and which is not. So not: download as much data as possible and then see what is useful. ‘

The risk is ignored

Brothers recognizes this type of government thinking. ‘We have a new, shiny tool to solve it. This often sounds reasonable, as it is plausible to catch drivers appending with smart cameras. ‘ The privacy concerns are addressed in a law or rule (‘the stake must be proportional’). Broeders: ‘Then, nobody sees the risk of using all those technologies and data collections together. I find that fascinating. ‘ This has to do with the nature of the risk. This is clear with a nuclear bomb: the chance of an explosion occurring is nil, but the impact if it does happen is gigantic. In the digital society, the risk is somewhat everywhere. Privacy is violated a bit here and there, data is collected in various places and there is a data leak here and there. Broeders: ‘But the fact that the risk is spread does not make it any less great or serious. It’s just not experienced that way. ‘

Governments tend to see privacy as a limitation in their actions, the case at defense shows. In the Netherlands, this organization is not allowed to conduct online research in public sources into the behavior of citizens, such as the National Coordinator for Counterterrorism and Security or the intelligence service AIVD. In the monthly magazine Carré of the Dutch Officers Association states how frustrating employees find this. ‘For example, the Open Source squadron of JISTARC in’ t Harde is more or less idly waiting for some form of commitment to actually be allowed to do something, as is the Defense Cyber ​​Command. (…) Even training and practicing on the internet is almost impossible because, according to our own (defense) lawyers, ‘the law’ creates all kinds of barriers against violating the privacy of citizens. ‘ The magazine also expresses another frustration: because don’t citizens give away their data in all kinds of ways? ‘Are we out to systematically and on a large scale keep an eye on the citizens as’ Big Brother’? (While they usually link their personal information to companies and institutions without hesitation and display their private life on the internet.) ‘

This year, a parliamentary committee tried to get ‘more grip’ on the ongoing digitization. The committee was created out of ‘dormant discomfort’ about the digital society. Broeders: ‘But the problem is that the risks fan out in all directions and that we only have limited answers. The Chamber or the Council of State, for example. Vertical organizations with a defined area for horizontal problems that reach much further. Maybe that will suit everyone. ‘ In fact, he says, you should find a way to reduce the expanding ‘data hunger’ of the government as much as it arises: step by step off a little.

‘American NSA spies on European allies, including the Netherlands’
There are new indications that the American NSA is spying extensively on allies in Europe, including the Netherlands. The Americans do this, among other things, on the southern tip of the Danish island of Amager – not far from Copenhagen airport. There they, together with the Danish secret service, process data tapped from internet cables.