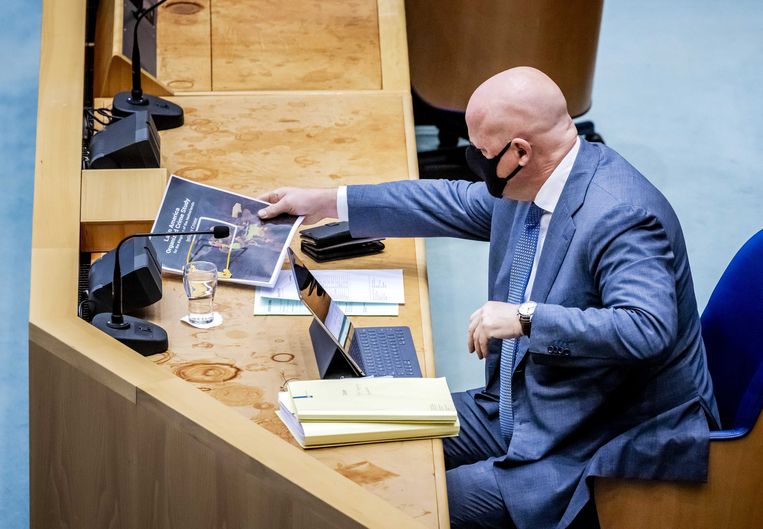 PVV MP Emiel van Dijk has ‘VVD corvee’, VVD MP Bente Becker stated on Wednesday in the debate about the budget of Justice and Security. Asylum and migration receive a lot of attention in this, subjects about which the strict texts of the liberals, according to Van Dijk, are nothing more than ‘gore hypocrisy’. “Your contribution is only about what the VVD would not do well, that is a sign of emptiness,” Becker in turn says to Van Dijk.

She herself was accused a week earlier in an interview with NRC, but in reverse. “PVV corvee, someone must do that in the VVD?” Was the question in response to her harsh positioning on the right flank. “I think that’s really total nonsense,” Becker replied. “It suggests that I only look at the PVV and try to take the wind out of the sails.”

Yet that is exactly what the opposition thinks in the Chamber. The VVD has launched a ‘national crisis plan for migration’, with an opinion article in the AD. If too many migrants arrive, “we should be able to close our national borders and implement border controls if necessary,” Becker said. SP MP Jasper van Dijk sees the plan as a ‘flirt’ with the PVV.

The course of events illustrates how the parties on the right are overtaking each other with strict proposals, how the parties on the left are scoffing about this and how in the meantime the subjects of today are still the same as those when the Rutte III cabinet took office in 2017. Since the Turkey deal from 2015, still under the previous cabinet, has not made any significant progress in the migration file.

It’s a daunting list. Immigration service IND is struggling with major backlogs. Despite an earlier promise by VVD State Secretary Ankie Broekers-Knol, these were not resolved before the end of the year. Status holders are trapped in overcrowded asylum seekers’ centers because they cannot move on to permanent housing. Asylum seekers from safe countries, who are not entitled to a status, cause constant nuisance. Return is not possible. Broekers-Knol is still not welcome to discuss this with the government of Morocco. The development of five National Immigration Facilities, which would make municipal reception facilities with bed, bath and bread superfluous, is not going smoothly.

The most important achievements from Rutte III are a broader children’s pardon enforced by CDA, D66 and ChristenUnie, in exchange for which the VVD saw its wish to release the State Secretary from the discretionary power. It has certainly not relieved Broekers-Knol, and earlier its predecessor Mark Harbers, of all headaches.

In addition to half-hearted national solutions, there are European initiatives, which often failed under the previous European Commission. After much delay, the new Commission has come up with a new migration pact, which Member States are now negotiating further. In the meantime, French president Emmanuel Macron has speculated about restrictions on free travel in Schengen and Prime Minister Mark Rutte did not rule out a mini-Schengen two weeks ago. CDA MP Madeleine van Toorenburg does not want to do that yet. ‘All at your service, but the key to the solution lies in Europe.’ About which Becker wants to be ‘realistic’ and says: ‘If that doesn’t get off the ground, then we have to be ready to keep a grip.’

D66 Member of Parliament Maarten Groothuizen has an African saying. ‘If you want to go fast, go alone. If you want to get far, go together. ‘ There is a lack of agreement in the House, even in the coalition, and we are waiting for Europe. In the meantime, a hard fact remains: two-thirds of asylum seekers have no right to asylum. But they will come. To Europe, and to the Netherlands. In the run-up to the elections, this will undoubtedly provide a lot of food for debate. The cabinet will answer first on Thursday.

In the debate on freedom of speech two weeks ago, Prime Minister Rutte did not rule out a mini-Schengen. You can read it here.

The proposal for a migration pact by the European Commission came out at the end of September. The cabinet wants to prevent premature death, you can read in this analysis.

In June, the House also conducted an extensive asylum and migration debate. In this report you will read that the same themes keep recurring.