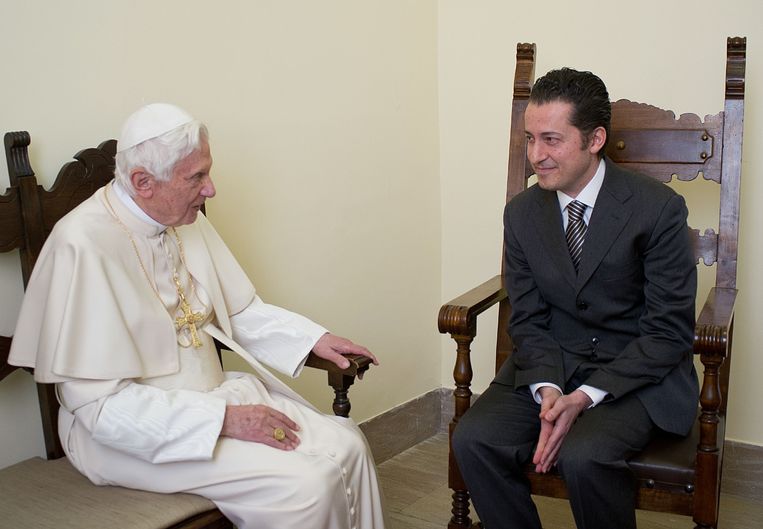 If Gabriele’s life story had been a spy novel, the publisher would probably have stepped in because it sounded far too implausible. Because a butler who steals secret documents about fraud and intrigue from the Pope’s office, smuggles past the Swiss Guards and hands them over to a journalist with a big scar on his face? Of course…

Yet Gabriele’s life turned out exactly like this. After working as a butler in the personal court of the German Pope Benedict XVI for six years, he first began stealing confidential documents in 2012, including the Pope’s personal correspondence from his own desk drawers. He said he wanted to cause “a shock – perhaps through the media – that could put the church back on the right track.” Gabriele loved the Holy Father dearly and could not bear to see that corruption in the Church was rampant under his rule.

That is why he handed the bulk of the documents to the Italian investigative journalist Gianluigi Nuzzi, who wrote several books on the basis of them – often disconcerting reports about the inadequate financial management within the church, the total absence of internal controls, the fraud of cardinals who live like princes. of money that was actually meant for charity, and so on, and so on.

It turned out to be the start of the gigantic Vatileaks-scandal. In fact, according to Vatican experts, Benedict XVI’s inability to deal properly with that crisis was one of the reasons that he took the unprecedented decision to resign in 2012. It is not without reason that one of the first promises made by his successor Francis was to put things in order financially.

Two weeks after the publication of Nuzzi’s first book in May 2012, it was announced that the butler – until then invariably referred to as il corvo, the raven – was behind the leak. He was immediately arrested by the Vatican gendarmerie, who found over a thousand more confidential documents from the Apostolic Palace during a search of his apartment.

The lawsuit that followed again caused quite a stir in the Italian newspapers. Especially when Gabriele said during one of his first hearings that he had been treated very badly in the Vatican dungeons. For the first fifteen to twenty days he would have been locked in a room where he could not stretch his arms and where the light was on 24 hours a day.

While many Vatican experts were already busy speculating during the trial that the butler was just a pawn in a much larger game of power, he was sentenced to 18 months in prison in October 2012. With that the matter could be buried as far as the church is concerned. A few days before Christmas, Benedict XVI pardoned him and arranged a job for him in the Bambino Gesù children’s hospital in Vatican City. He has not spoken to the press since then.

Gabriele died of a long illness this week, according to the Vatican. He leaves behind a wife and three children.