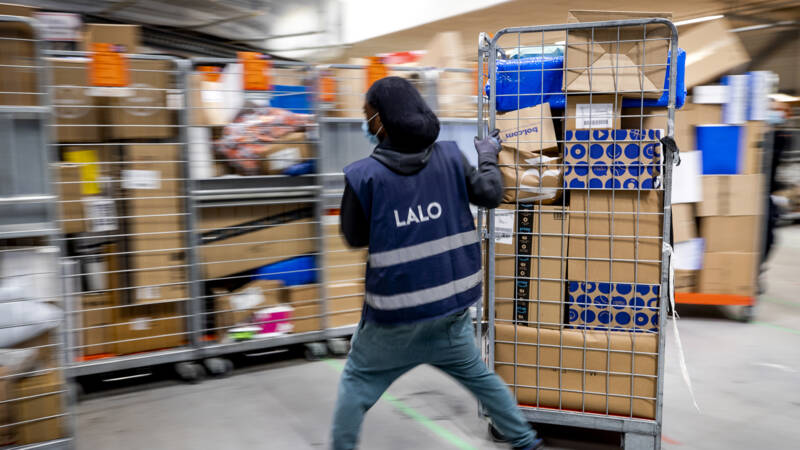 Black Friday is just over when distribution centers and parcel deliverers are getting ready for the next peak days. Christmas Eve, Christmas and of course the now regular hustle and bustle of the corona crisis: it all ensures that online stores send millions of parcels every day. And so extra hands are needed to sort and deliver those packages.

Distribution centers and parcel deliverers have therefore created thousands of (temporary) jobs in recent months. And that while the corona crisis in many other sectors in fact cost jobs. At the same time, there are still concerns about working conditions in the parcel industry.

The distribution center of the Netherlands’ largest web store Bol.com belongs to Ingram Micro. For the peak weeks, the company hires 1,500 extra people for Bol, and hundreds more people will also be working for the distribution of other web stores. Most of the new hires are labor migrants, just like in other years.

Further down the chain, the delivery companies have also temporarily increased their workforce. The Dutch parcel market is in the hands of four major players: PostNL, DHL, DPD and GLS. DHL alone delivers a million parcels a day during this peak period, a third more than last year. And so the company has hired about 3,000 additional people this year as deliverers or sorters.

Some of the deliverers work directly for one of the four parcel giants. But another part works for subcontractors: the people who are commissioned via via to do the actual delivery work. And there it starts to squeeze.

After a continuous stream of examples of deliverers who make 13-hour days, get paid late and have to deliver more and more parcels in the same time, the Inspectorate SZW started an investigation into these subcontractors eighteen months ago. Since then it has been raining fines.

In an interview with NRC at the beginning of this month, the Inspectorate said that nine out of ten subcontractors do not have things in order. More than eighty companies have already been investigated. “We have decided to continue the investigation in the coming year”, a spokesman for the Inspectorate now says.

DHL works with 1,500 deliverers through subcontractors. The problems are incidents, a spokesman said. “Most of them are decent, decent entrepreneurs.” Yet DHL also understands that something must change to eliminate the incidents. Both DHL and PostNL indicate that they want to work together to combat abuses at subcontractors.

Not using them at all is not an option, the spokesperson reports. DHL needs the subcontractors too badly for that. “Buying madness with Black Friday, presents for the holidays, a disease that causes stores to close. These are all causes of temporary fluctuations in demand,” said the DHL spokesperson. “We need a flexible shell to absorb those fluctuations.”

DPD says it “absolutely cannot be recognized” in the picture sketched by the Inspectorate SZW. The company says it does not work with subcontractors at all.

“When we need extra capacity in sorting centers, we work with temporary employment agencies. And that’s what contracts are based on. When it comes to parcel delivery, we work together with a fixed number of couriers. If they need extra capacity, they are responsible for this. To get extra people. That said, we only work with couriers who employ regular drivers who are paid by the hour, not by package or route. “

‘Hardly any insight into distribution centers’

The subcontractors are not the only concern. Employees in distribution centers may also be victims of abuse. “We received signals about too long days, but also about dangerous circumstances such as falling packages or accidents with forklift tricks,” said the Inspectorate spokesman. That is why the Inspectorate has also started an investigation at the distribution centers.

Ingram Micro – the operator of the Bol.com distribution center – also received a visit from inspectors. The company is convinced of a good report. “People remain my most important assets “, says director Jaco Knetemann. “I can’t afford to be bad with my people.”

Trade union FNV confirms that Ingram Micro has things in order. “But it is very good that the Inspectorate is also looking at other centers,” says Mari Martens, sector head Trade at the union. “We have much less insight into that. Many labor migrants work there and hardly any union members.”