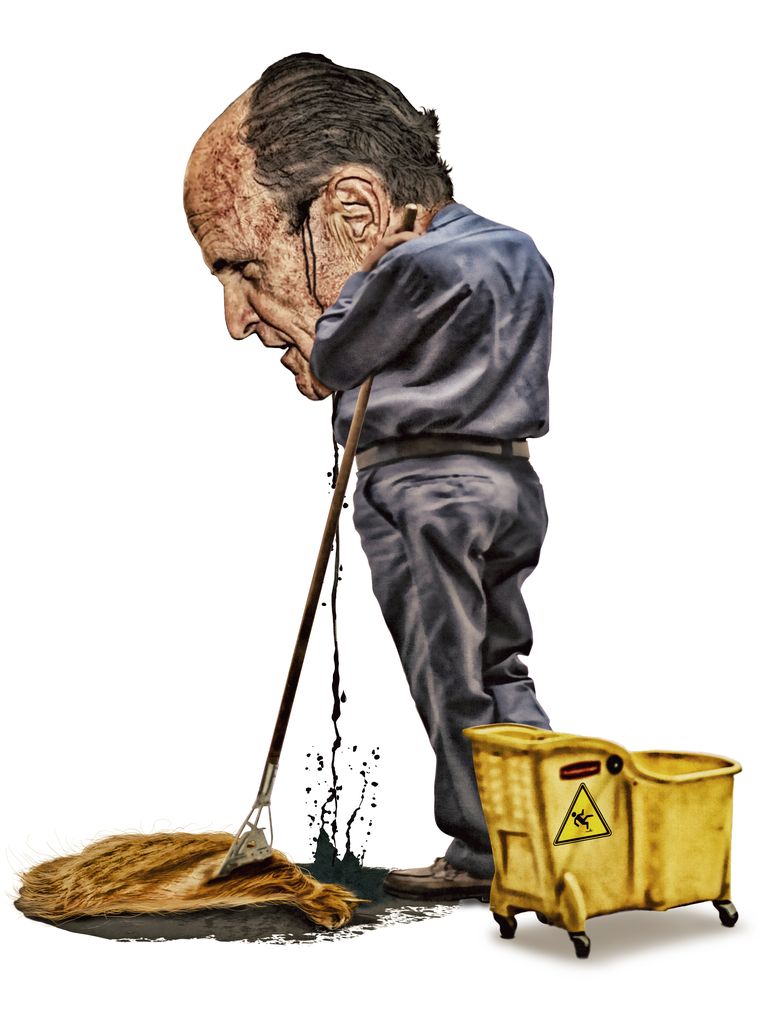 2001: Everywhere the man goes, he gets a standing ovation. The nickname Oprah Winfrey has coined for him, “America’s Mayor,” has become established in futile time frame. On September 11, 2001, Rudy Giuliani, Mayor of New York, stands knee-deep in the rubble of the Twin Towers. He keeps his head wonderfully cool, encourages his fellow citizens and warns against revenge on Muslims, who are just as much victims of this terror. In the months after 9/11, he worked almost 24/7, visited hundreds of injured and relatives and became the symbol of New York’s resilience and tolerance. Time proclaims him Person of the Year 2001. In the years after 9/11, he led many popularity polls.

2020: the black solution with which the man has dyed his hair remnants runs out over his cheek in front of a hundred cameras. He talks incoherently, smells of booze, and unveils a plot that would have taken Trump’s election victory away. Conspiracies are one specialità della casa become. He has stated that it was not Russia but Ukraine that was heating up in the US in 2016, that covid comes from a laboratory and father and son Biden are half criminals. His ex-colleagues from the justice ministry see something different: that Rudy Giuliani nowadays himself hangs out with half and whole criminals, that he dines with people he would have imprisoned in the past. So many questions are raising his current friends and statements that well-paying consultancy firms have canceled their partnership with him. His drinking problem is now also short of money.

New Yorkers can be outspoken. Many ex-intimates of Rudy Giuliani who recently had therapeutic conversations with the monthly magazine Rolling Stone sketch a painful collapse. Almost all of them say they don’t know their Rudy again. His daughter, who campaigned for Biden, had been bitter for some time: she saw her father become the ‘personal bulldog’ of a petty figure he despised as mayor, DJ Trump.

Some say Rudy Giuliani went wrong during the expensive years with his third wife, when an extra business class ticket always had to be bought for “Baby Louis,” aka her Louis Vutton bag. Some see the turnaround in 2008: “America’s mayor” seemed to have good chances of becoming America’s president. Florida’s governor had promised him his support, but withdrew it at the end. Giuliani was hurt. Also hurtful was Joe Biden, who accused him of living too much on his 9/11 fame: “Every sentence by Rudy Giuliani contains a subject, a person form and the word 9/11.”

People who know Rudy Giuliani a little know that he takes things personally, that it is no coincidence that he targeted Biden as Trump’s legal counsel. Rudy has a big ego and a small heart, they say: in the end he remains that Italian street fighter from Brooklyn in 1955, who was embarrassed that his father was in jail for a robbery. The US presidency had been the ultimate settlement with this past.

Unfortunately: it slipped from him. In the years that followed, the pool of attention and applause also disappeared. He was on his way back to the top. Only a month before the 2016 election, he jumped on Donald Trump’s car. Steve Bannon thinks that without the then popular Giuliani, Trump would never have won. The people who once cared Giuliani think it has become his downfall. Anyone who wants to use Trump for something will sooner or later find out that he is being used himself. Only one can be the ultimate charlatan.


In the rebellious Ethiopian region of Tigray, things went from bad to worse this week. Two weeks ago, Op het Tweede Sight was about Ethiopian Prime Minister Abiy Ahmed, who opened the doors of prisons full of political detainees in 2018, declared freedom of the press and made peace with Eritrea. In 2019 he won the Nobel Peace Prize, in 2020 his country is on the brink of civil war.

Armenia began this week with the forced withdrawal of troops from Nagorno Karabakh. After a six-week war, under Russian auspices, Get entered into a peace agreement with Azerbaijan, requiring it to relinquish large tracts of territory that it occupied for nearly 30 years. In On the Second Sight, it was explained with what money the Azerbaijani dictator Ilham Aliyev purchased the weapons with which he won ‘the autumn war’. Armenian Prime Minister Nikol Pasjinian was also already on the sofa.