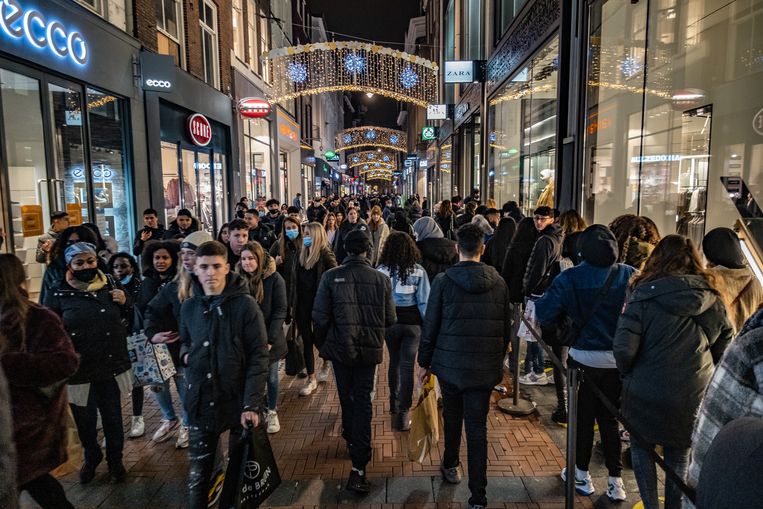 In the shopping streets of Eindhoven and Dordrecht, the shutters also went down earlier than normal on Saturday because keeping a distance of a meter and a half was impossible in the melee of customers.

‘What worries me most is that large groups of people cannot suppress their urge to bargain at this time,’ said Rianne Donders, mayor of Roermond, which is well visited thanks to the Designer Outlet, in a statement on Sunday. ‘You can therefore wonder whether the government should not have allowed Black Friday only online.’

The 25 mayors in the Security Council had indeed asked the cabinet to ban the Black Friday that blown over from America, where shops stunt with discounts for days on end, this year. However, the cabinet did not want that, Rotterdam mayor Ahmed Aboutaleb said on Sunday in the TV program Buitenhof. ‘The 25 mayors have said: do something about it. But the cabinet has decided not to. If you see that certain things could mobilize many people, then it is obvious to say: maybe not so sensible. ‘

The cabinet left the decision whether or not to intervene to the mayors, which required ‘top psychology’, Aboutaleb stated. ‘Am I going to close everything off at the front, or am I going to give it a try, see how that works, and then intervene again?’

However, the cabinet itself denied on Sunday evening through a spokesman that it had received a request from the 25 mayors to ban Black Friday. Moreover, such a ban would have been legally difficult, the spokesman informed the ANP.

The Rotterdam police tried to reduce the bustle on the Lijnbaan and in the Koopgoot, where, according to Aboutaleb, it was ‘chaotic and dramatically busy’, first on Friday with traffic measures. When this didn’t help, closing the stores was the only option.

The same image could be seen from the Demer in Eindhoven to the Herestraat in Groningen on Friday and Saturday. ‘I have just issued an emergency order’, tweeted the Dordrecht mayor Wouter Kolff on Saturday. ‘It is much too busy in the center of Dordrecht. Don’t go there anymore! ‘ “We saw in no way that people still adhered to corona rules,” said the mayor of Eindhoven, John Jorritsma, to the NOS. The mayors of Amsterdam, The Hague and Apeldoorn urged people to stop coming to the city center, while the mayor of Maastricht announced ‘code red’ on Sunday because of the busy city center.

Despite the pandemic, consumers themselves executed nearly 18.5 million transactions on Black Friday, for a total of 550 million euros in bargains. This is only 13 percent less in terms of turnover and number of transactions than last year, according to figures from the Dutch Payments Association. The number of online purchases increased significantly. On Black Friday itself, EUR 134 million was purchased through more than 1.8 million iDEAL transactions, last year it involved 1.3 million transactions for a total amount of EUR 106 million.

The police also had to take action against illegal parties several times last weekend. In Katwoude, the police put an end to a party with 92 people in a room in a Van der Valk Hotel. The partygoers can face a fine, according to the police. The same applies to the seventy young people who attended an illegal party in a business building in Maasdijk, and for the thirteen people present at a party in Arnhem’s city center, who were bumped into the lamp. In The Hague, the police had to pull out all the stops on Friday to break up a party in which fifty people were packed together in an 80 square meter house. Some of it turned against the agents. A 21-year-old woman was arrested for allegedly assaulting one of the officers.