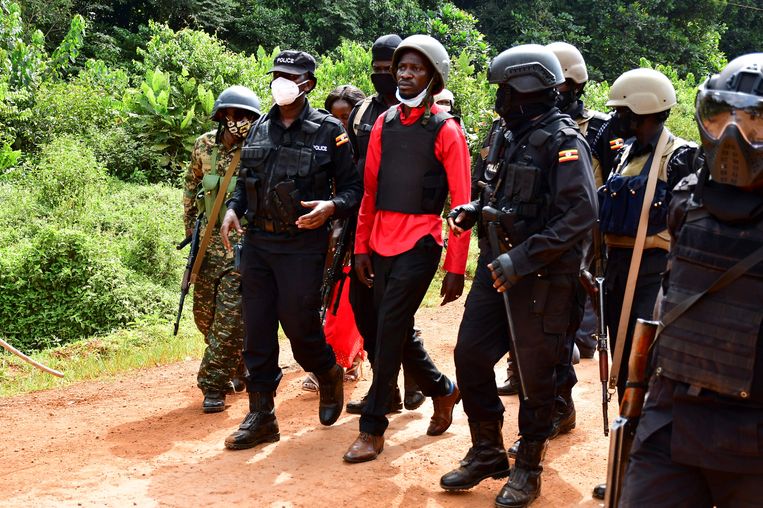 Wine was arrested along with his campaign team at an election rally in the central Kalagala region. His employees let that know via Twitter. Wine wants to compete in the January 14 elections against current president Yoweri Museveni (76), who has been in power since 1986. According to police, Wine and his associates have been guilty of inciting violence and violating corona rules.

It is the third time in a short while that Wine has been pinned. On the day the election campaign formally started, he was briefly in jail and a month ago he was detained for several days. Even then, according to the police, he would have violated the corona rules applicable in Uganda. After all, they prescribe that politicians are not allowed to mobilize large groups. The only exception to that law applies to President Museveni himself, who is allowed to organize large gatherings.

News of that arrest in November soon reached the capital Kampala, where immediate unrest broke out. Soldiers, police officers and men in civilian clothes subsequently bombarded demonstrators with tear gas and bullets in numerous places in the city. In the end, dozens of people were killed by the police.

The fierce response to Wine and his supporters shows the determination with which President Museveni, a 76-year-old former guerrilla fighter, wants to continue his rule in Uganda. Museveni’s challenger Wine (whose birth name is Robert Kyagulanyi) is also very popular among the youth because of his age (38) and his background as a singer, and there is a lot of youth in Uganda: more than three-quarters of the inhabitants are under 30. with their call for change, Museveni is only tightening the reins with the help of his great safety device.

According to United Nations human rights reporters, President Museveni is trying to violently suppress the opposition in the run-up to the elections. Activists, journalists and political opponents are also constantly being arrested or attacked.