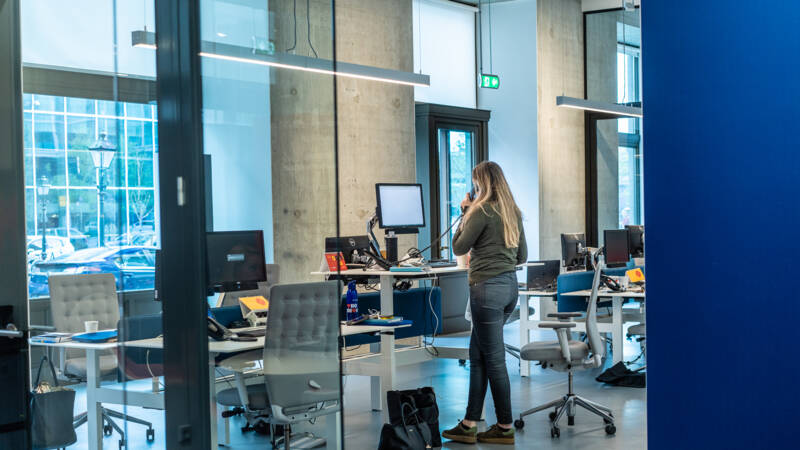 Many large companies plan to make do with less office space after the corona crisis. This is evident from a tour of News hour along 25 of the largest employers in the Netherlands. More than half of the companies expect to need less office space because their employees will work more from home. Other employers are still investigating the consequences of structural teleworking for office space.

Before corona, employees of the companies surveyed came to the office for an average of four or five days. After the pandemic, this is expected to be about two to three days. The rest of the week employees work at home or at a customer, for example.

This has consequences for the office space. Consultancy company Accenture expects to use at least twenty to 30 percent less square meters. The Capgemini Group is thinking of a reduction of 50 percent, insurer AEGON Netherlands of a contraction of 30 to 40 percent and consultancy Arcadis of 30 percent. Essent and PostNL expect to hand in 15 percent and 10 to 20 percent of office space respectively.

Cutting office space was one of the first companies at Triodos Bank. Until now, employees of the bank worked divided between a building in Driebergen and two offices in Zeist. From now on, only the new, sustainable office on the De Reehorst estate in Driebergen will be used, says Pauline Bieringa, director of Triodos Netherlands. “We do it mainly because we don’t all want to work in the office anymore. A survey among employees showed that we don’t need more than this building.”

Triodos expects that in the future employees will mainly come to the office to meet colleagues and customers. “Concentrated work, such as reading a report or writing a credit proposal, is more pleasant to do at home,” says Bieringa.

CEO Jeroen Lokerse of real estate consultancy Cushman & Wakefield can well imagine that companies are thinking about scrapping square meters, now that employees have become used to working from home. “After staff, housing is perhaps the most important thing you can save on. A workplace such as we have at the Zuidas costs about fifty to one hundred euros per day per employee.”

Management boards should not take hasty decisions, Lokerse warns. “In the long term, you have to think carefully about how you can make your organizations as successful as possible. Then the question is what the role of the office is. The office supports the realization of ambitions.” Lokerse does not expect an enormous vacancy due to the plans of the major employers. “The vacancy rate on the Dutch office market is the lowest in the past twenty years. In prime locations, places where talent wants to be, there is almost nothing to be found.”

Organizational psychologist Kilian Wawoe from the VU University has been researching working after corona since March last year. He also fears that companies will be leaving the office too soon. “First think carefully about the role of the office. What do you want to achieve there? Do not ask your employees: how often do you want to go to the office? Then you will get that one person only sits at home and the other only in the office. “

“Ask the question: how can you make the collective function better?” Says Wawoe. “That is not a quantity question, but a quality question.” According to the organizational psychologist, many younger employees in particular yearn for the office again.

Triodos employs a thousand people in the Netherlands, while the new building has room for only 550. According to director Bieringa, there is no hasty decision. “The concept and furnishing of this building has been thought through for years. Corona was a test case for us and has at most accelerated this decision.”

Nieuwsuur approached 38 of the largest companies in the Netherlands with a list of seven questions. We asked the companies how many days a week the employees came to the office for corona and what they expect that image will be after the crisis. We also asked in detail about the number of square meters of office space, whether this was increasing or decreasing and what the reasons are for this.

You can read more information about the expectations of companies here.