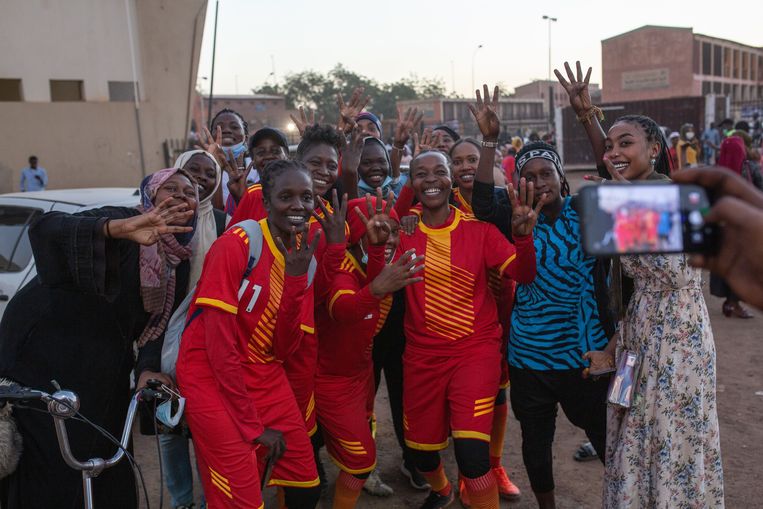 They don’t listen to names like Lieke Martens, Vivianne Miedema or Sherida Spitse, and they don’t play, like the Orange Lionesses, at Barcelona, ​​Arsenal or Ajax. But their performance is all the better: in an almost empty stadium in Khartoum, 22 Sudanese women stand up for their right to kick a ball together at all.

‘For decades a women’s football league in Sudan was unthinkable, as a woman your only role was to get married and have children,’ says Azhar Sholgami (24) beaming in the National Stadium, just before the kick-off of the women’s football season. The fact that behind the throbbing name of the National Stadium hides a desolate concrete container, with seats on the main grandstand whose upholstery has frayed a long time ago, Sholgami cannot hurt. The small defender, in a loose-fitting red outfit, is motivated to participate in the warm-up despite the sweltering heat. ‘We are going to win 3-1’, she predicts, but more important than the result is the signal emitted by the women’s competition. “It’s about realizing that women in Sudan deserve the freedom to develop,” she says, tying her shoelaces once more.

For a generation, very different rules applied in Sudan. Rules, which especially affected women. Islamic male sharpeners prescribed women how they should behave. For example, it was forbidden for women to wear trousers, but a headscarf was mandatory. The notorious vice squad enforced the laws. Women who broke the rules risked being jailed or whipped.

The situation has improved since the fall of Omar al-Bashir, the president who was dethroned by the military in April 2019 after angry civilians rebelled against Bashir’s repressive regime. Anti-women laws have been dropped by the part civil, part military transitional administration that now rules. Female circumcision is also officially no longer allowed in Sudan. To top it all off, an official women’s soccer competition was created.

And so, from the one air-conditioned sky box in the National Stadium, 40-year-old Mervat Hussein Elsadig is now looking happily at the gathering players on the field. “They are the new Sudan,” says Elsadig, the driving force behind the creation of the women’s league and the first woman on the board of the Sudanese Football Association. “We have been strongly opposed, there are still plenty of people who say: women playing football are going against Sudanese customs,” said Elsadig, who faced street protests organized by conservative Muslim leaders. But the football players were not deterred. Elsadig: “Now is our time.”

It is time for the kick-off of today’s game. The eleven players of the club Al Difaa, in red, first listen with hand to heart to the national anthem of Sudan, side by side with the rivals of Al Tahadi in sky blue. The referee and line umpires are women, as are the caretakers who are on hand if someone gets injured. The players do not wear headscarves, but almost all of them cover their legs with leggings. They don’t do that so much because of the artificial turf that can hurt with a firm slide, explains Samah Mustafa, a 28-year-old reserve left winger from Al Tahadi. “It’s our culture, in Sudan we also cover our legs when we go for a run or cycle, it has to do with looking respectable.”

Although there are no more than a hundred spectators, the Sudanese press is fully present in the stadium. Women playing football clearly have news value. The media attention helps to increase the acceptance of women’s rights, the pioneering players hope.

After kick-off, it soon becomes clear how the power relationships are on the field. The players of Al Tahadi put some pressure, but Al Difaa turned out to be a well-thought-out counter team. It becomes 4-0. Disappointed, the women of Al Tahadi leave the field, but congratulate their opponents on the victory. The match itself was also an example of sportsmanship, without joking and woe to the referee.

Trainer with a mustache

A striking appearance on the sidelines is Al Difaa’s coach, because this trainer has a mustache. As one of the few men, Abdul Ibrahim (49) just figured in a scene that can be called symbolic of the step-by-step cultural change in Sudan: when Ibrahim expressed his displeasure about an offside flag that went up very late, he was called by a woman, the fourth official, summoned to sit in the dug-out again.

Ibrahim loves this male-female relationship on the field. ‘It is good for all women in Sudan that the football players claim their place. Women’s football helps to make Sudan a more open country, ‘he says. Ibrahim previously coached a men’s team, but when the women’s competition was launched, he saw a clean task for himself. “I want to transfer my knowledge, so that the players hopefully reach a higher level.”

Ibrahim does not care about negative reactions from acquaintances, who sometimes ask why he should coach a bunch of women if necessary. ‘On the contrary, such reactions show that there is still a taboo to be broken’, he concludes, after which he and his success team take a seat in the ramshackle players’ bus, next to the National Stadium. In the bus, the football players of Al Difaa are having a party. On to the next victory in Sudan.