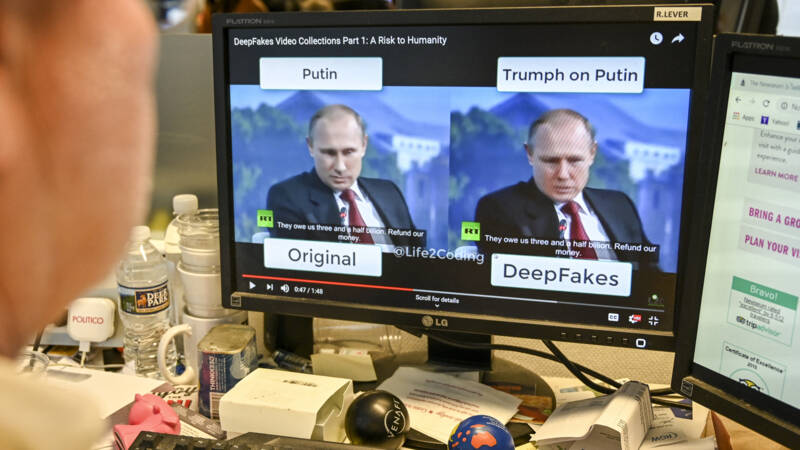 Experts have long warned against the dangers of deepfake technology: films manipulated using smart algorithms. But according to tech expert Jarno Duursma, it also offers many possibilities. Especially for business. “It makes us all more creative.”

Intelligent software creates and manipulates existing products, audio, photos and text on an increasingly large scale. For some this is a creative development, for others it is an unstoppable danger. “The dividing line between real and fake is getting so thin, I think the genie is out of the bottle”, says Duursma. “That applies to the dark side of the technology, but also to the creative side.”

Last week Epic Games released the MetaHuman tool. That is a generator that produces very realistic animated ‘people’. News uur journalist Rudy Bouma has been following the world of deepfakes for some time now and he believes the tool is “revolutionary”. Not only because of the high quality of the ‘fake people’, but also because the program will be free. “Anyone will soon be able to do this at home. Some are already calling it the democratization of creativity.”

There are more and more tools on the market that use deepfake technology. The general public mainly knows deepfakes as videos in which one face is swapped for another. Sometimes so realistic that the new image can hardly be distinguished from the authentic image.

But deepfakes continue now. The best-known example is the website thispersondoesnotexist.com“, Duursma explains. The website shows pictures of people who do not really exist, but are based on pictures of real people. “You can of course apply that to anything. Do you want a new logo or photo for your website? This can be done within a few years at the touch of a button.”

The tool Dall-E, which the company OpenAI from Elon Musk presented in January, brings this possibility a lot closer: the user types in which photo he wants and the software creates a large number of fake images that exactly match the description.

A chair in the shape of an avocado? The software generates dozens of images. Duursma: “I expect this to become part of a Microsoft software package within a few years. They hold the exclusive license.”

Earlier came OpenAI already with a tool that generates ideas for startups. Duursma: “Some ideas don’t work at all in the real world, such as chewing gum with the taste of garlic. But suppose you work at Unilever and are looking for new ideas: you refresh the page for an hour and you get forty ideas that are reasonable. and ten are very good. Then I want to see a hundred ideas. “

According to Duursma, the technology makes everyone more creative. “With the help of these tools, anyone can make things for which you did not have the skills before.”

News houreconomist Mathijs Bouman also sees a drawback. “Now we can still distinguish ourselves with music or drawing talent, but will we not soon lose our creativity and can everyone with a good chat then sell creative products?”

Deepfake offers even more possibilities. Are you stuck in a marketing text? Then the technology offers a new angle. Do you want to inform your employees about a new development? Create your own avatar, type your text and 15 minutes later you have a video of yourself as a presenter.

And don’t feel like putting effort into an email? “You’ll be typing a few later bullet points and then artificial intelligence creates a fully written e-mail with a friendly tone, “says Duursma.

Theo Gevers, professor computer vision at the University of Amsterdam, the interest in deepfake technology is also growing among companies. For a large bank he is researching how the technology can be used in online conversations with customers. “If you have a preference for a woman with a high voice, for example, you can have a conversation with that later, while there is actually a man with a low voice behind it.”

Yet there remains a downside to this ‘democratization of creativity’. “Suppose a fake video of a CEO shows up that his liquid assets – money that can be spent in the short term, such as cash in the till or invested money – are not that sufficient at all, while his company is about to go public. A reputation is built up slowly, but quickly destroyed “, Duursma explains.

And cyber criminals can easily impersonate someone else in scamming practices. Bouman therefore wonders what regulations will be introduced. “Shouldn’t there be some kind of warning sign, a bell at the beginning of: this is fake?” Duursma: “This technique will also be a challenge for investigation software.”