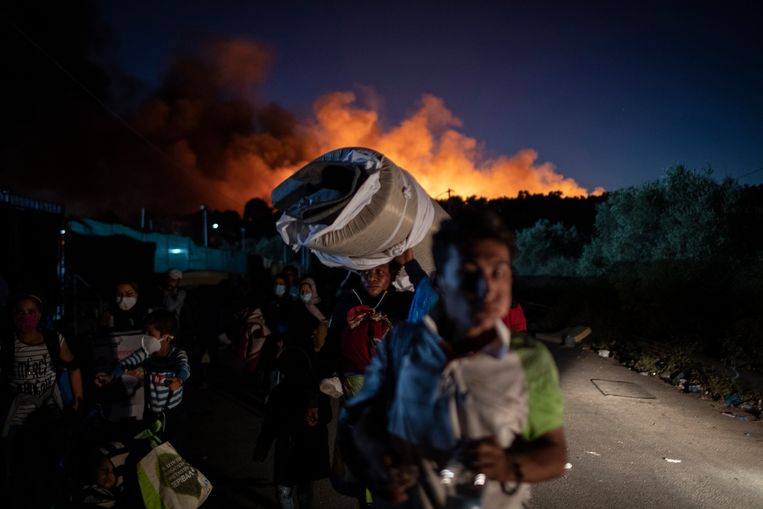 The woman, who is due to give birth to her fourth child next week, underwent hours of interrogation in hospital by the Greek police, her lawyer tells The Guardian. She had recently been granted asylum status, but was not allowed on the plane to Germany at the last minute because of her advanced pregnancy. Germany flew three hundred people from Lesvos this week and has taken in 2,000 people from the island since April last year.

After the woman, who has been on Lesvos since 2019, heard that she was not allowed to go and, according to witnesses, had not fully understood that she would still be able to go after her delivery, she set fire to her tent while she was inside out of desperation.

The fire was quickly put out by other camp residents and the authorities. The woman sustained burns to her hands, feet and head, but has since been released from hospital. Because she is a suspect in criminal proceedings, she is now not allowed to leave Greece for the time being.

The woman lives in the temporary camp that was set up in haste after the burning of Camp Moria in September. The primitive tent camp, set up on a former military training area by the sea, has hardly any sanitary facilities and cannot withstand the winter weather of recent times.

Initially, the new Moria provided shelter for about 12,000 people. Due to relocations to the Greek mainland and other European countries, that number has now fallen to about 6,500 residents, many of whom are still children. In addition, about a thousand people live in the neighboring refugee camp Kara Tepe.

The situation in the Greek camps has recently become increasingly tense, aid organizations warn, partly due to the strict lockdown measures. On Tuesday, a Kurdish boy of seven years old died in a fire in another refugee camp, Thiva, north of Athens. The fire in the container house probably broke out during cooking, as also happens regularly in the tent camp on Lesvos.

Greece’s right-wing government hopes to reduce the number of refugee camps in the near future. Minister of Migration Notis Mitarachi, for example, promised on Thursday in a letter to the mayor of Mytilini, the capital of Lesbos, that the camps on the island will close this year. Greece wants to build one new ‘closed’ camp, which should be finished after the summer and where a maximum of 3,000 asylum seekers can stay.