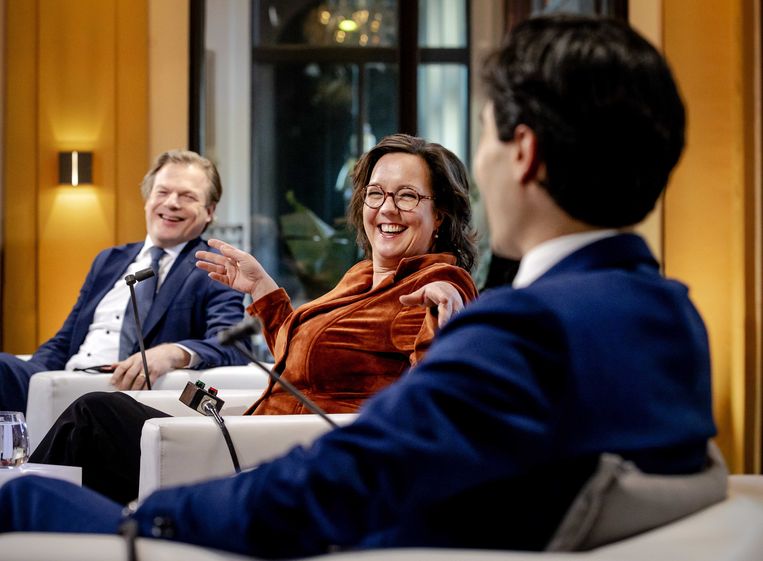 The broadcaster that promises a ‘cheerful right’ sound had also intended to create a cheerful debate, with playful introductions from the participants – CDA member Pieter Omtzigt was once again called a pit bull and the viewer now knows that Tamara van Ark saves cookie cans – and a fragment of the American comedian Jerry Seinfeld, who joked that the numbers two are actually the first losers.

Despite this, the debate at times became extremely resentful. This was partly due to the same set-up of the program, with six parties (VVD, PVV, CDA, D66, PvdA and SP) that had to fight for attention in a free for all. There was often no time for much more than a few sharp one-liners. “Wait a minute, this is not a game show,” Omtzigt fired after WNL presenter Rick Nieman had warned him not to stray too far.

The CDA MP had already had a problem with Renske Leijten, the SP MP who is his loyal ally in the benefits affair, but who, according to his taste, interrupted Omtzigt too often about the problems at the police. ‘I think it is quite difficult, Renske, to let me finish. (…) I really don’t like the way in which the discussions are held here. ‘

The politicians were able to place their own accents with their own statements, one for each party. Fleur Agema (PVV) kicked off the cutbacks of IC beds and the closure of hospitals, as a result of which, according to her, the Netherlands was insufficiently prepared for the corona crisis. Van Ark, who is responsible for medical care in the cabinet, partly agreed: we may have gone too far in the efficiency.

The VVD minister more often joined in with the criticism, without immediately accepting all the blame. Just like her party leader Mark Rutte, Van Ark tried to stand above the parties on Sunday, particularly by emphasizing the similarities. ‘I think we can find each other to continue to invest in the police,’ said Van Ark, for example. Or: “I think we can find each other for the sake of housing.”

A proposition about the housing shortage was made by PvdA MP Henk Nijboer, who conducted the debate because PvdA number two Khadija Arib is the chairman of the House of Representatives. His battle plan exploded in his face. Nijboer actually wanted to talk about the introduction of a ‘Prins Bernhard tax’ to make pawnbrokers pay more on their rental income.

Soon, however, it was about the landlord levy introduced by VVD and PvdA, the tax paid by housing corporations – which means they have less money to build houses. Nijboer’s defense that the levy was intended to be temporary was not convincing. In these elections too, the PvdA is haunted by the ghost of Rutte II.

D66-running mate Rob Jetten only targeted one party – the VVD – and one man: the prime minister. “Why is Mark Rutte not man enough” to have his climate plans calculated by the Netherlands Environmental Assessment Agency, “he objected to Van Ark. He called the wanting to return refugees who come to the Netherlands on their own initiative. And the Rutte doctrine, a term that has since started to float freely, was not missing from Jettens’ argument. Omtzigt joined in with passion: ‘Can I know from the VVD whether we are really saying goodbye to the Rutte doctrine?’ “There isn’t one,” said Van Ark, just after the buzzer before the end of the debate.

For example, the prime minister was there, without traveling to the WNL studio.