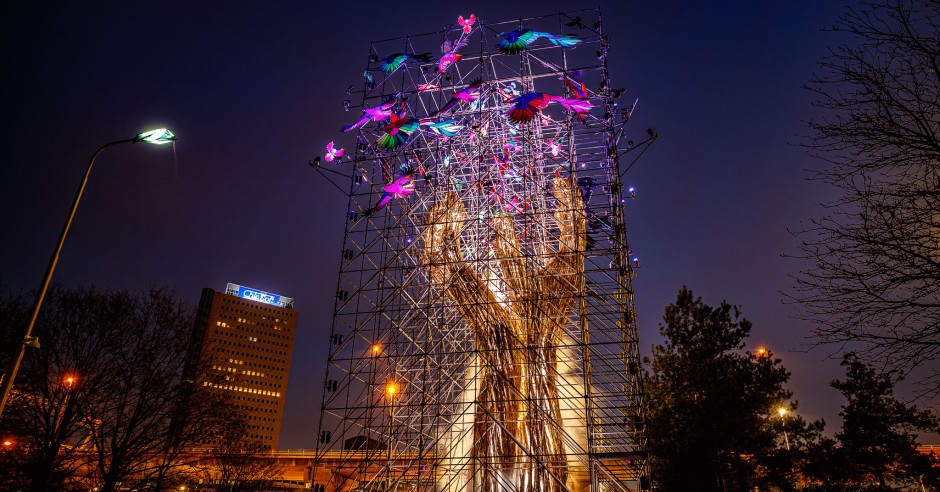 By RobZ on April 02, 2021 – 1:10 PM
Normally, the festival season in our country would be opened this weekend with Paaspop. A moment that not only festival enthusiasts rejoice in every year, but also many makers behind the scenes prepare for months on end. The makers and creatives of the Dutch festival industry, which has come to a complete standstill due to the current pandemic, have together built a temporary beacon of hope on an area to be (re) developed in Amsterdam Sloterdijk, District West. The Tree of Hope was unveiled last night with a Spoken Word by Glenn de Randamie aka Typhoon. Tree of Hope can be seen until 1 July along Basisweg in Amsterdam.

Tree of Hope is a thirty meter high symbol of hope created by the makers of the Dutch festival industry. Two giant hands join as a trunk and the crown consists of a flock of birds of paradise released to take flight. Together they form the Tree of Hope. An optimistic work of art, a heart under the belt of and for the mostly invisible Dutch festival builders, the makers of the magic that we must all miss at the moment. Tree of Hope is an expression of hope and will remain until the next day.

Tree of Hope has been planted by the trade association Association of Event Makers (VVEM) and District West. VVEM is the connecting ambassador of Tree of Hope and represents the entire Dutch event and festival industry. The temporary artwork was created by makers from that industry. For example, Dennis van Harten (chief designer of Q-dance) and Marc Adema (chief designer of Sensation) designed the Tree of Hope and, together with Machine (responsible for the identity of Mysteryland, Welcome to the Future), they created the flock of birds that together form the crown of the tree. The tree is located on the District West site in Sloterdijk and gives color to a raw, industrial area that is being renovated into a creative, urban office location.