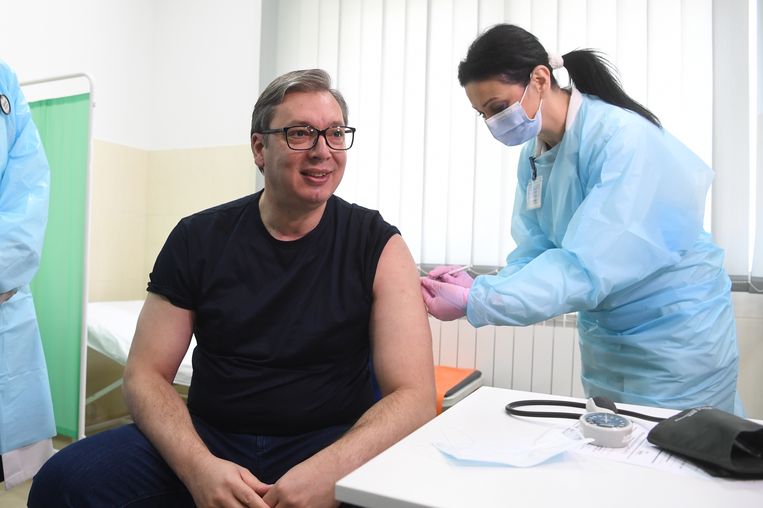 The vaccination of the 51-year-old prime minister was broadcast live. “As you can see, I am still alive, I am still moving, I want to tell everyone that it is good to get a vaccine,” he told the media present. On his Instagram account, Vucic posted a photo in which he got an injection and thanked ‘our Chinese brothers’. It must convince its compatriots to also take the vaccine: research shows that half of the Serbs are not convinced about the vaccinations against corona.

Until now, the Serbian vaccination program has mainly been a success story. For many countries, getting enough corona vaccines alone is a big hurdle in the vaccination race, but Serbia had fewer problems with that. Populist President Vucic strengthened ties with his colleagues in Moscow and Beijing to get doses of Sputnik V, SinoVac and SinoPharm in addition to the ‘Western’ vaccines from Pfizer and AstraZeneca. The government made deals for a total of 15 million vaccines – enough to give each of the 7 million Serbs two shots.

Vaccinations have been going very well since January. Already 20 percent of the population, 1.5 million people, has been pricked at least once. Now Serbia seems to be approaching the ceiling. The number of people who show up every day for a vaccine has been halved (from 24 thousand in January to 12 thousand at the beginning of April). Only a quarter of the people who are eligible for the vaccine actually visit the vaccination centers.

It prompted the Serbian government to open up vaccinations to foreigners as well. Thousands of these have already traveled to Serbia for an injection, for example from neighboring Bosnia, where no significant vaccination program has yet got off the ground. On Tuesday, thousands of Bosniaks demonstrated in the capital Sarajevo against the government’s lack of vaccination policy. Earlier, Serbian President Vucic had already visited neighboring countries of North Macedonia, Montenegro and Bosnia-Herzegovina to deliver vaccines – and sent some extra to the Serbian part of Bosnia, Republika Srpska. Many countries in the Western Balkans are looking to the West for help with vaccinations, but this is largely lacking.

15 million vaccines or not, half of the Serbs say they are definitely not or probably not vaccinated, according to research by the Balkans think tank in Europe Policy Advisory Group (BiEPAG). The think tank report links the mistrust in particular to conspiracy theories and disinformation. The figures are comparable with other countries in the western Balkans, but also, for example, with France, where there is also a strong anti-vaccination movement.

Particularly in the countryside, distrust is great in Serbia. President Vucic traveled to the mining village of Roedna Glava in the east of the country for his jab. For his second shot, in three weeks, he will probably go to a vaccination center somewhere south. Ultimately, the goal is to vaccinate 65 to 80 percent of the Serbian population against the corona virus.

Although the pace of vaccination is slowing, Serbia still has one of the most successful vaccination campaigns on the continent. Together with the United Kingdom and Hungary, they leave many other European countries far behind. In the UK, more than half of the adult population has already had an injection, in Hungary about a quarter. This week, Prime Ministers Boris Johnson and Viktor Orbán announced easing.

The common denominator between the three – otherwise very different – countries is an idiosyncratic vaccination policy. The EU vaccination program is slow to get going. EU Commission President Ursula von der Leyen has already compared the UK to a ‘speedboat’ and the EU to a ‘tanker’. The Hungarians have decided to vaccinate with Russian and Chinese vaccines without the approval of the European Medicines Agency. Slovak President Igor Matovic also pulled in the Russian vaccine, but got into a fight with his coalition partners and had to step down as prime minister.

Serbia did not need that approval at all. It is the first country in Europe to approve and use vaccines from both China and Russia. The country already had large doses of SinoPharm in January. President Vucic said he would be vaccinated with it. He has now kept that promise. Perhaps also to put an end to angry voices who said he had been secretly vaccinated with a different vaccine or, more trivially, that he was afraid of needles.

In any case, Vucic is not afraid of one thing: doing business with authoritarian states such as Russia and China, which want to take a geopolitical blow with their vaccines. This is not limited to vaccines – China, for example, also invested in mining areas in eastern Serbia. Previously they also supplied protective equipment and medical equipment. In a number of places in the country, billboards for the pro-government magazine have already risen Informer, with a picture of Chinese leader Xi Jinping and the text ‘Thank you Brother Xi’.