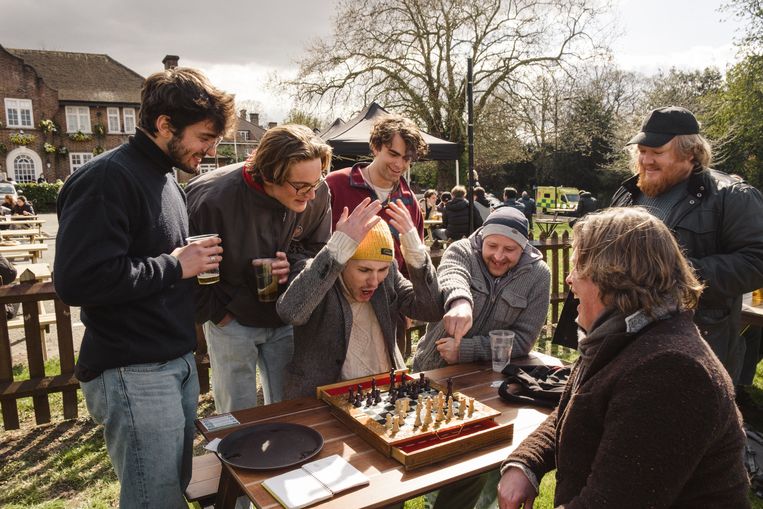 ‘Check mate!’ It’s 2pm when Alex Lanks and Michael Martin-Jones have finished their sixth game of chess in the garden of The Fox on the Hill, a pub in Denmark Hill, South London. Each party is accompanied by one pint or ale or cider.

“I took time off to celebrate Freedom Day,” says Michael (36), who works in marketing. ‘It was time for this reopening. Humanity must return. ‘ His old mate did not have to take a day off, because due to the lockdowns he lost his job as a language teacher in Mallorca.

The two friends are joined by a few hundred other drinkers in the beer garden of the 18th-century pub. From nine in the morning, the first guests had arrived to celebrate the pub’s rebirth. People hug each other and hands are shaken again, just like before.

Vans ring their horns, leading to cheers from the dozens of picnic tables. The flight attendant sometimes has to intervene if the rule of six is jeopardized, for example, when too many people get involved in the chess games.

Downhill, only the pictures of doctors and nurses on the walls of King’s College Hospital remind us of the corona crisis, a gesture with which the hospital wishes to thank its staff for their tremendous commitment. The hospital is still busy, but that only concerns overdue care.

Statistics show that an average of one covid patient is admitted per day here. As in other London boroughs, hardly more people die from Covid in Southwark. The number of infections is one or two per day

In fact, a study by University College London found that half of the English now live in areas where corona has all but disappeared. It helps that more than 40 million Britons have already been vaccinated. Combined with the number of people who have antibodies, this means that there is some kind of group immunity.

So there was no reason for Boris Johnson to postpone the second phase of relaxation. The prime minister would have liked to go to the pub himself, but that was considered inappropriate after the death of Prince Philip.

The national mourning cannot dampen a sense of liberation, nor the light snowfall in the morning that proved that April is, in the words of TS Eliot, the cruelest month. Immediately after midnight, the first English went to the pub, to this cornerstone of English society, to learn the Coronadorst.

Some beauticians have made nighttime visits to neglected clients. Before dawn on Mad Monday, lines formed at sports and clothing stores, rows that sometimes ended in skirmishes. It was also busy at the 25,000 hairdressing salons.

Even Johnson joined a barber, which is a memorable moment anyway.

It is a big step for the dead-end catering industry, at least for the pubs and restaurants that have access to an outside. Six out of ten pubs, especially in the inner cities, have to wait another five weeks before serving indoors.

Far too long, according to critics of the cautious government policy. For the pubs that have now opened, even playing even is the highest achievable. Part of the money they earn is spent on hiring security guards and installing event toilets.

The country’s best-known bar owner, lockdown skeptic Wetherspoon owner Tim Martin, has lashed out at authorities. Some municipalities have demanded that visitors wear masks and are difficult to issue permits for tents.

“Chastelans have to overcome many hurdles to live up to the folly,” Martin wrote on the site of his chain, which includes The Fox on the Hill. He points out that, after the temporary thaw, there were no virus outbreaks in the catering industry last summer.

The pub boss has also joined in the latest corona discussion: covid passports, virtual proofs that visitors have been vaccinated, tested negative, or have antibodies. According to him, it is not only unworkable, but his employees become ‘a plaything in a discussion about civil rights’.

The government wants to introduce them anyway and is talking about a ‘Freedom Pass’, a term that sounds a bit more positive. Opinion polls have shown that six out of ten Britons do not object in principle.

It’s a tricky issue for Johnson. In 2004, the Conservative was at the forefront of Tony Blair’s New Labor plans to introduce ID cards, the kind of passes his hero Winston Churchill had abolished in 1951 ‘to set the people free‘.

It is no longer a question of whether they will come, but for what purposes. For the plane? Store? Football stadium? Theater? Pub? Influential opinion leader Piers Morgan has proposed bombarding people who refuse covid identification into pariahs.

The drinking chess players Michael and Alex see nothing in ‘Freedom Passes’. “Little by little, the state is appropriating power,” says the former. ‘Our steps are being followed. You can already see it with cash payment. That will almost disappear. In more and more places you have to pay with a card or app. ‘

This also applies on this carefree spring day on the fox hill, where the waiters, the only people with mouth masks (whether or not hanging at half past six), can barely keep up with the number of orders.