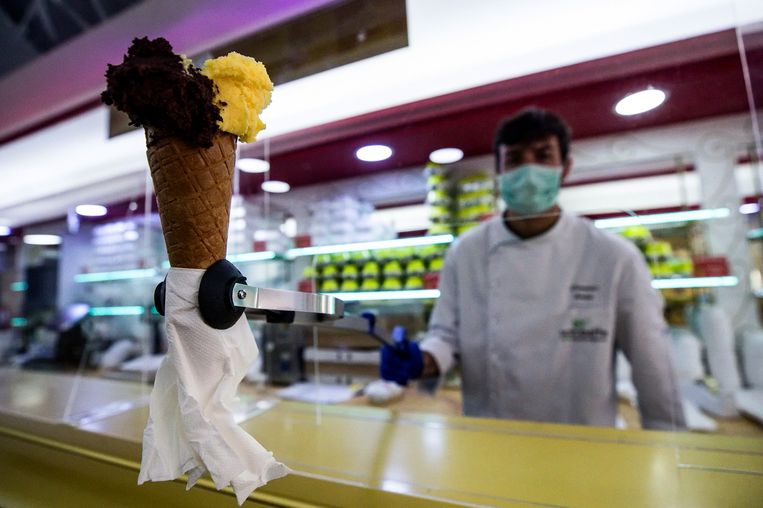 My favorite ice cream vendor shrugs apologetically, handing a cone wrapped in aluminum foil. His slightly scornful look says: I also know that this doesn’t make any sense, but that’s just the way the rules are. Or maybe that’s my interpretation, through the mouth mask I can only see his eyes.

The aluminum foil-wrapped ice cream, which I just unpack a few meters away and eat in the sun like everyone else, is an outgrowth of the Italian rule of corona. Food can now only be collected, so the foil must mark that it is not a normal ice cream, but a takeaway ice cream.

Italy had one of the toughest and most enforced lockdowns in Europe last spring. Even now, on paper, the country has been in (semi-) lockdown for weeks, but the practice is different in many places. The policy is so nuanced and controls are so scarce that the weary Italians are increasingly putting their own spin on it.

For example, mouth masks should always be on, inside and out, except for those who smoke a cigarette or knock back a takeaway espresso. Or for those who have an extremely important telephone conversation, in which not a hundredth decibels of the already considerable volume may be lost (this is not a rule, but common law in the streets of Rome).

The regional differences are so great, both in behavior and in infections, that the travel ban between the regions that has been in force since December is understandable. But there are also countless exceptions: the ban does not apply, for example, to lucky people who own a second home, or to those who are still registered at their old address but now live elsewhere.

The exception clauses and many subtle changes make the rules so incomprehensible that the media devote many words to explanations every week. As a kind of Bible interpreters, they apply the rules to a hundred and one hypothetical situations.

Consider the answer to the question whether lovers enrolled in different congregations can visit each other at Easter: “The only option is if one lives in a village of less than 5,000 inhabitants and the other within 30 kilometers of it. That may be in another region, as long as it is not the capital of a province. ‘

So much for the theory. At the same time, a few thousand Italians left for a holiday abroad at Easter, because that is no other region, a village of more than 5 thousand inhabitants or – God forbid – the capital of a province.

Italy is by no means the only country where corona theory and practice are sometimes far apart, but the imperturbability with which Italians move around their rules is almost admirable. They are not demonstratively rebellious in the Vondelpark, but rather quietly fold out the awnings of their closed terraces.

That by chance there are still a few stray high tables, that customers who have picked up something stay there and chat for a while, and then they start to eat and drink anyway – surely all that cannot help the restaurant owner?

As stiff as the Italian bureaucracy is, the real world dances smoothly around the elaborate regulations. If there is only aluminum foil on your ice cream at the time of purchase, you can throw it away ten seconds later and eat the ice cream where and with whom you want. Excellent reason to take off the mandatory face mask, of course.