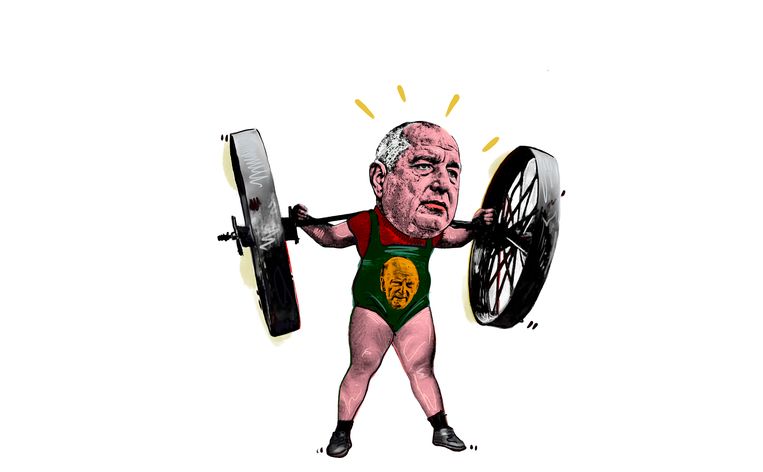 There are about ten Eastern European men whom I had already seen ‘in person’ before they became prime minister or president. For some I saw the future coming, for others less and not at all for one.

Twenty years ago, the Bulgarian ex-king Simeon II of Saxe-Coburg-Gotha participated in the elections under the vulgarised name of Simeon Sakskoburggotsky. In a sweltering week of June I followed him on campaign. Because this majesty was such a thin little man, his bodyguard, a gigantic wardrobe with shaved head, stood out even more. When I wanted to ask the ex-king in the beautiful old town of Veliko Tarnovo a question, the wardrobe gave me such a stern look that I kept away from him.

If someone had said at the time that not that ex-king but that bodyguard would become the most successful Bulgarian politician after 1989, I would have raised my eyebrows. Little did I know at the time that that shaven-headed fellow with the perfect bouncer stature had worked for the crucial ministry of the old communist state, the Interior Ministry; that after 1989 he had emerged as an entrepreneur in the growth sector, security; and that before he started guarding Simeon II, he had already made himself useful as the bodyguard of father Zhivkov, from 1956 to 1989 the first man of the People’s Republic of Bulgaria.

In retrospect, it is easy to conclude that Bojko Borisov saw his physical services for the ex-party chief and the ex-king as a kind of internship, that he learned from those men how to become a charismatic leader. Like Zhivkov and Simeon II, the bodyguard became skilled at spawning very different types of Bulgarians, old, young, pro-European, pro-Russian. ‘Everyone’s best friend’, in the words of the Bulgarian thinker Ivan Krastev.

The rest is history. Borisov first presented himself as a power figure when he was elected mayor of Sofia. He invited camera crews to speak to criminals who were arrested. He became Prime Minister in 2009, again in 2014, again in 2017, and on April 4 his party became the largest again. All the while, Bulgaria continued to struggle with poverty, dependent judges and organized crime. The country fell in the World Press Freedom Index and the Corruption Perceptions Index.

Borisov had plenty of scandals. Colleague Rutte was also recently discredited, but he was not photographed with a gun on his bedside table and stacks of 500 euro notes. In the middle of corona time, half Sofia ran against Borisov, but unfortunately, elsewhere many voters had neither the energy nor the courage to vote him out.

For years, Bulgarian voters were considered the bravest in Eastern Europe. They opted for change at every election, disappointment followed after every election. My Bulgarian friend Georgi Apostolov diagnosed with this electorate ‘the despair of gamblers in a casino’. First you try out all possible variants, then you lose heart. It was at this stage that Borisov made his debut, call it a sense of timing.

Another thing: in 1990 this beautiful country had 9 million inhabitants, 7 million are left – the population shrank and there was a brain drain. Sometimes it’s a good thing you don’t know the future. I remember students philosophizing on the streets of Sofia about a new Bulgaria a quarter of a century ago. Suppose there had been a voice from the future: “Many of you will leave Bulgaria, and that wardrobe that still guards Father Zhivkov will take office as prime minister in 2021 for the fourth time.” That had made everyone sad.