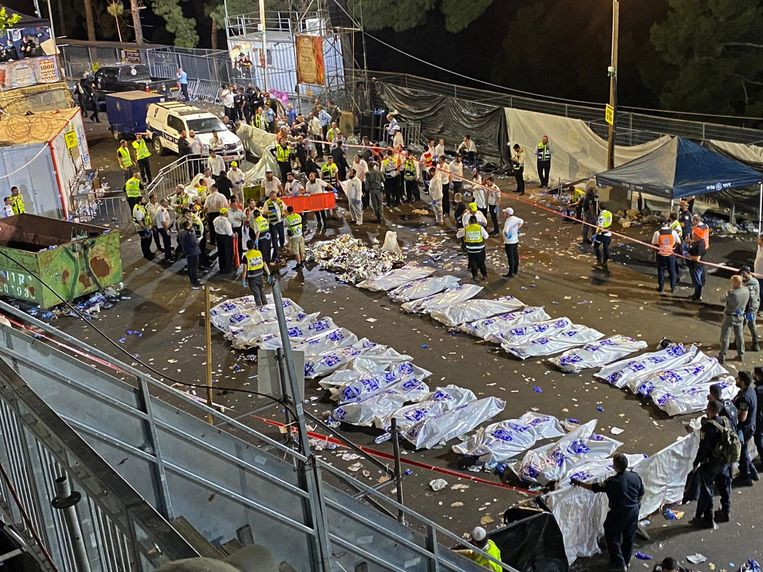 During a religious festival in Israel, 45 people died of tribulation on the night from Thursday to Friday. What kind of celebration was this and how could it go wrong?

Just before dozens of people around him were trampled and crushed in a fit of blind panic, Arik and his school friends stood at the place where they wanted to be that day: the grave of Shimon bar Jochai.

“ We were really close to the grave, when suddenly a father started yelling that his son was stuck, ” Arik told a journalist from the Israeli newspaper a few hours later. Haaretz. ‘People started shouting,’ I’m choking, I’m choking ‘. I heard a boy shout, “Daddy, I can’t breathe,” and a moment later someone threw up all over me. Someone else was choking, someone was on my leg. I screamed for him to move, but he was unconscious. ‘

Arik told his story from a hospital on Friday afternoon. Because one of the most important holidays for believers in Israel, Lag Ba’Omer, celebrated on Mount Meron in the north of Israel, ended in a real disaster on the night from Thursday to Friday. After panic broke out among the tens of thousands of visitors, at least 45 people were killed as a result of tribulation, 150 others were injured, including many children.

Lag Ba’Omer is a day on which ultra-Orthodox Jews commemorate Rabbi Shimon bar Yochai, an important scribe whose tomb grew into a true pilgrimage site after his death in the second century. On his death day, his grave often attracts more than a hundred thousand pilgrims who spend hours singing, dancing and lighting bonfires. The fact that many children are present is because boys who turned three in the months leading up to Lag Ba’Omer traditionally receive their first haircut at the rabbi’s grave.

The fact that tens of thousands of pilgrims were also present on the mountain this year is because a large part of the Israeli population has since been vaccinated, as a result of which many corona measures have been scrapped. In fact, the party on the mountain was the first mass rally since the pandemic broke out early last year. But rules did apply.

For example, in consultation with the Ministry of Health, it was agreed that the actual complex around the rabbi’s tomb could contain a maximum of ten thousand people. On Friday it turned out that the organization had interpreted the clues a little more freely. For example, several large screens had been installed around the complex, so that the rest of the audience could follow the lighting of the bonfires as closely as possible.

On Friday afternoon after the disaster, the organizers admitted to having welcomed at least 650 full coaches from all over Israel. It contained at least 30 thousand pilgrims. Later in the day, many more people flocked, resulting in final estimates ranging from 50 to 100 thousand visitors.

“It was total chaos,” one of the attendees told me Haaretz. ‘When it happened, I initially thought it was a small thing. But then I saw one stretcher after another pass by. Next came the ambulances. And then the fire brigade, the rescue workers, the police, one car after another arrived.

The panic probably started after a visitor in the male part of the complex slipped on a steel step, attacking someone else, after which a domino effect was created in the crowd. But the big question posed in virtually all Israeli media on Friday is: What happened next?

Several eyewitnesses told Israeli newspapers and television channels on Friday that the police, who were in great numbers because this was the first major event since corona, were acting completely wrong. “We tried to leave, but the police had locked everything up and wouldn’t let us go,” one of the attendees told me Haaretz. “We begged to please open the gates, but somehow the cops didn’t let anyone through, so everyone started pushing against each other and people were simply kicked to death. I didn’t understand what was happening, and then I passed out. ‘

What also didn’t help was that ambulances and police cars could barely reach the mountain on Friday morning. Reason: the access roads were almost completely blocked by local residents who wanted to help their relatives. That is why it took hours for all those present to be evacuated.

The latter will almost certainly have consequences in the coming weeks and months. On Friday afternoon, the media already reported that Mischa Lindenstraus, who for years was a kind of state ombudsman, has warned in both 2008 and 2011 about a potential disaster on Mount Meron. The tomb environment, according to his reports, needed a total overhaul because “both the access roads and the pathways are unsuitable to accommodate the hundreds of thousands of people,” he wrote. “There are no grounds on which the continuation of the current situation can be allowed.”