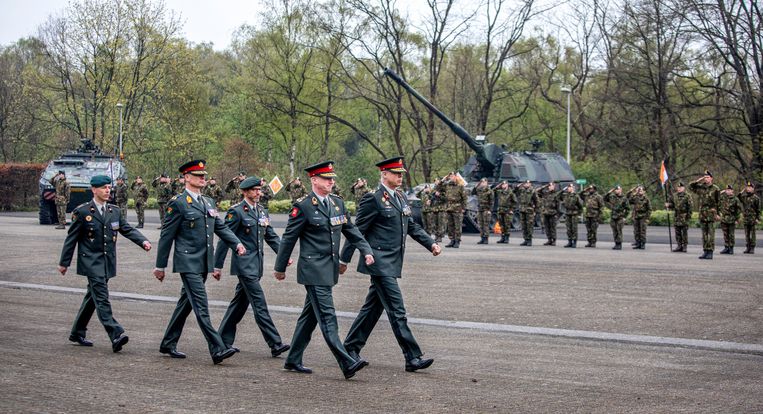 Soldiers standing in line, saluting the military, and parading across the square of the 41st Artillery Division. “Setting up a unit is something different from scrapping units due to cutbacks,” says Major Steffie Groothedde, the adjutant of the Army Commander Martin Wijnen, with a smile.

The ceremony, modest because of corona, is on the central square of the beautifully situated army camp at Oldebroek in ‘t Harde. From the dark wood interior of the Officers’ Cantine, located on top of a hill, you can look far out over the leafy shooting range of the firefighting command. In the stained glass windows of the mess are the names of fallen artillery officers and non-commissioned officers – from the army and the KNIL – who fell between 1940 and 1950. The field artillery itself was founded in 1677 within the State Army, the mobile artillery in 1793, when the French attacked the country.

But now soldiers from the three existing batteries are lined up in the courtyard and captain Niels Kalwij is solemnly handed over the direction for the new unit. “Ladies and gentlemen, remember your ears!” The first shot, which is fired with a smaller ’25 pounder ‘, resounds and the Netherlands has again gained a battery of armored howitzers – the army’s heaviest artillery – the Delta battery.

Or well, a battery minus.

Because the Delta battery does not have nine armored howitzers, like the Alpha and Bravo batteries, but six. It is a ‘bittersweet experience’, says Lieutenant General Wijnen afterwards. ‘The establishment is possible because structural money was added during this cabinet term.’ In theory, he could create a full-fledged battery like this. Enough armored howitzers, after all. In 2018, the Ministry of Defense removed more than twenty-five, which had been put up for sale as a result of earlier cutbacks, ‘from the sale’. The fact that it only became six has to do with money.

‘Growth is not the same as reverse shrinkage,’ says Wijnen. ‘You have done away with so much. Those armored howitzers were in the shed for sale, but before you get them back you first have to make them deployable, train people, that takes time. And keeping a unit running costs structurally money: practice, ammunition, support. Hence the battery minus. ‘

The turnaround was in 2014 – the Russian annexation of Crimea. As a result, NATO countries returned to collective defense, in addition to distant crisis management operations. And a turn had to be made in the earlier decisions about cutbacks. ‘If you don’t have to, of course you won’t sell them first, usually for next to nothing, and then come to the conclusion a year later that you want to keep them.’

The Court of Audit made exactly that conclusion last month with regard to the cutbacks on tanks, among other things. Almost half of the cuts made ten years ago had not been realized, partly because the estimate of the operating costs was too high. But also because ‘equipment to be disposed of is often retained and even expanded’. The more than 100 tanks were sold, just before the situation in the Crimea got out of hand. After that, the cooperation with Germany started in this field and now the Netherlands leases eighteen tanks from Germany.

NATO would like to see the Netherlands purchase 52 tanks again, something a subsequent cabinet may decide on. The Court calculates that those tanks could have been ‘seven to eight times cheaper’ if the old ones had not been sold, but had been upgraded.

‘It is easy for the Court of Auditors to talk’, scornfully sounds in the Officers’ canteen. Commander Wijnen says it more diplomatically. ‘If the rest of the world doesn’t cooperate, you can realize that you shouldn’t have done something. Until 2014 it was: we go light, we go expeditionary. But after what happened in Crimea, Donbas, and with the downing of MH17, we saw that the intentions changed. ‘ And then defense had to partly turn around. In contrast to the tanks, ‘fortunately’ not all armored howitzers had been sold yet.

The artillery song now resounds in the courtyard. Soldiers sing or hum it along, not an artilleryman who does not know it by heart. “How those horses run there, it’s Field Artillery!” Today only the richly decorated standard bearers are on horseback, who add ceremonial splendor and provide it with symbolic meaning.

The huge armored howitzers themselves are not as old-fashioned as they look on the outside due to their connection to modern technology – although they remain intimidating, but they are intended to be. They belong to the kind of fire support that NATO wants more. Wijnen: ‘The current type is precision ammunition, which can hit targets within ten meters at distances of 50 kilometers. New ammunition is even more precise. ‘ In the coming years, reaction time and precision must further increase with the help of a new ‘multi-mission radar’. ‘The idea of ​​old-fashioned artillery barrages from the First or Second World War is really a long way off from the 21st century reality,’ says Wijnen.

This does not apply to the military ceremonial itself. That goes back as far as possible to old traditions. Just like the artillery song, which refers to earlier times and haunts the courtyard. ‘What’s thumping on that heather? What’s in store there? What thunders between the two, That one cannot see through dust? ‘ And really, it thunders in the distance, because practice is also taking place today.