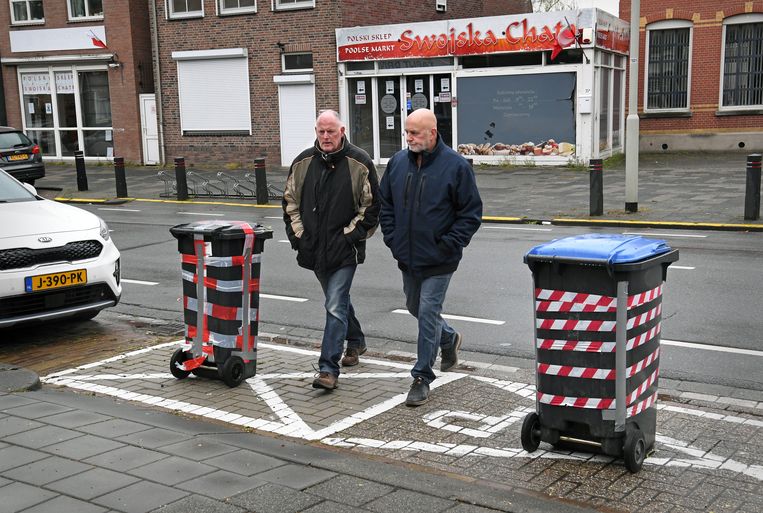 Residents of a working-class neighborhood in Roosendaal have been complaining for years about beer drinkers and wild peasers at a Polish supermarket. After a damning report from the Ombudsman Commission, the municipality promised to improve, but the conflict has only escalated further.

When the wife of Barro Wijkmans (63) pulled up the slats one autumn morning in 2014, her eyes fell on a new sign across the street: ‘Swojska Chata, Polski Sklep.’ Wijkmans, born and raised in the Roosendaal working-class district of Kalsdonk: ‘We were shocked by that, a Polish supermarket in the middle of a residential area, on a main road with few parking spaces.’

They thought the furniture store there was renovating. Wijkmans, project manager at Strukton Rail, called the municipality, but it was also surprised. The new Polish owner had not applied for a permit, neither for the renovation, nor for the cooling installation on the roof. Together with a few other residents, Wijkmans asked the municipality to take ‘enforcement action’.

It was the beginning of a conflict for years between residents and the municipality that continues to this day. You could just call it a village riot in West Brabant. But according to National Ombudsman Reinier van Zutphen, such conflicts are more common as a result of inadequate government communication. They are typical of the difficult relationship between increasingly empowered citizens and a (too) bureaucratic government.

‘The Dutch give their relationship with the government a 6 and characterize it as necessary, complicated and far away,’ Van Zutphen concluded two years ago after research. ‘The most important point for improvement for the government is’ simplification’: understandable language and simple procedures, preferably via one counter.

The local residents at the Polish supermarket give their relationship with the municipality of Roosendaal a much lower figure. ‘That is more towards a 1’, Wijkmans snarls. Because the Polski Sklep has caused great nuisance in the neighborhood: customers park their car in the driveway of houses or across the sidewalk, they drink noisy beer in the street or urinate in the flower boxes. ‘And the government does not give a damn about it,’ says Wijkmans. “Then they send another boa around noon, while it is rush hour at the end of the day.”

Threats have been made back and forth between Polish customers and angry residents. Last November, there was another violent incident in which two residents were blown up when they asked a Polish car owner to leave their driveway. At Wijkmans, two glasses with yellow paint were thrown on the red tiled roof.

He has now sent hundreds of photos of nuisance situations to the municipality. A residents’ committee filed numerous complaints and objections. ‘But we were and continue to be sent from pillar to post,’ says fellow resident Andy Knobel (59), construction manager at ProRail. ‘All we want is our liveability and safety back.’

Some minor adjustments were made, such as the placement of signs ‘forbidden to drink alcohol on the street’ or ‘NP’ markings (no parking) for driveways of yards. The supermarket has also finally realized nine parking spaces behind the store. “But most customers think that is too far and continue to park their cars across the sidewalk,” says Knobel.

Supermarket owner Dariusz Oleksiak does not deny that there have been incidents. “But it doesn’t happen as often as is claimed,” he says. The problems are exaggerated. We do everything we can to prevent inconvenience. It is a small group of residents who want to get rid of us. ‘

The municipality appointed a ‘neighborhood mediator’, but he soon gave up his assignment because he had noticed an atmosphere of ‘ruse and deceit towards its residents’ at the town hall. Wijkmans: ‘It makes you despondent. We have not been taken seriously for years, neither by civil servants nor by the responsible councilors. ‘

This is also the opinion of the Ombudsman Commission, which fulfills the ombudsman’s function for the region. The residents’ committee filed a formal complaint there, which led to a damning report in February. About the way in which the municipality has dealt with the complaints of the residents: careless, improper, not lenient, not transparent, insufficiently energetic and therefore escalating, answers that have not been forthcoming for too long, incomplete, incorrect or contradictory information provision.

The municipality promised to improve. Mayor Han van Midden will from now on take ‘control’. At the municipal office he compares the failing communication policy with a classical concert, which can also result in a cacophony if all the musicians are not properly tuned in.

In contrast, he states that the municipality has put ‘a lot of energy’ into answering about 350 sets of questions, including WOB requests. Research has also been conducted into the relocation of the supermarket to an empty Aldi building in the neighborhood, which has caused a lot of noise. ‘But I’m not going to move the problem from one place in the neighborhood to another,’ says Van Midden.

The conflict has thus escalated further and further. Recently, a new row arose after residents secretly recorded a conversation with the councilor for Spatial Planning. Contentious passages of it were leaked to the local press.

How it will continue now? Mayor Van Midden is looking for a solution that is acceptable to everyone. “But you can never please everyone,” he says. ‘The government is in favor of making decisions and providing clarity. It is good that residents manifest themselves. But as a government you also have to dare to say: no is no. ‘

Local residents Knobel and Wijkmans no longer have faith in it. “Five families have already moved because of the inconvenience,” says Knobel. ‘We are not conducting a smear against the municipality, we are only exposing administrative shortcomings.’ Wijkmans: ‘They’ve been letting us down for years.’