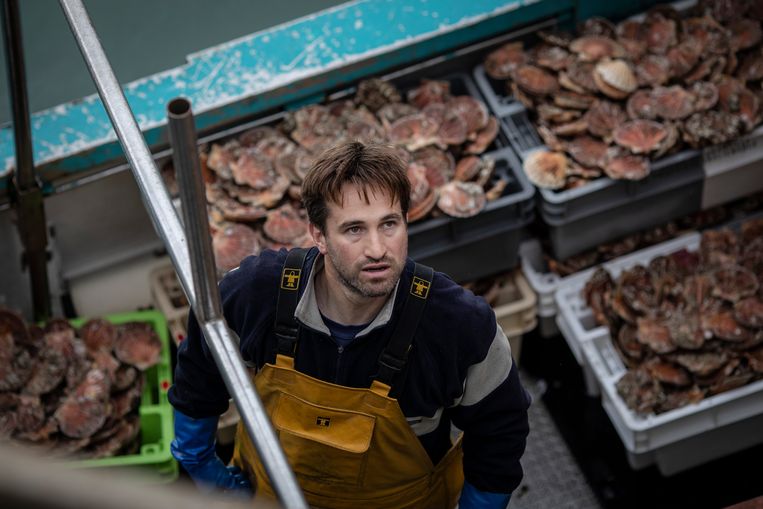 The sun makes the bay of Saint-Brelade shine. In the distance a ferry passes by, and on the beach of the village on the south side of Jersey a young man dressed in swimming trunks is laying out canoes. Bruce, Ghiselle and Adrian sit on the terrace of Les Charrien, near the Winston Churchill memorial garden. Topic of conversation: ‘the Battle of Jersey’.

“I didn’t know what I saw when two naval ships passed by here yesterday,” says Bruce, a retired Zimbabwe-born gym owner. “If the French excel at something,” laughs Ghiselle, “it’s campaigning.” “I wouldn’t be surprised if there was also a British submarine along,” says Adrian jokingly.

The battle for the port of Saint-Helier, a mile or so away, has caused a stir on the Channel Island, a British crown domain 22 kilometers from the French coast. About 80 angry French fishermen had blocked the harbor before returning after the arrival of the two British naval ships. A French fisherman even called the invasion, a day after the 200th anniversary of Napoleon’s death, ‘a new Battle of Trafalgar’. A fully-dressed member of the Jersey Militia, a group that reenacts historic battles, fired an airgun from Elizabeth Castle in the direction of the fishing boats.

The dispute over the rights of French fishermen to fish for crab and lobster, mackerel and dogfish in Jersey waters followed new conditions imposed by Jersey on French fishermen. According to the fishermen, the ‘radicalized’ island administrators are using the Brexit agreement to keep the French away. In turn, it is more difficult for Jersey fishermen to market their fish in France. There have been arguments in the past, for example when the French illegally planted their flag on the Minquiers, a group of rocky islands on the south coast that show up in books by Victor Hugo and Nancy Mitford.

The Brexit agreement has put the situation on edge, just as it has happened at other national borders. Negotiations with Norway on a new fisheries agreement have failed. In Northern Ireland, which celebrated its 100th anniversary at the beginning of this week, calls for Irish reunification are swelling among the nationalists. In Scotland, when the votes for the parliamentary elections are counted on Saturday, it becomes clear how strong the drive for independence is. Paris has already indicated that the British can forget a favorable agreement with the EU for the financial sector, so important to London.

Inhabitants of Jersey feel piggie in the middle, a plaything between two angry neighbors.

“Johnson and Macron need to talk to each other,” says Jean, an older Jerseyan, “but there’s pride in the game.” The action of the fishermen dismisses this sympathetic hotelier as a badly organized stunt. ‘I don’t know if they are right. They didn’t even have a decent spokesperson! ‘ His wife struggles with the growing interference of the big neighbor. ‘There has been talk of building a new hospital here for years, but all that’s happening is that British advisers are filling their pockets. We just want to be independent, take care of our own business. Queen Elizabeth is not called Duchess of Normandy for nothing when she’s here. ‘

The two should have nothing to do with Brexit. “I arrived here sixty years ago with a six pence coin in my pocket,” says Brittany-born Jean. ‘I’ve built up a good life here and now I suddenly had to apply for a residence permit.’ His wife didn’t have to because she has a British Jersey passport. She shows the burgundy document. ‘Jersey is not a member of the European Union, but the passport states that I am an EU citizen after all. And the passport again states that I cannot work or settle anywhere in the EU. As a citizen of Jersey, you fall a bit between the cracks. ‘

It is suspected that a form of ‘gunboat diplomacy’ is involved in the arguing countries. The British deployment of HMS Severn and HMS Tamar, coupled with populist headlines about “Johnny Frenchman,” fell right on the day of the regional elections, which were to win Johnson’s Conservatives. Regional elections will be held in France next month. Macron will have noticed that his En Marche party is doing poorly according to the polls in northwestern France, a region with many fishermen. “A Anglo-French quarrel is a popular pastime on both sides of the Channel,” said John Keiger, professor of French history at Cambridge.

However, according to Keiger, the fighting cocks have too many mutual interests to let things get out of hand, for example by implementing the French threat to cut Jersey without power. London and Paris are bound by important military and diplomatic treaties. France does not want to lose it, realizing that it cannot rely on the EU in serious international military problems. No European country supports the French in military operations more than the British. This argument reminds me of what General De Gaulle said after the uprising in Algeria. “What’s serious, gentlemen, in this matter is that she’s not serious.”

Serious or absurd, meanwhile, in the streets of Saint-Helier and all those other places on the subtropical island named after saints, the flags of Jersey, a white surface with a red Andrew’s cross, are fluttering. This has nothing to do with the end of the French blockade, but with the Liberation Day celebrated on Sunday, a celebration of the end of a real occupation, that of the Germans during the Second World War.