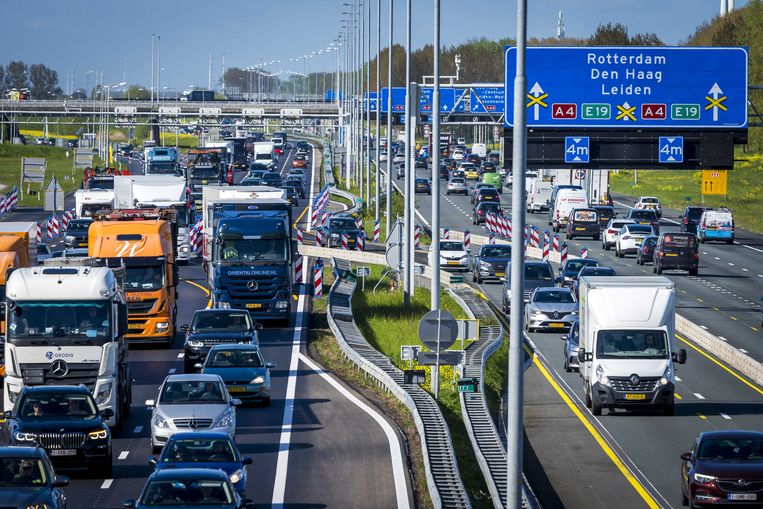 Motorists come and go in the parking lot of a gas station along the A2 near Breukelen. The site is constantly well stocked with commuters smoking a cigarette, eating a currant bun or getting a cup of coffee. The tranquility of the past period, on and along the road, seems to be a thing of the past.

Where in May the average number of traffic jam minutes – number of kilometers times the duration of the traffic jam – was 11,300, at the end of May that rose to 16,000 per day. Nevertheless, the traffic jam density is not yet close to May in pre-corona year 2019. Then the Dutch were in traffic jams twice longer every day.

What is striking is that the morning rush hour seems to be returning, says Arnoud Broekhuis, traffic information manager at the ANWB. ‘Last year there was hardly any, only in September it increased a bit. Now we see that again.’ This points to more commuter traffic. RIVM also sees a decrease in the number of homeworkers. Where in February 82 percent of the Dutch stayed (partially) at home, this was still 77 percent at the beginning of May. Less than half of home workers no longer come to the office at all.

Last year, the ANWB saw the overall traffic intensity increase from mid-June. ‘It remains to be seen whether that will be the case again.’ According to Broekhuis, this depends on government measures regarding working from home and holidays. ‘Because if it is less attractive to go on holiday abroad, more day-trippers will head out.’

Who are the commuters getting back into the car?

Parastoe Koshai puts on her sunglasses and mask as she gets out of the car. She has just enough time in her busy schedule to get coffee for the road. Once a week she travels by car from Amsterdam to Den Bosch. The rest of the days she works from home. ‘I think it’s dellicious. I can take packages and do a little cleaning. Moreover, I am much more efficient, because I can use my travel time to work.’ She still goes to the office for appointments with colleagues and customers.

“The software company I work for has created a system where colleagues can log in if they want to come to the office,” says the sales representative. ‘The company is very free, we can come if we want, but we don’t have to.’ Koshai notices that it has been busier on the road lately than before. ‘I’m often stuck at Den Bosch.’ The time in traffic jams is not lost: ‘I call colleagues to discuss the day before.’

At the office of his company that makes charging infrastructure, it has not been quiet during the lockdown. ‘Only an older employee who was afraid of getting corona often worked from home.’ The man has now been vaccinated and he is also working again at the office in Best Brabant.

Although he builds infrastructure for electric cars, he now sits on a petrol engine. ‘I come from my girlfriend, who lives in Amsterdam. It’s easier to park the motorcycle there’, he says slightly apologetically.

He enjoyed the tranquility of the road during the lockdown, especially during the curfew. ‘I wrote an employer statement for myself a number of times. Except for a few trucks on the road, it was completely quiet. That was very special.’

While people around her are rushing for coffee and driving on, Charly Eversdijk is sitting quietly on the terrace in the morning sun. “I’m very early today because I took my brother to the airport.” Eversdijk comes from Amsterdam and travels after the stopover at Schiphol to Sliedrecht. Working from home has hardly been an option for her lately. ‘I decorate the windows of a furniture store, so I have to know what that looks like.’

She drives all over the country, to the various branches. ‘Especially around Amersfoort, Utrecht and Maastricht I have noticed lately that it is getting busier.’ She also loved the silence on the road during the lockdown. ‘Since the terraces have been opened, it seems like everyone thinks everything is possible again.’ In addition to being busier on the road, she says it is also more dangerous. “Like we forgot how to drive.”

‘I don’t like to rush,’ says Lorenzo van Velzen, as he maneuvers through the store at the gas station. ‘What will it be today?’, he asks himself aloud. They become currant dumplings. Van Velzen does everything as an independent entrepreneur: from renting equipment for creative projects to freerunning and dancing. ‘People may know me from So You Think You Can Dance.’

Usually he only leaves after the crowds and prefers to go by train. ‘But that was not possible, because I am now on my way to have adjustments made to my bus.’ He takes plenty of time: his appointment is in Utrecht at 9 o’clock and he is already at the gas station at Breukelen at a quarter past eight. ‘My navigation sent me over an 80 kilometer road to avoid the rush hour. That worked out well, I think it’s cool to go slow.’