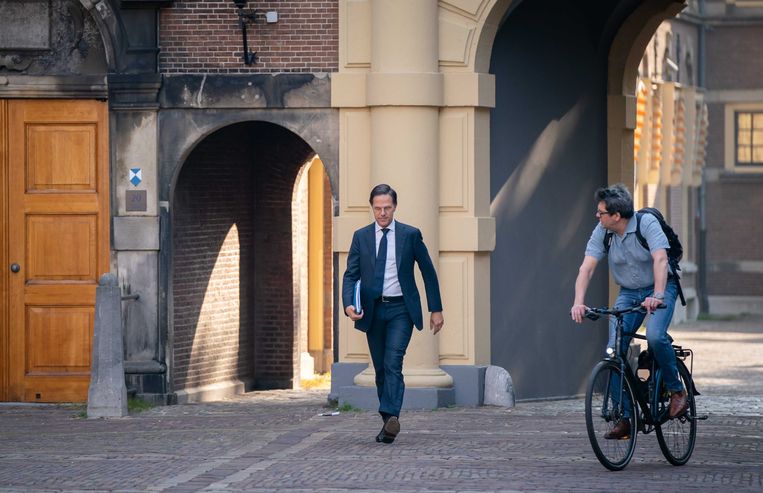 “Everyone was talking about a fast formation, but the pressure is completely off. Vaccination is going well, the terraces are opening, a rosy summer is coming. Meanwhile, the incumbent caretaker cabinet does not behave as if it were caretaker. It is decided to bring IS members back from Syria, everything continues as usual.

‘Informateur Mariëtte Hamer was supposed to present her final report to the House last Sunday at the latest, but she did not meet that deadline. Yet she says she doesn’t take it too seriously: the most important thing is the result and the pace is determined by the parties themselves. Yesterday I asked D66 leader Kaag how long it could take for her, but then you also notice that there is not much haste behind it. She believes that you should take your time and not put a date on it. I asked Rutte this morning and he said: ‘I only have 21.9 percent of the votes’, like: it is not just him. So I have no idea how much more time Hamer will take.’

If everyone is in the relaxed summer mode, will we still get a new cabinet?

“The formation is at a standstill, again. The question ‘who with whom?’ seemed to be getting closer, but it turns out that the parties are not ready for that at all. Behind the scenes you hear that the formation is only three weeks old. After the hassle with Pieter Omtzigt, the minutes, the crisis of confidence with Rutte, things are only now starting to normalize. The formation process is only now entering normal waters, with parties increasing their prices by saying ‘I don’t want to go with that one and I don’t want to with that one either’. But I also hear that it cannot be otherwise than an attempt with VVD, CDA, D66, PvdA and GroenLinks.’

But CDA and VVD don’t want that at all, do they?

A source at one of the left-wing parties says: ‘We depend on each other. We are also not looking forward to talking to the VVD and CDA, but it is inevitable’. If you look at the election results and the parties that have already excluded each other, it’s just a very difficult playing field.

‘VVD and CDA think two left-wing parties are too much, but you are talking about 17 seats out of a 90-seat coalition. There is also surprise at the Binnenhof that they want one of the two parties, but not both. That means that there are no substantive objections, but that you don’t want two parties purely for the image.’

Do VVD and CDA not have a preference for the PvdA?

‘What I hear is that they mainly know what the PvdA can do for you. They have already governed with the PvdA and it is a governing party. The VVD and the CDA often quote the argument that ‘if there is ever a fire in Moria, we will have a cabinet crisis here with GroenLinks’. It’s talked about in those terms. PvdA and GroenLinks, on the other hand, are very surprised that VVD and CDA are having trouble with them, after they say they have taken responsibility time and again by helping the cabinet burn out with their support. While the VVD and CDA in Brabant did cooperate with Forum for Democracy until recently.’

GroenLinks and PvdA seem to hold each other firmly. Are there any other cabinet options? CDA leader Hoekstra mentioned JA21, Volt and CU.

‘JA21 would like to talk, but that party is excluded in advance by D66. D66 doesn’t feel much for Volt either, because then you keep a minority in the Senate and still have to seek support from GroenLinks and the PvdA. CU is the most realistic candidate to join in the long term, but that is really the last chance. That would be a cabinet against will and thanks. So the CU is definitely an option, but only in case those five parties really go dead. CU leader Segers wants that too, because then he is the only option and he has a good negotiating position.’

‘We are actually in a formation dance that everyone already knows how it ends. Just go talk to each other, you might say. But the parties still feel that they have to show their supporters how difficult it is.’

The packed days with all kinds of interest groups seem to be over for informer Mariëtte Hamer. Yesterday she spoke separately with Hoekstra and Kaag, this morning Rutte came for coffee. Laurens Dassen (Volt) and Kees van der Staaij (SGP) will also visit today, but that is mainly to discuss the budget for 2022. The motion by Kaag and Rutte that Hamer appointed as informateur a month ago included that Hamer should also start working on a recovery plan and the budget for 2022. Because Volt and the SGP supported that motion, they are now invited to discuss the budget.

Tomorrow Hamer will talk to pairs again. Hoekstra (CDA) and Klaver (GroenLinks) are allowed to sniff each other in the morning, in the afternoon the duos Kaag (D66) and Segers (CU) and Rutte (VVD) and Ploumen (PvdA) come together.