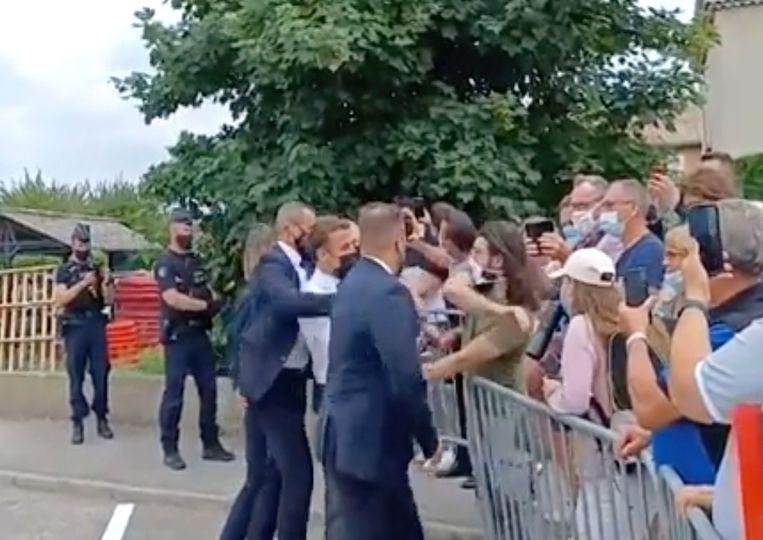 “À bas la Macronie,” Damien Tarel yelled before lashing out at Emmanuel Macron from behind the crush barrier: “Down with Macron.” Shortly afterwards, he was overpowered by security guards and officers. Footage of the incident quickly spread on the internet.

The judicial process in this case is at least as swift. Two days later, Tarel was already in court, who sentenced him on Thursday afternoon to eighteen months in prison, of which fourteen were conditional.

The French Public Prosecution Service had demanded a year and a half. Incidentally, that is not the maximum punishment for ‘ill-treatment of a civil servant’, as beating the president is called in legal terms: that carries a maximum of three years in prison and a fine of 45,000 euros.

Asked about his motives, Tarel told the judge that Macron represents “the downfall of the country”. The man also stated that he actually wanted to pelt the French president with eggs or press a cake in the face. He ‘regrets’ his deed, writes newspaper Le Monde, which he committed in a fit of ‘impulsivity’.

The unemployed Tarel is angry because, in his opinion, not enough has been listened to the yellow vests, a French protest movement from 2018. Macron called the attack an isolated incident. “We shouldn’t let extremely violent people take over the public debate, they don’t deserve it,” he said several hours after the blow. Prime Minister Jean Castex called it an affront to democracy.

In addition to Tarel, the police also detained another spectator. The two are friends. During a search of the house, the police found weapons, a copy of Mein Kampf of Adolf Hitler and a flag with communist symbols. The friend will have to answer for illegal possession of weapons next year.