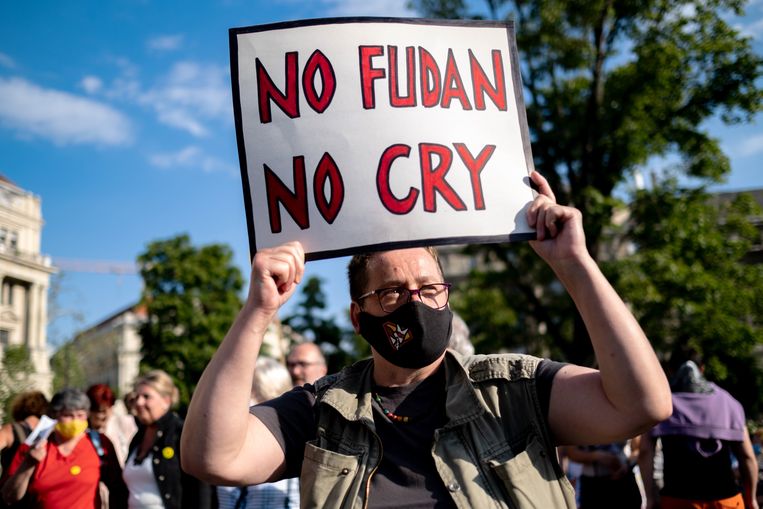 The planned Chinese university campus in Budapest has quickly become one of the main points of contention in Hungarian politics. Last weekend, thousands of Hungarians took to the streets in anger – the first major protest since last months’ strict lockdown. They are afraid of more Chinese influence in Hungary and denounce the price tag of 1.5 billion euros that hangs on the campus.

Shortly afterwards, a Hungarian government spokesperson hinted at the possibility of a referendum. Prime Minister Orbán confirmed this on Thursday afternoon: “This has become a political issue and we have to decide this in a way that is acceptable to everyone.” With this, Orbán is attracting a potential referendum; the opposition, led by Budapest mayor Gergely Karácsony, is also pushing for a campus plebiscite.

A referendum does not depend on the ‘grace’ of the government, Karácsony emphasized this week. It will come anyway, according to the mayor, ‘when we want it and not when the government wants it.’ Orbán’s government expects to hold the referendum in early 2023, nearly a year after the April 2022 elections.

The fact that Orbán wants to present the matter to the population is not a sign that he is slowing down, experts say: it is a political maneuver to prevent the campus from becoming an election theme. “Typical Fidesz,” political analyst Péter Krekó told Reuters news agency, “to take two steps back and wait for the issue to lose momentum.”

According to a recent poll by think tank Republikon Intézet, the arrival of Fudan is extremely unpopular, also outside Budapest: two out of three Hungarians are against. Opposition leader Karácsony made the campus one of the central themes of his campaign. He hopes to defeat Orbán and his party Fidesz in the elections next year.

In protest against the campus, Karácsony last week had a number of streets around the proposed campus location named after Chinese human rights violations, such as ‘Uyghur Martyrs Street’. At the demonstration last weekend, he called the arrival of Fudan “the final and utter moral suicide” of Orbán’s party Fidesz.

Resistance to the Shanghai-based Fudan University branch is growing day by day. And that’s not just because of the strong language of Karácsony. In April, an investigative journalist from news site Direkt36 revealed that the campus will cost 1.5 billion euros, more than the government spent on higher education in the whole of 2019.

Orbán also lands a university that, although one of the most prestigious in China, officially subscribes to the teachings of the Chinese Communist Party. He expelled the Central European University, an internationally renowned university, from Budapest. The government made it so difficult for the university that it moved to Vienna in 2018.

In addition, the campus will be located where large-scale student housing was to be built. The government denies that space for the campus is at the expense of student housing. But according to the Budapest city planner, that is incorrect.

The campus would open its doors in 2024, making it China’s first academic branch in the EU. Construction has been completely outsourced to China, Direkt36 revealed. The 1.5 billion euros will go to Chinese building materials and Chinese workers. The amount does not come from the state treasury, but the Hungarian government is taking out a loan from Beijing. China acts simultaneously as a contractor and creditor.

Critics fear the political and economic influence that China is accumulating in the country in this way. They are also afraid of espionage. The company responsible for the construction previously delivered a building in Ethiopia that was fully equipped with listening devices. Copies of the data on the server were sent to China overnight.

The Fudan campus is just one example of how Orbán wants to strengthen ties with China. This policy, which his government calls the “Eastern Opening,” includes including Chinese vaccines in the vaccination program.