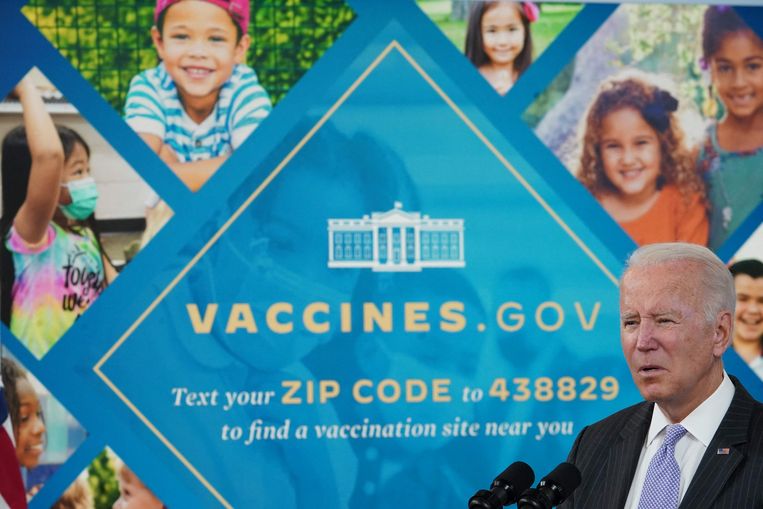 The top judges’ rejection of an important part of his corona policy could not have come at a worse time. Biden’s attempt to salvage two electoral laws also failed miserably. After a visit to Congress and a meeting with two key Democratic senators whose support he needs, it emerged Thursday that passing the bills in the Senate is virtually out of the question.

Republicans and former President Donald Trump immediately declared victory after the court overturned Biden’s controversial vaccination measure by a six-to-three vote. At the end of last year, the government decided that employees of companies with more than 100 employees had to be vaccinated or tested weekly. About 84 million Americans, two-thirds of all workers, were affected by the measure.

But like 27 Republican states and employers’ organizations that challenged the decision, the court found that the White House had gone out of bounds. In recent months, lower courts could not agree on whether the vaccination or testing obligation was acceptable. However, according to the highest judges, the federal labor and health service OSHA has no authority at all to impose such a drastic measure.

The Supreme Court concluded that Congress gave the agency the power to regulate occupational dangers but not health care more broadly. https://t.co/IgCRoMOsMT

All conservative judges, three of whom have been appointed by Trump, have turned against the White House. Republicans in Congress were also furious that Biden wanted to force many Americans to get vaccinated. “The Supreme Court has confirmed what we all already knew: Biden’s disastrous vaccination obligation is unconstitutional,” Trump said. who had gone to court to torpedo the decision.

A small windfall for Biden was that the court dropped another vaccination measure. About 17 million employees of hospitals that receive money from the federal government are required to be vaccinated. They are not given the opportunity to be tested as an alternative. Last year, Biden also imposed a vaccination requirement on all federal government personnel. He hoped with all these measures to significantly increase the vaccination rate. As of Friday, 63 percent of the 331 million Americans had been fully vaccinated.

The president said he was disappointed that the judges had “chose to block life-saving demands for workers.” He appealed to states and companies to now come up with a vaccination or testing obligation. Biden pointed out that one-third of America’s top 100 companies have already done so. He called the obligation for employees who refuse a vaccination to be tested weekly and to wear a mask at work “a very modest burden”.

The court defeat comes at a time when a record number of Americans are being infected or hospitalized every day due to the advance of omikron. Every day, on average, about 800,000 new infections are added and about 1,800 inhabitants die. There were about 156 thousand corona patients in hospitals on Friday. Just over 846 thousand residents have succumbed to the disease since the pandemic began.

Biden could have used a Supreme Court victory as he takes stock of what he accomplished in his freshman year. He will spend a year in the White House on Thursday. He will then have to watch as it is again emphasized that one of his biggest plans, the social security and climate plan Build Back Better, has still not been passed in Congress due to opposition from his party colleague Joe Manchin. This senator, along with party colleague Kyrsten Sinema, is also a major stumbling block in passing the two electoral laws.

The pair oppose changing the rules in the Senate, where Democrats and Republicans balance each other so that the laws can be passed by a simple majority. Biden had hoped these days to present the passing of both laws as one of his most significant successes. On Thursday, he seemed to throw in the towel. “I hope we can pull this off, but I’m not sure,” the president told Congress.