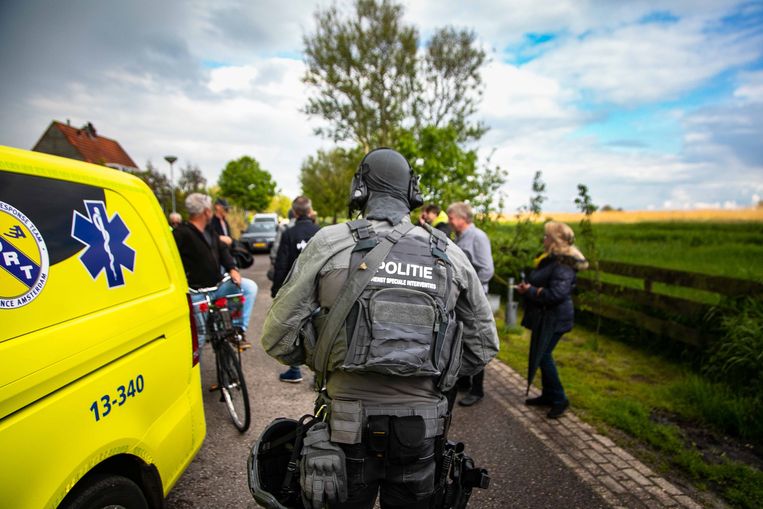 In the night from Friday to Saturday, five people are stabbed in the Amsterdam neighborhood De Pijp. Within a few minutes, the emergency services rushed up to receive assistance from a special elite corps: the Special Interventions Service (DSI), intended to arrest terror suspects and extremely dangerous criminals. This time that is not necessary: ​​the 29-year-old, presumably confused perpetrator has already been arrested. The DSI only provides medical assistance.

Two days earlier, the Amsterdam police can also count on their colleagues from the DSI. From Amsterdam-Noord to the village of Broek in Waterland, both units hunt for the perpetrators of a violent raid on a valuables transport. The DSI employees, armed to the teeth, attract a lot of attention on social media. A citizen filming compares the scenes in front of him to the computer fighting game call of Duty.

Who are these men who are ready so quickly and instantly give civilians the feeling that their neighborhood has turned into a war zone? And how do they work?

It is not surprising that residents are shocked when the DSI makes its appearance, says DSI spokesman Dennis Janus. Speed ​​and overwhelm are precisely the great strength of the service, which turns out about eighteen hundred times a year. ‘We look very tough and are heavily armed. We have to be prepared for the unexpected: we certainly don’t go in with too few resources. ‘

It is not without reason that all DSI’ers wear the motto ‘Praeparatus Esto’ on their sleeve – Latin for: ‘Be prepared’. But the DSI wants to use violence as little as possible. ‘We call ourselves specialists in violence control. Because of the speed and the way we work, we often don’t even have to use force. Nine times out of ten, a suspect lies on the ground before he even knows what is happening. ‘

The DSI is a unique collaboration between the police and Defense: in addition to all police arrest teams, it also houses members of the Marine Corps, the Commando Corps and a special arrest team from the Royal Netherlands Marechaussee. Nowhere in the world does this work together in this way.

The service is the result of a true anti-terrorist evolution. The first Dutch special unit was established after the attacks on the Olympic Games in Munich in 1972. Over the years more and more units have been added and merged. The last major expansion dates from 2015: in response to attacks elsewhere in Europe, The Hague structurally invested tens of millions more in ‘strengthening the security chain’.

In total, the DSI now has more than four hundred members, called ‘operators’, who are all trained to, for example, arrest firearms dangerous suspects. They are all men, but according to the spokesman that is not a policy.

Because the service officially falls under the National Police, all soldiers have at least completed a boa training. ‘Even though you are full-time with the DSI, almost every member of an arrest team is still a basic police officer. If you cycle with your phone in your hand, they could fine you. ‘

The unit is noticeably proud of its position between police blue and army green – which has led to light gray-green uniforms on the mixing palette. ‘Internally, we call ourselves’ purple,’ said the spokesperson. ‘We are not police, not defense – no, we are DSI. We are the best of both worlds. ‘

On the one hand, the position of the DSI in the Netherlands is indeed exceptional, says Jaap Timmer, police scientist at VU University Amsterdam. ‘Both police and Defense contribute in a personal sense. It is unique that this comes together under one roof: everyone falls under the responsibility of the head of the DSI. Moreover, all members receive the same training. ‘

“It is true that anti-terrorist units more often consist of police officers with a military background,” Timmer immediately nuances. Germany, for example, has a police unit that is organized in a military way. And in southern European countries, the largest police forces have military status, and all have an anti-terrorist unit.

The DSI mainly distinguishes itself from similar teams from other countries by the speed with which the service is ready. So-called Rapid Response Teams, three fully equipped DSI’ers in an armored vehicle, are constantly on the move – throughout the Netherlands, but often near major cities – to help with a possible attack as quickly as possible. ‘Often they only have to assist the local police. But in any case they are on site much faster than when they have to come home and change clothes. ‘

Several DSI teams were deployed on Wednesday during the escape attempt via the meadow in Broek in Waterland. Then you have to think of dozens of operators, says the spokesperson.

In case more men are subsequently needed, the service has a Quick Reaction Force on hand: extra personnel on-site. All operators in the Netherlands can even be called up via a special ‘DSI alarm’. This happened, for example, in the attack on a tram in Utrecht in 2019.

Such a heavy remedy was not necessary for the incident in Amsterdam and Broek in Waterland. In fact, the Amsterdam police themselves were responsible for much of the work. “It is admirable what ‘blue’ has done there,” the spokesperson wants to say. ‘The DSI is fully prepared for the violence, but the local police have not been trained to do so. Yet they have. You can only express a lot of appreciation for that. ‘

The fact that the DSI can act quickly and overwhelmingly also has a downside. On December 21, 2020, the Military Chamber sentenced a DSI member to a community service sentence of thirty hours for serious bodily harm due to inattention. On King’s Day 2019, he accidentally shot the innocent Rubens Grouwels in the upper arm, resulting in physical injury and trauma. The victim had been mistaken for a terrorism suspect. During the arrest, the convicted military police’s gun went off, the bullet causing, among other things, arterial bleeding. The Military Chamber ruled that the DSI’er had been ‘considerably inattentive’, partly because DSI members are specially trained to handle firearms under pressure.