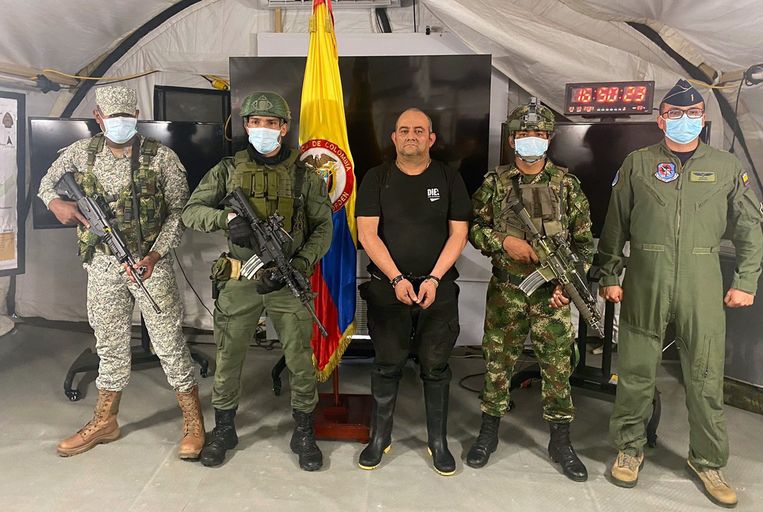 “This blow to the drug trade can only be compared to the fall of Pablo Escobar in the 1990s,” said Colombian President Ivan Duque.

‘Otoniel’ was the country’s most wanted criminal and was regarded as Colombia’s biggest drug criminal, the world’s leading exporter of cocaine. He is charged with various crimes, including drug trafficking and smuggling, murder, kidnapping and extortion. The United States also wanted to see him arrested and previously offered a reward of 5 million dollars (4.3 million euros) for information about his whereabouts.

Usuga had been on the run for years. He was very skillful in hiding and always managed to stay out of the hands of the police. He had to give up his luxury life in recent years because of the large-scale hunt that was made for him. According to Colombian authorities, he traveled alone on foot or on the back of a donkey, did not use a telephone and never slept in the same place for more than two consecutive nights. “We had been chasing Usaga for seven years,” General Fernando Navarro, head of the Colombian army, said after the gang leader’s arrest.

According to the Colombian newspaper El Tiempo The National Police received information about Usuga’s whereabouts two weeks ago. He was arrested on Saturday afternoon (local time) in the city of Turbo, in the Antioquia department in the northwest of the country, not far from the border with Panama. That is also the area where the ‘Otoniel’ gang originated. Later Saturday he was transferred to the capital Bogotá.

The operation, baptized Osiris – which refers, among other things, to the god of the dead from Egyptian mythology – involved more than 300 soldiers and police officers. 24 helicopters were deployed.

Usuga David was born on September 15, 1971 in Neclocli, northwestern, in the same department where he was arrested on Saturday. At the age of 18, he joined the People’s Liberation Army (EPL), a Marxist guerrilla movement that ceased operations in 1991. When the balance of power in the country changed, he joined a far-right paramilitary organization.

He also drew from this group for the members of the gang he built up with his brother Juan de Dios. The Clan, made up of 1,200 armed members, most of whom are former far-right paramilitaries, is active in 10 of Colombia’s 32 provinces. The criminal network has branches in nearly 300 of the country’s 1,102 municipalities. In addition to drug trafficking, they are also said to be involved in illegal mining.

‘Otoniel’ came to the head of the Clan del Golfo after his brother Juan de Dios was killed in a clash with police in 2012.

Colombian authorities launched an operation against him in 2016. Dozens of gang members were killed or imprisoned, the government cracked him down financially and Otoniel has been on the run ever since, police said. The gang leader announced in a video message in 2017 that he would turn himself in, but it never came to that.

In March this year, Colombian police and the US drug detection agency DEA arrested his sister, Johana Usuga. She was extradited to the US to face drug trafficking and money laundering charges.

Usuga’s arrest was big news in Colombia. President Ivan Duque announced the arrest to the people in a special speech lasting nearly half an hour, thanking the army and police for years of efforts and the eventual arrest of ‘Otoniel’. “This is the heaviest blow we could inflict on the drug trade. This blow is only comparable to the fall of Pablo Escobar in the 1990s,” said the Colombian president, calling on the remaining members of the clan to surrender. Pablo Escobar was the feared leader of the infamous and violent Medellín cartel, which dominated Colombia for years. He was shot dead by the police in 1993.

Defense Secretary Diego Molano Aponte shared the news on Twitter. ‘Symbol of evil, recruiter of children’, he wrote about Usuga. ‘Thanks to our soldiers and police officers! The promise to end drug crime is being fulfilled,” the minister said.