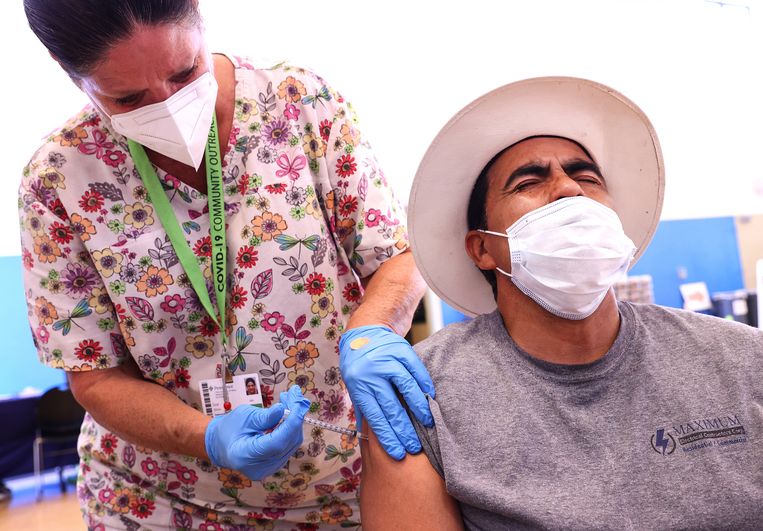 While the number of corona cases in the United States is rising by tens of percent per week, the vaccination rate is stagnating. Converted to population, the Netherlands has vaccinated more inhabitants than the US, while that country got off to a much more energetic start. The problem lies in the extent to which Americans are willing to come and get a shot.

Some states have already offered amounts of money to increase the willingness to vaccinate, or they handed out lottery tickets. As for the Biden administration, all unvaccinated Americans who get vaccinated will get $100.

A strategy in which the US is not unique: since May, Serbs have been paid 25 euros if they are vaccinated. There are also plenty of rewards in other ways. The Czech Republic is giving officials who are vaccinated two extra vacation days, Prime Minister Andrej Babis announced on Friday.

Studies conducted on previous vaccination campaigns show that such incentives can work. Take a British study of a thousand 16- to 18-year-old girls who were invited for an HPV vaccination. Of the group that was offered 45 pounds (more than 55 euros), 10 percent more showed up than the group that was not promised money.

According to an extensive literature review on the subject, published in 2008 in the journal Medical Care Research and Reviewtime and again it appears that price incentives lead to a higher vaccination coverage. The researchers note that many studies mainly focus on people with relatively low incomes. This makes it difficult to make general statements.

There are also indications that some are more likely to get a corona shot specifically in exchange for money. For example, in a survey of 7,000 unvaccinated Americans, one-third indicated that they would be vaccinated sooner if there was money in return. At the highest suggested amount, $100, this effect was strongest.

Little is known about how this works out in practice. US researchers who compared vaccination rates before and after a lottery in Ohio – in which participants could win up to $1 million – failed to detect an effect. Obviously, the opportunity to win money is not the same as a guaranteed amount of money.

It is also not easy to determine what effect the reward of 25 euros in Serbia has had on the vaccination rate. It is clear that in any case it has not turned out to be a panacea. About 40 percent of the Serbian population has had at least one shot, and that percentage is only slowly increasing. By way of comparison: in the Netherlands this percentage is over 70 percent.

There are also ethical objections to offering money, said Andrea Evers, professor of health psychology at Leiden University, earlier de Volkskrant. ‘Suppose someone on benefits needs that money very badly, but is actually fiercely against vaccination. Such a person can then be vaccinated purely for the money.’ For example, distributing amounts of money can be indirectly imposed on a part of the population.

Evers sees more in small rewards like a bunch of flowers or a free drink. Such strategies are already being used. For example, the Russian capital Moscow lures residents with free ice creams to the test street. And in April, the . reported Hindustan Times that vaccinated people were given hand blenders or golden nose buds in the Indian city of Rajkot.

The Dutch Ministry of Health is not considering reaching for financial incentives or other rewards, a spokesperson said. That would not be necessary either, because the willingness to vaccinate among the Dutch appears to be relatively high.

‘Minister Hugo de Jonge has always said that he is not in favor of vaccination compulsion or urgency,’ he continues. ‘Offering a (financial) compensation or gift for getting a jab therefore does not fit within our policy.’