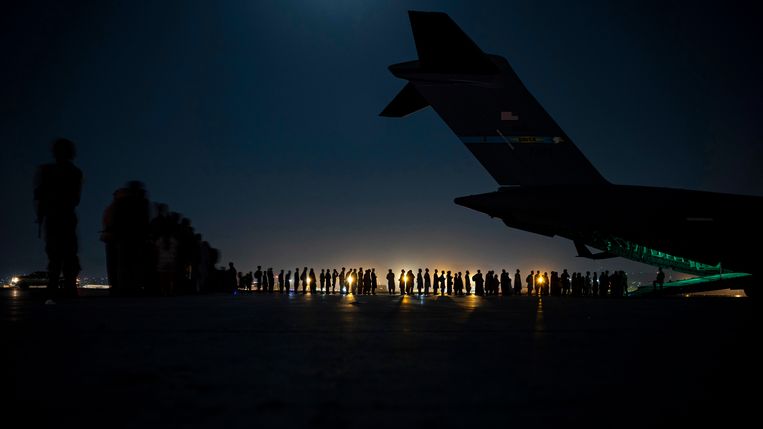 It message is part of 800 pages of declassified communication between the Ministry of Foreign Affairs in The Hague and the diplomatic post in Kabul. The diplomat responds to a civil servant on a draft ‘affaires report on Afghanistan’ that the cabinet promised to the House of Representatives later that week. The author recalls that it was no longer possible to ‘perform’ the ‘tasks’ of the embassy without the ‘requested force protection‘, but that this fact has been omitted from the statement of fact.

The requested military aid finally arrived on Wednesday, August 18, a few days after the Taliban had already taken Kabul. That was already too late for the first embassy team on the scene. The deputy ambassador had already left Kabul on Monday, August 16, “in the interest of the safety of the entire team,” the statement said. “The US local representation had informed the Dutch team that it could no longer guarantee the safety of the team.”

In the embassy’s own ‘security plan’ – that partly also included the released documents, entitled ‘Overview of indicators and measures for Kabul in the event of a deteriorating security situation’ – state that military support is needed the moment ‘the government leaves Kabul’ and the ‘chaos in the city increases’. That was already the case on Sunday 15 August.

The departure of the first embassy team was heavily criticized by a number of MPs. It was suggested in various media that the responsible diplomat had ‘left with his tail between his legs’. In reality, the lack of military support also resulted in the embassy staff having to leave Kabul at the spur of the moment.

As a result, the Netherlands had no diplomatic presence in Kabul for two days, until the replacement, new ambassador flew in with military protectors on Wednesday, August 18. The 48-hour absence of Dutch representation in Kabul was to the disappointment of the ministers involved.

According to the report of the facts, they saw the importance of keeping the embassy open ‘with at least one embassy representative and security to enable a proper transfer to a new team and to keep a good eye on developing evacuation options for Dutch nationals, local personnel and interpreters.’

Both the submitted requests for military assistance and the reason why they were not complied with in time did not end up in the final statement of the facts. They are also not included in the 800 pages of correspondence released by Foreign Affairs Minister Ben Knapen, among others.

‘The question is, therefore, on what basis this factual account was established?’, the author states in his/her email to the Ministry of Foreign Affairs. The text is ‘unfortunately incomplete’. The author also notes that the report gives the impression that The Hague had no insight into the risks faced by embassy staff in Kabul, while there were ‘frequent reports’.

This revelation is remarkable because on Tuesday, in answers to parliamentary questions from Kati Piri (PvdA) and MP Pieter Omtzigt, Minister Knapen wrote that the embassy did not recommend making military capacity available until Monday 16 August, i.e. after Kabul had fallen over the weekend. propose additional protection.’ Only then did the Minister of Defense give orders to soldiers to leave.

Requests for military assistance played an important role in the evacuation attempts of several Western countries in the dramatic days surrounding the fall of Kabul. On Friday, August 13, it was already clear that the situation in Kabul was becoming very unpredictable and Western embassies started taking emergency measures to evacuate. The Netherlands also did that.

Representatives of NATO countries met in Kabul to discuss the situation. It probably also discussed the imminent termination of the guarantee previously issued by the US that other embassies would be protected.

This is one of the reasons why Germany decided on Saturday 14 August, the day that Defense Minister Bijleveld went to the movies The Battle of the Scheldt was going to send 600 soldiers to Kabul. These arrived the following Monday evening, allowing the Germans to continue working from the airport – as did the French and British who also had their own military reinforcements at the airport.

The Netherlands did not have that. The remainder of the embassy team, which had been working from a makeshift office at the airport from Sunday morning, were only assisted by a few personal security officers from the Royal Netherlands Marechaussee who provide security at the most dangerous diplomatic posts in the world. Through these channels – just like through the military adviser at the post – there has been direct contact with the Ministry of Defense all the while about the necessary help.

During the weekend of the fall of Kabul, many consultations were held at official level about what to do, say those involved. On Saturday 14 August, there was an ad hoc ministerial meeting between the ministers involved and Prime Minister Rutte, reports the factual account. That day, a Defense liaison officer left for Pakistan to prepare ‘possible evacuation via Islamabad’. ‘The Defense indicates that it can deploy military resources for evacuation and reports that all possible capacities are being kept available for this purpose.’

A source within Defense confirms that the special forces were ready and ‘eager with impatience’ to be sent to Kabul that weekend. ‘This is what you do your business for, saving lives.’ But a decision to send soldiers was not made in those days, between the film and Minister Kaag’s dinner with the opposition. That only happened on Monday, when the Dutch representation had to leave the airport in Kabul – just like other western countries that had no reinforcements approaching at that time.

This ‘security plan’ from the embassy in Kabul states that military support is needed if ‘the government leaves Kabul’ and ‘chaos builds up in the city’. That was already the case on August 15. However, NL soldiers were not ordered to go to Kabul until Aug 16 and they did not arrive until Aug 18 pic.twitter.com/2VVwgiVbW5

The majority of the House of Representatives seems to support the policy of Minister of Foreign Affairs Ben Knapen. He promises to ‘do everything possible’ to get many more Afghans who worked for the Netherlands to the Netherlands, but at the same time demarcates that group in all kinds of ways.

Kati Piri (PvdA), one of the main critics of the cabinet on Afghanistan in recent months, expressed satisfaction in a debate on Wednesday that ‘the minister says he will make unequivocal efforts to bring Afghans who are in mortal danger here. You can also say from the opposition: a good step.’

Salima Belhaj (D66) herself denied that the so-called Belhaj motion, which aims to bring all Afghans who worked with or for the Netherlands to the Netherlands, is delimited by the introduction of criteria that are not mentioned in that motion. She pointed out that those criteria only apply to the attempts to actively bring these Afghans to the Netherlands, not to their right to asylum.

Knapen said it looked at what is “realistic, possible and achievable” and that there is “no deadline”. “This has to be done until it’s done.”