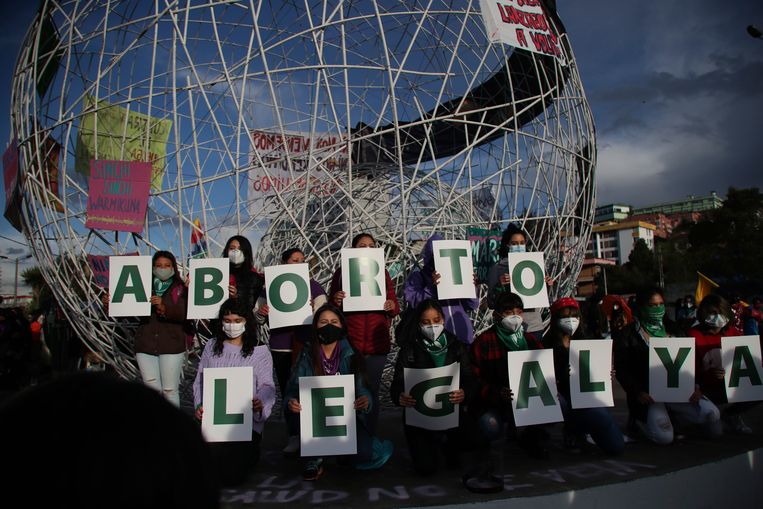 With the judgment of the Constitutional Court, Ecuador joined a group of Latin American countries on Wednesday that are broadening abortion laws. There are more and more pro-abortion protests on the continent. In January, abortion was fully legalized in Argentina.

Rape resulting in unwanted pregnancy is common in the Latin American country, especially among young women and girls. This is stated in a report by the National Women’s Coalition of Ecuador, one of the organizations that campaigned for the abolition of the abortion ban for rape.

The organization calculated that nearly 14 thousand women were raped between 2015 and 2018. About as many people live in Ecuador as in the Netherlands. If a pregnancy followed, women were not allowed to terminate it. Between 2008 and 2018, 20 thousand girls under the age of 14 (the age at which consensual sex can take place according to Ecuadorian law) gave birth to a child, in the 15-19 age group this was more than half a million. The Women’s Coalition states that one in four of them is a victim of sexual violence.

The coalition is one of three Ecuadorian women’s rights organizations that brought the law to the Constitutional Court through petitions. The court ruled that the relevant section of the law is unconstitutional. Abortion was not completely banned in Ecuador, but subject to extremely strict laws. It was only allowed in the event of danger to the life of the mother and rape of a woman who is mentally handicapped. In other cases, abortion could put a woman on three years in prison. The ruling of the court broadens the law slightly and may lead to a complete reform of the legislation on abortion.

Women’s rights organizations are satisfied with the verdict. According to the Coalition, it is a ‘historic day’, but continues to fight for women’s rights. Left-wing progressive president Lenín Moreno hopes the decision will benefit “ women’s welfare and rights ” in the country, he wrote on Twitter.

The debate on abortion and women’s rights has been gaining momentum in Latin America lately, a climax of years of struggle for women’s rights. On the strongly Catholic continent, where abortion is practically forbidden almost everywhere, this sometimes leads to changes in legislation. Recently, Argentina fully legalized abortion until week 14, a resounding victory for abortion activists. With this, the large country joined Cuba, Guyana, Uruguay and some states of Mexico.

The swelling protest is called the Green Wave, after the green color worn by the activists and protesters. This visual language is now also being adopted outside Latin America. Some of Poland’s pro-abortion protesters are also wearing green in protests against the country’s recent curtailment of abortion law. In some Latin American countries, the Green Gulf is provoking a conservative counter-reaction. In Honduras, a total ban on abortion was recently firmly enshrined in the constitution. Brazil also tightened the abortion law.