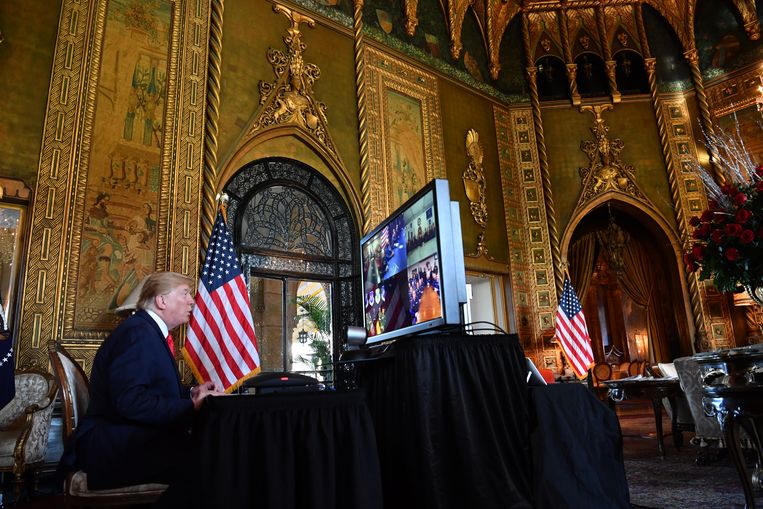 He had never seen such a beautiful piece of chocolate cake. The main course of the dinner with Chinese President Xi Jinping was just over when that amazing dessert was put on the table. The best chocolate cake ever. President Xi had been enjoying it immensely, US President Donald Trump told television channel Fox in April 2017.

Trump had invited Xi Jinping to his Mar-a-Lago resort in Florida for an official state visit. That the dessert was of excellent quality had therefore not really surprised him. It was also nice that he obviously did not have to pay for dinner; after all, it was his own resort and he was also there to hold office as president.

Even better was that Trump earned his own dinner. Because after the tables were cleared, Mar-a-Lago sent a bill of $ 7,000 to the government for the dinner of a total of thirty people. And so the American taxpayer paid entrepreneur Trump the bill for President Trump’s dinner.

It wasn’t the only time Trump cashed in on his presidency. A journalist from The Washington Post tried to collect all the receipts that Trump companies submitted to the government in recent years and came to a total of at least $ 2.5 million.

Trump visited his own resorts, hotels or golf courses more than 280 times as president. In April 2018, for example, he received Japanese Prime Minister Shinzo Abe at Mar-a-Lago, which resulted in a bill of USD 6,000 for the flowers to liven up the visit.

Trump National Golf Club Bedminster sent the government a monthly bill of $ 17,000 for the rental of a cottage. It was hired by the Secret Service, which housed agents in it to protect Trump and his family. And because Trump and his entourage’s visits to the golf club were unpredictable, the Secret Service had only permanently recorded the cabin.

When Trump is no longer president, all eyes will be back on his corporate empire. How is he going to keep that going? The American media has carefully charted his financial household in recent months. The businessman Donald Trump turned out to have at least $ 1.1 billion in debt with his companies.

Over the next four years, he will have to pay off hundreds of millions of those, including a $ 162 million loan for a San Francisco skyscraper to a group of unknown creditors next year. In 2022, a $ 100 million bond on a New York skyscraper expires, and another year later Deutsche Bank wants back $ 125 million that they once lent him for its Miami golf resort.

The pandemic has hit Trump’s golf clubs, hotels and offices hard. And then the turnover that he was able to allocate to his companies as president over the past four years is also gone. Moreover, once the president has left, the enormous hurdle that banks and former business partners had to take to take tough action against him will disappear. Chasing a sitting president against you is something few companies want to do. In addition, there are still criminal investigations into possible messing around with taxes, hidden in his real estate deals.

Trump’s business empire consists of real estate spread around the world, primarily hotels, offices and golf resorts. He largely built this up in the United States with the help of Deutsche Bank. How that relationship came about is described in detail in the recently published book Dark Towers from New York Timesjournalist David Enrich.

The bank and Trump first found each other in 1998. Deutsche Bank was eager to grow in America during that period and was therefore not too choosy in choosing customers. Trump had just disappointed a few other banks by not paying off loans and could use a new financier. Deutsche Bank then lent him money to build a skyscraper in New York, which he called the Trump World Tower.

In 2005, Trump borrowed $ 630 million from Deutsche Bank and $ 130 million from a hedge fund to build a Chicago skyscraper. He promised his backers that it would be a tremendous success, and to show how important the project was to him, he put forward his daughter Ivanka as the one who would run the business.

This project is illustrative of how Trump operated as a businessman and how he is likely to behave again from January. Fishing millions in by promising mountains of gold – the best skyscraper ever – and then breaking agreements and beating around hard in the hope that the problems will disappear that way.

In 2008, the loan for the Chicago tower expired and Trump still had to transfer more than $ 334 million to Deutsche Bank. The building was unfinished, the apartments had not yet been sold and the financial crisis had just started. Trump chose the attack.

He wrote to Deutsche Bank accusing the firm of complicity in causing the financial crisis. A few days later, he also immediately started a lawsuit against the bank, accusing it of ‘predatory’ practices. He demanded 3 billion in damages.

Deutsche Bank had little interest in endless legal proceedings and reached a settlement with Trump in 2010, it found The New York Times this year. The bank and the investment fund forgave him around $ 270 million. What remains is an amount of ‘only’ 45 million dollars that Trump will have to repay to Deutsche Bank in 2024 for this project. For him it is to be hoped that the rental market will have picked up considerably by that time, because according to American real estate magazines, a large part of the property in Chicago has never been rented out to date.

The aggressive bluff with which Trump managed to cancel Deutsche Bank may, incidentally, still pose a criminal problem. The public prosecutor in New York is investigating, among other things, his tax returns. Under the rules, Trump should have reported the amount of debt forgiven him as income. And he should have paid taxes on that. The question is whether Trump ever did that.