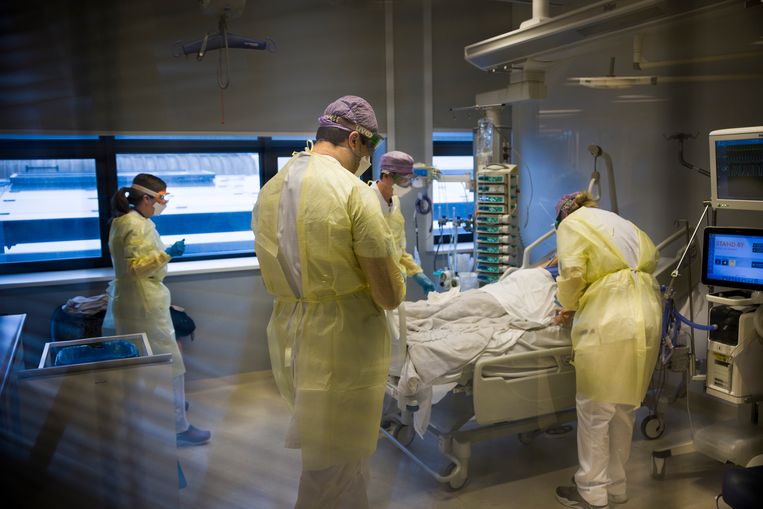 This concerns phase 2d of the upscaling plan that the LNAZ drew up last autumn on behalf of the ministry. An alarm phase further is phase 3, the crisis phase, better known as ‘code black’. The weekly report that the National Coordination Center for Patient Distribution (LCPS) sent to hospitals on Wednesday states that ‘phase 2d is a fact’. The hospitals agreed on Wednesday that the minister should ratify this.

A spokesperson for the minister says that he will examine the request – once it has been officially received – ‘carefully’.

In practice, this means that IC capacity must be scaled up as much as possible, that as much regular, planable care as possible must be canceled and that the deployment of the army is desirable. The continuity of national care is then seriously endangered, also because radical treatments such as cancer operations or interventions on the heart can no longer be carried out on time. The Dutch Healthcare Authority reported on Tuesday that there are already 14 hospitals that cannot provide this ‘acute plannable care’ within six weeks. The risk of permanent health damage or – in the worst case – death is then real.

The weekly report also shows that if IC occupancy continues at the same pace over the next two weeks, there will be 727 Covid patients in IC on December 6. If the IC influx increases by 5 percent, which is not inconceivable, given the rapid increase in the number of infections last week, this will even reach 900 patients on 6 December. There are currently 505 covid patients in ICU and 439 with another condition.

The spokesman for LNAZ says that for the time being ‘we are on our way to phase 2d’. Officially, this will only come into effect when the minister has announced it. According to the spokesperson, there is not immediately a question of the full phase 2d: ‘It goes in steps.’ For example, a scaling up of IC capacity to 1,350 IC beds is not yet on the agenda.

That is the maximum number of beds that can be realized in the Netherlands according to the upscaling plans. But doctors and hospitals have serious doubts about whether that number is really feasible.

IC foreman Diederik Gommers thinks that 1,350 beds are an illusion due to staff loss. Armand Girbes, head of IC at Amsterdam UMC, previously mentioned 1,350 IC beds in de Volkskrant ‘pure good talk’. ‘You only arrive at this number if you want to push through that coûte que coûte and are far from the work floor. I can guarantee that, if we go to those numbers, the care is far from the IC quality we are used to. The consequences in the medium term will be significant.’

The hospitals still have to supply 1,150 IC beds together, but that is also difficult. From the weekly report: ‘The agreed national capacity of 1,150 IC beds has not been realised.’ In the north, the east and the Amsterdam region in particular, hospitals are unable to keep to their agreements.

Therefore, hospital administrators view the coming weeks with great apprehension. Gommers said on Tuesday that he feared code black within ten days. In that scenario, there are no longer enough ICU beds to provide each patient with the life-saving care he or she needs. Doctors then have to choose who is eligible for an IC bed and who is not.

Special triage teams are already meeting in hospitals to train for this and the scenarios are already ready. Special schedules and activities do not only apply to doctors and nurses. Security must also be increased, and there is professional guidance to support the caregivers mentally.

On Friday there will be a national exercise in which all chairmen of the Regional Consultative Bodies Acute Care (Roaz’s), representatives of the Ministry, the NZa, the Inspectorate, and other care organizations participate.

Still, LNAZ chairman Ernst Kuipers told Monday that code black was ‘absolutely out of the question’. According to Minister De Jonge, that is far from the case. ‘We are very far from that,’ said De Jonge at the time. During the corona pandemic, it came to phase 2d once before. Shortly after the last turn of the year, at the height of the third wave, the then Minister of Medical Care Tamara van Ark announced this phase.

Incidentally, phase 3 is also divided into three steps. In phase 3A and 3B, patients are still eligible for an IC bed on the basis of medical priorities (such as the chance of survival and expected length of stay in the IC), whereby someone who needs an IC bed for a short period of time takes precedence over someone who needs an IC bed for a long time (like most covid patients) will need an IC bed. Only in phase 3C do non-medical arguments such as age count for the choice. The ministry considers only that last phase to be ‘code black’.