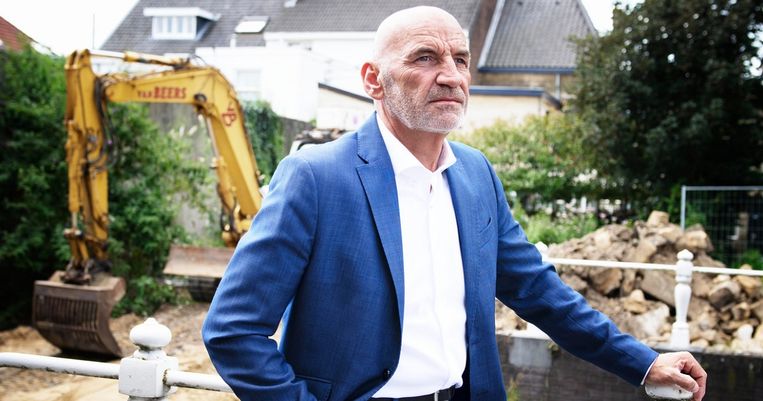 ‘I had no ambition at all to become mayor’, says Daan Prevoo (57) in his office at the town hall of Valkenburg aan de Geul. A few blocks away in the downtown area, waste processors with large grabs are still lifting refrigerators, washing machines and other destroyed household effects onto trucks. ‘I thought a mayor position like this isn’t active enough for me. Haha, now I know better.’

It has been more than two weeks since the tourist town in the idyllic Limburg hills was completely flooded by a combination of extreme rainfall and swirling Geul water. ‘A highway of water thundered through the city centre’, is how Prevoo describes the unprecedented natural disaster that, according to the first estimates, caused more than 400 million euros in damage.

For days he literally stood with his feet in the mud, not only to lead the relief troops, but also to assist crying residents and entrepreneurs. Prevoo, a former SP deputy in Limburg who is now without a party after a fundamental conflict with the party leadership (about refugee and climate policy), is appreciated from many sides for his unbridled commitment, visibility and empathy. Dressed in jeans and a hoodie, he led the king and queen around the disaster area – some onlookers thought he was one of the security guards.

“You are overwhelmed by the events,” he says thoughtfully. ‘But at the same time you have to act very quickly to tackle the most pressing problems. You are going to ask and send all kinds of questions. As a wartime commander, you lead your men on the battlefield. It is rapid chess on several chessboards at once. You have to constantly make decisions: shall we do this or shall we do that? You have to spar very quickly with various specialists and always make decisions. And with every decision you know you can only make it once.’

As mayor, you have experienced more in a short time than your colleagues in ten or twenty years.

‘I was installed as mayor on April 6, in the middle of corona time. On Wednesday 14 July, when the Geul overflowed its banks in the city, I was mayor for a hundred days. The day before I was about to write a review about those first hundred days when the duty officer called me from Schin op Geul, a village further: ‘Mayor, we have a flood here, houses have been flooded. , I’ll report that.’

“I thought for three minutes, got in the car and drove there. The water had literally flowed right through a hotel. It came from a higher water basin that had been flooded. A day later the water came from the other side, through the Geul.

‘That night I only slept for two hours. We had been alert for days, heavy rain had been forecast for days. Wednesday morning we had the crisis service ready. There was not only heavy rainfall in the Limburg hills that lingered for a long time, but also in the Ardennes and the Eifel. All that water was coming our way. I was already on the alarm stand in Schin op Geul, a day later the water wave entered the Geul valley like a tsunami. Many residents had put their valuables and furniture higher up. But one meter turned out not to be high enough. You expect the water level to rise by 20 or 30 centimetres, but it was no less than two metres. Then you go into the highest level of crisis management.’

You even had to decide that Wednesday evening to vacate a hospice. How painful is that?

‘That is extremely painful. There were eight people in the hospice. You know that those people live on the meager time that is still allowed to them. It is time for the next of kin to say goodbye. An evacuation is a huge violation of that last phase of life. But it was necessary. The hospice was located on the Geul in a flooded area. It was absolutely unsafe. Evacuating the most vulnerable is the first thing to do.

‘Unfortunately, one woman died during the evacuation. That is very annoying. I got a call about this at night, that does something to you. It is not a victim of the disaster, certainly not. She was already dying. But it is sad that the relatives were not able to say goodbye in a calmer way. It’s fate, you don’t make up something like that. It could be the inspiration for a poem or a story about the person who died during the flood disaster.’

Elsewhere, too, the damage was enormous and the misery sometimes heartbreaking. What have you not come across?

“I have been out in the area every day talking to affected residents and entrepreneurs, holding them down, supporting them. I found the couple in their early 90s, who were to move to a sheltered home near a care home on the day of the disaster, was very poignant to me. Everything was already in boxes ready in the garage. That move did not go through, all things were lost and the sheltered home with new carpet was also flooded. That you still have to experience that at that age.

‘In the same street was a 78-year-old pigeon fancier who saw all his sixty racing pigeons, his life’s work, lost. He had opened the cage, but they didn’t fly away. I don’t know the psyche of the pigeon, but they probably felt safer in the loft than outside. That man saw how the entire loft with pigeons was dragged into the water. All that was left when the water receded was a pile of cups he’d won over the years. When I was with him, he broke, and so did his wife and son.

‘At such moments you really feel like a mayor. Then age doesn’t matter. I’ve comforted men and women in their 90s. Then it’s like comforting your own children.’

Not everyone wanted to leave their home.

‘I have had to issue several emergency orders to remove mainly older people from their homes. They responded with: we have been through the war, we are not leaving our house. I looked them up again later, with a box of chocolates. And I said, I’m sorry, but I had to. An old woman replied, ‘Next time you’ll have to put a bullet in my head, because I’m really not going anymore.’

During such a crisis, is there still time to relax or reflect on all the events?

‘Not really. At one point I thought I had been working for 36 hours straight, but that turned out to be 72 hours. You lose the sense of time. Time fades. I have sometimes tried to lie in bed for an hour, but you cannot sleep. You are constantly working on solutions in your head. Such a disaster unleashes unprecedented powers in you. You end up in an extraordinarily active mode, the hard disk is constantly spinning. You realize that so many people – residents and entrepreneurs – depend on your decisions. That gives a huge sense of duty.

‘Valkenburg was the hotspot of the flood disaster. It was only after two weeks that I slept six hours straight at night for the first time. What is now also beginning to dawn on us is the fragility of existence. Valkenburg earns its living from tourism. We felt more or less safe in the hills. So this is the effect of climate change. We should be glad that there were no casualties – in the sense of injuries or deaths – among us. But we do have to get to work, together with colleagues in Germany and Belgium, to do something about this vulnerability to high water.’

You noted that the disaster has brought out the good sides in people.

‘The solidarity among residents and entrepreneurs was enormous. That togetherness and self-reliance were fantastic. No one was alone, everyone started helping each other. Hospitality establishments that were not affected spontaneously started handing out meals to colleagues who were affected. People who used to vacation here used to come this way to lend a hand.

‘Hundreds of homes are temporarily uninhabitable due to moisture or structural defects. That could take until the end of this year. We have called on people to make temporary housing available for victims – we then try to make a match. There were even people from Friesland, the Achterhoek and Utrecht who offered accommodation. But people go to work or school here, so that didn’t match. I really experienced what it means when the whole of the Netherlands sympathizes. That’s heartwarming.’

‘I always say: when the sewers overflow, the rats come up. That started with the disaster tourists. We have therefore issued and communicated an emergency ordinance: don’t come here to watch monkeys and see the misery of others. That has worked, because the number of disaster tourists has ultimately remained limited.

‘But other rats on two legs also appeared. A false fund-raising campaign for victims of the flood was held – which the police quickly put a stop to. People supposedly held collections door-to-door as Red Cross employees. Doubtful handymen set out who said they wanted to help for free, but in the end asked for the top prize. Or people who offered loans at high interest.’

Do you think you have handled the crisis well?

‘Others have to assess that – that evaluation will follow. Last week I suddenly had to think of Jan Mans, the mayor who was faced with the fireworks disaster in Enschede. I would have loved to have spoken to him – but unfortunately that is not possible, because he passed away in February.

‘Because in such a crisis as mayor you are sometimes quite lonely. That is the loneliness that every mayor probably experiences in disaster situations. Jan Mans is forever linked to the fireworks disaster. I now realize that my name will probably forever be linked to the flood disaster in Valkenburg.’

Why did you actually become mayor, when you did not aspire to the office?

‘After my departure as commissioner and the break with the SP, I have been active for several years as a consultant and project manager. But I was looking for a new challenge to make a splash for society. Because I still share most SP ideals. I want to make society better.

‘At the end of last year I received a text message from someone: ‘Have you already mailed the application letter for Valkenburg, Daan? We could use someone like you here.’ I never thought of that. Then I started reading the profile and old memories came to mind. As a working student I started in a hotel-restaurant in Valkenburg, as a dishwashing assistant. I could already see the headline in my mind: from dishwasher to mayor.

‘My ancestor is Daniël Prevoo, who was gatekeeper in Valkenburg in 1585. That was one of the few official positions, besides tax collector, schoolmaster and garbage collector. He is my ancestor and namesake. Then I thought: that can’t be a coincidence, I’ll do it.’

‘I actually wanted to go on holiday in mid-July, just after my hundredth working day as mayor. But of course nothing comes of that now. I want to be there for the people, show solidarity with the victims. They can count on my support and closeness. I don’t feel comfortable leaving in this situation. I can’t get that over my head. I might make some time to see my kids and girlfriend more often. But my position will remain for the time being: can be called up immediately.’