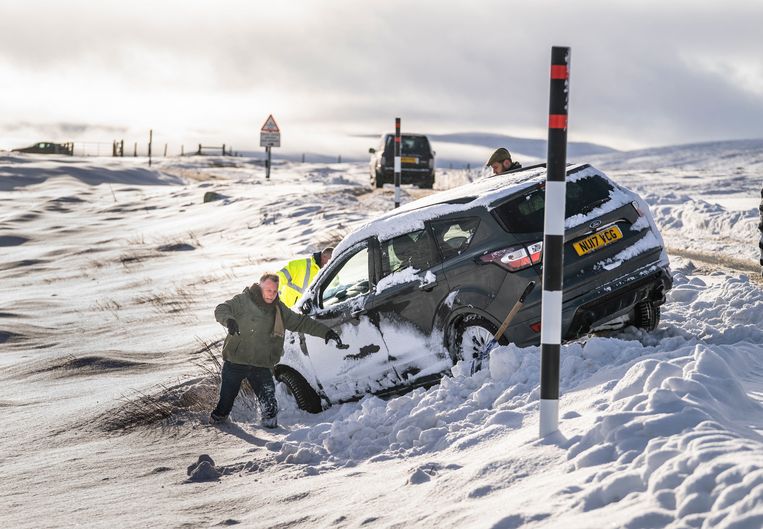 Arwen raced Friday and Saturday at a speed of 160 kilometers per hour over Scotland, Northern Ireland and the north of England, covering the country under a pack of snow. Three people died from falling trees. Railroads and highways became impassable. Football matches could not take place. Corona vaccines thawed, a million households were left without power, and in some cases without water.

The northern English counties of Cumbria and Northumberland took the hardest blows. Wooden electricity poles broke down there like matchsticks. The Northern Powergrid, the energy company owned by Warren Buffett’s investment company, didn’t know what hit it. It soon became apparent that the company had failed to improve the network several years ago, even though it had sufficient funds. Those affected will receive compensation of up to 700 pounds, more than 800 euros.

As is customary in times of need, people in rural communities have come to the rescue, offering warm places to sleep and equally hot meals. The BBC reported on a woman in Cumbria, the also hard-pressed county in the north-west, who started burning furniture in the clay cooker she was cooking outside on. On Wednesday afternoon, 21 thousand homes were still without power. That could take days, residents were told.

Relatively little attention has been paid in the English press to the worst electricity crisis since 2005. The floods in the expensive areas of London in recent days have appealed more to the imagination.

“It is clear that most attention is being paid to omikron and the effect of the virus on Christmas,” writes journalist James Kirkup from this region in the weekly magazine. The Spectator‘and I know it’s a small region, far away, of which we know little. But the fact that the situation in Northumberland is almost unknown to people outside the Northeast I find remarkable, and telling.’ What happened to the regional reporting, was his question.

There is also criticism of the government. Boris Johnson had tweeted to express his concerns and at the corona press conference on Tuesday claimed to have sympathy for compatriots who are trying to make the best of dire circumstances. Economic Affairs Minister Kwasi Kwarteng said he was monitoring the situation on a daily basis and claimed it would be unacceptable “for people to enter the Christmas season without electricity.”

Northerner Kirkup notes that after this episode, Northerners are even more skeptical of the Johnson administration’s promise to level the country, closing the gap between the rich south and the impoverished north. A few weeks ago, Johnson was accused of betraying the north when it was announced that there would be no much-needed – and promised – railway between the northern cities. It remains to be done with the improvement of the existing lines.