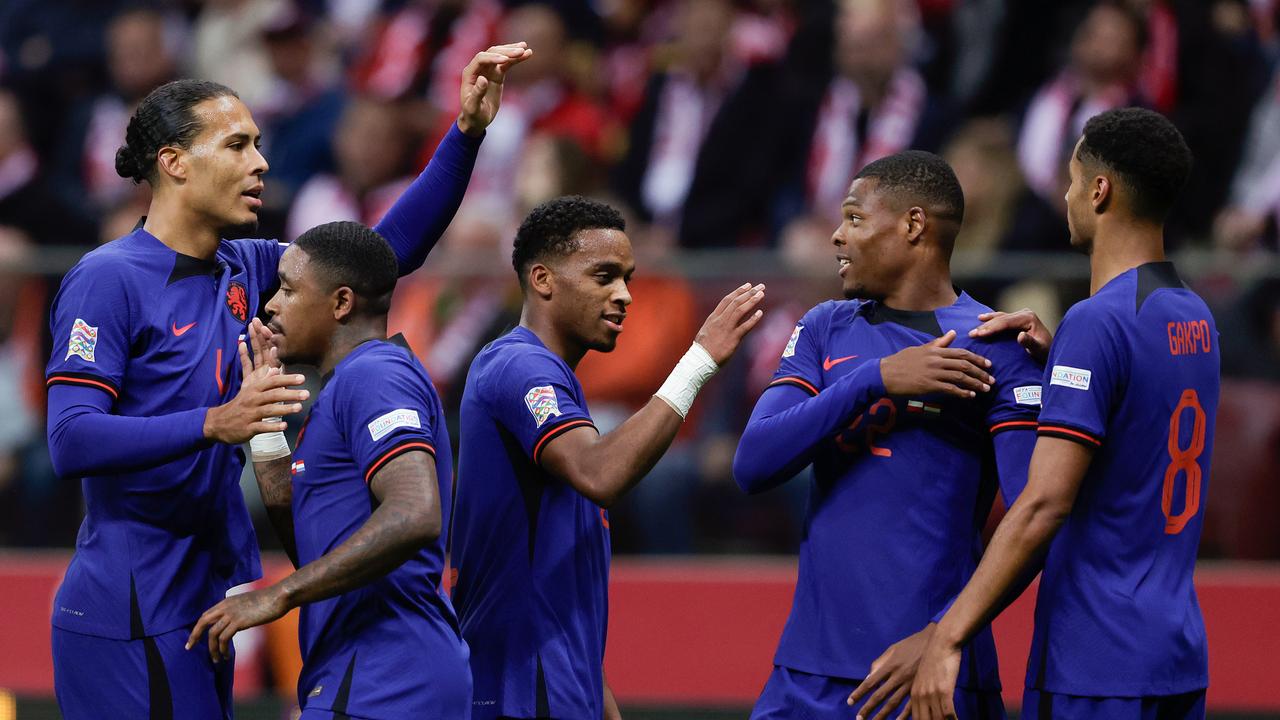 The Dutch national team has almost qualified for the final round of the Nations League on Thursday with a victory over Poland. Thanks to goals from Cody Gakpo and Steven Bergwijn, the team of national coach Louis van Gaal won 0-2 in Warsaw.

Gakpo was the end station of a nice attack in the twelfth minute, after which the Orange had little to fear from Poland in the first half. In the second half, the home team pushed for a while, but it was the Netherlands that scored and decided the game. Bergwijn finished in a controlled manner in the sixtieth minute after a one-two with substitute Vincent Janssen.

Just before that, Janssen had replaced the injured Memphis Depay and it was also worrying that Teun Koopmeiners was injured. On the other hand, Remko Pasveer and Kenneth Taylor made their debuts.

The other Nations League match in group 4 was won by Belgium. The Belgians won 2-1 against Wales in Brussels. Kevin De Bruyne and Michy Batshuayi made it 2-0 at halftime and Kieffer Moore scored for the away team in the second half.

On Sunday, the Orange squad will start the final group match against the Red Devils with three points ahead of number two Belgium. Because the mutual result is the deciding factor, the Netherlands is group winner even in a 3-0 defeat (Orange won 1-4 in Brussels in June), and thus is certain of a place in the final round of the Nations League. It will be completed in June.

Cody Gakpo gave the Orange the lead early in the first half.

Pasveer is the second-oldest debutant

Van Gaal surprisingly chose Pasveer on target on Thursday evening against Poland. The 38-year-old Ajax keeper thus became the second-oldest debutant in Orange ever, after 39-year-old Sander Boschker in 2010. Gakpo and Koopmeiners were also allowed to start, but for the Atalanta midfielder the match was over within a minute. . He was hit hard in the head during a duel with Pole Karol Linetty.

With Berghuis as a replacement for Koopmeiners, the Orange squad had a strong opening phase. In the tenth minute, Berghuis almost enabled Daley Blind to score with a spinning cross, after which it was hit two minutes later. The ball went from Berghuis to Denzel Dumfries and he went one-two with Memphis. The FC Barcelona attacker gave low and Gakpo tapped in (0-1).

The Orange thus had an early lead and did not run into any problems in the remainder of the first half. Van Gaal’s team was given plenty of room to combine. In the 31st minute, Berghuis tried it with a shot that flew past. On the other hand, the powerless Poles failed to bring forward Robert Lewandowski into position. Pasveer only had to come into action in the 37th minute. He held onto Nicola Zalewski’s shot.

Teun Koopmeiners was carried off the field on a stretcher in Poland.

Hoping to force more, the Polish national coach Czeslaw Michniewicz brought in former Ajax player Arek Milik as an extra attacker halfway through, while Frenkie de Jong was replaced by Marten de Roon at the Orange squad. Six minutes after the break, Memphis also had to leave. He was injured and Janssen was added to the squad.

Suddenly there were concerns for Orange. The Poles put more energy into the game, resulting in a huge opportunity for Milik. The Juventus attacker fired from close range. A few minutes later, there was a wild shot from Feyenoord’s Sebastian Szymanski.

The public in Warsaw regained faith in it, until the Orange scored almost out of the blue in the sixtieth minute. Bergwijn started the one-two punch with Janssen and controlled the ball past the Polish goalkeeper Wojciech Szczesny (2-0).

Thanks to the 2-0 lead, the Orange was able to play the game quietly. Van Gaal let Taylor make his debut as a substitute and Wout Weghorst also got playing time, while the Poles no longer believed in it. It was a beautiful evening in the Nations League for the Orange, which also gained confidence for the World Cup in Qatar.

Steven Bergwijn gave the Orange a 0-2 lead after the break.