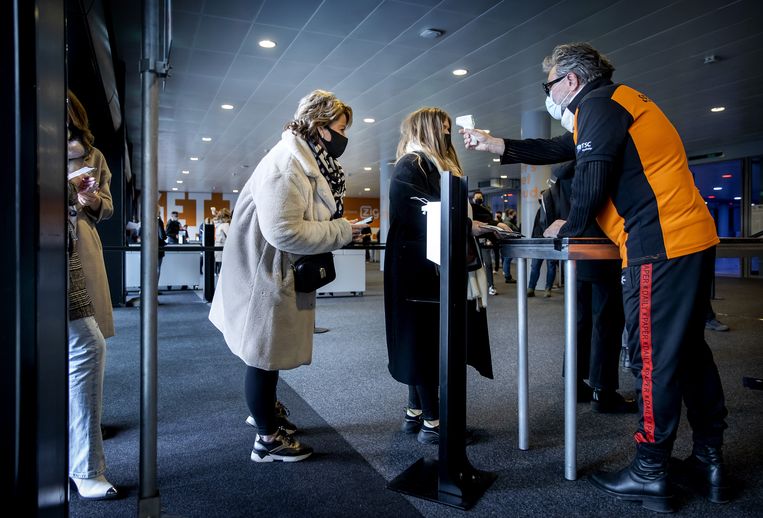 This means that it seems impossible that museums and sports competitions may again allow an audience with negative test results from 11 May, as planned in the government’s reopening plan. Football matches will also be played without an audience this weekend, to the disappointment of the KNVB and the clubs.

The handling of the bill that should make access tests legally possible was postponed for the second time on Wednesday. Initially, outgoing Minister Hugo de Jonge hoped to deal with the temporary Test Certificates Act in the Lower House last week. This had to make access tests possible from 1 May, up to 400 thousand items per day.

Almost all political groups still have too many questions and reservations about the bill, according to their written responses. They find it unclear exactly when and in which situations an access test is considered necessary. There is also dissatisfaction with the personal contribution of 7.50 euros that will be charged for an access test from 1 July.

Last week, De Jonge tried to take away the latter concern in the Tweede Kamer. According to the outgoing minister, access tests would probably only be needed from that moment on to visit major events and festivals such as Lowlands. Visitors are already paying a lot of money for that.

But that did not reassure the House of Representatives and various political groups asked additional questions. The law may now be discussed next week. But even that is not yet certain, says a spokesman for the Ministry of Health.

After the House of Representatives, the Senate still has to consider the bill. That may not happen until May 18. Moreover, the coalition parties in the Senate do not have a majority and the criticism from the left-wing opposition parties and also JA21 is strong.

What is certain is that the pilot phase with access testing will end on Friday after more than four hundred events in April. As a result, there is now a gap, while the period for which access tests may be bridging is becoming shorter and shorter. By way of illustration: according to the Opening Plan, museums would already be allowed to admit visitors without a mandatory entrance test on 26 May.

‘We are now puzzling over the details of the coming period,’ says a spokesperson for the Ministry of Health, Welfare and Sport. ‘It is no coincidence that with the bill we strive for a solid legal basis for test certificates. At the same time, we see the call from society to make more possible, partly with the help of testing. ‘

In any case, the cabinet announced on Thursday that matches in professional football will be played without an audience this weekend, because there is still no legal basis for necessary access tests. The fact that this will certainly be delayed until mid-May is a great disappointment for the clubs and the KNVB. “Then the competition is about over,” said a spokesman for the football association.

The public is welcome at the Eurovision Song Contest, on 18, 20 and 22 May in Rotterdam Ahoy, the cabinet confirmed after an earlier intention. Because this takes place under the banner of a scientific Fieldlab event, it may be possible without amendment of the law. A maximum of 3,500 people are admitted per show.

The idea of ​​reopening society with the help of tests was an explicit wish of a motley coalition in the House of Representatives, from the VVD to GroenLinks. In the meantime, however, criticism has dominated, including on the project’s estimated costs (a maximum of 1.1 billion for the next five months). Museums and amusement parks have also indicated that they see little in the way.