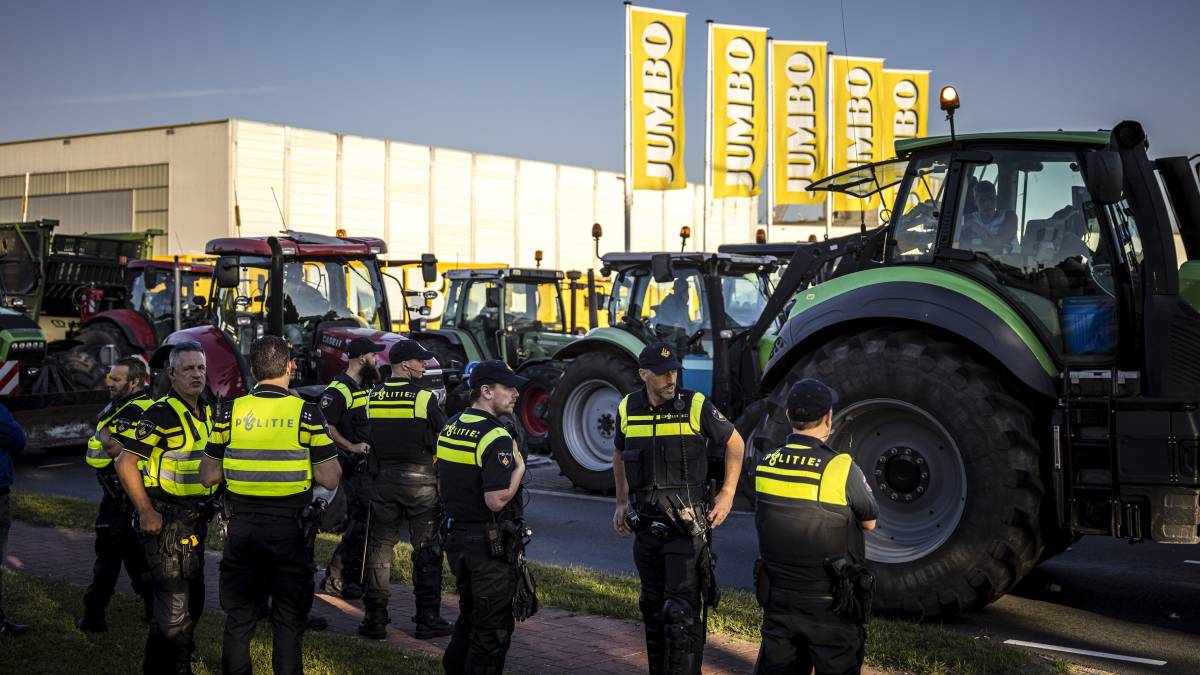 The umbrella organization of supermarkets calls it “completely unacceptable” if the blockades last even longer today. “We have called on the judiciary and the police to clean them up,” says Marc Jansen, director at the Central Bureau for Food Trade (CBL).

The CBL is also thinking about next steps against the protesting farmers. “We must be able to hold them accountable for this misconduct,” says Jansen. “This can no longer go on, because we are not a party to the conflict between government and farmers.”

The CBL says it has not yet received many signals of shortages in the supermarkets. But if the blockages continue, they can arise fairly quickly with fresh products, such as bread, vegetables and fruit and milk. “Some distribution centers also supply hospitals, care centers and other vital services,” says Jansen. “They are also being duped.”

These distribution centers were blocked today:

Earlier, the farmers also blocked a distribution center of Jumbo in Veghel and Albert Heijn in Zaandam. The passage is now free again.

Lidl confirms that half of the distribution centers are currently locked, those at Heerenveen, Oosterhout and Almere. Boni has one distribution center in Nijkerk, which is also blocked. “In the long run, this means that customers will go wrong in our supermarkets,” says a spokesperson. “That will mainly be products that normally run the fastest.”

Earlier we made this explainer video about nitrogen:

What is nitrogen and why is it a problem?

No centers have been blocked at the distribution centers of supermarket chains Dirk, Dekamarkt and Hoogvliet, although the farmers did show their faces. “They came to us in Bleiswijk honking their horns,” says a spokesperson for Hoogvliet. “They stopped for a while and got a filled cake and coffee from us.”

The farmers in Bleiswijk have now moved to the other side, to a so-called ‘e-fulfilment center’ of Jumbo. From there, online ordered groceries are delivered to customers.

What are the consequences of the blockades for the distribution centers?

According to business economist Walther Ploos van Amstel, the consequences of the blockades are limited after one day. The companies are already being hit hard, he says. “It already costs companies a lot of money, for example because products have to be thrown away.” According to him, the retailers are well prepared for various situations, such as blockages. “There are permanent scenarios ready for these kinds of ‘disasters’. That also applies to busy days before the holidays.”

Laurens Sloot, professor of Retail Management at the University of Groningen, estimates that fresh products are used up within two to three days. According to him, some supermarkets receive several deliveries per day. “If they have not been able to deliver, it could already happen today that several shelves are empty. The farmers’ protests were announced in advance. Supermarkets also knew that this could lead to blockages.”

A lucky break, according to Jan Fransoo, professor of Operations and Logistics Management at Tilburg University, is that the blockade actions take place on a Monday. “Normally, that is the quietest day in the supermarkets. It is possible that some consumers panic and start doing all kinds of extra purchases. I don’t think that is necessary, assuming that the distribution centers will function normally again tomorrow.”