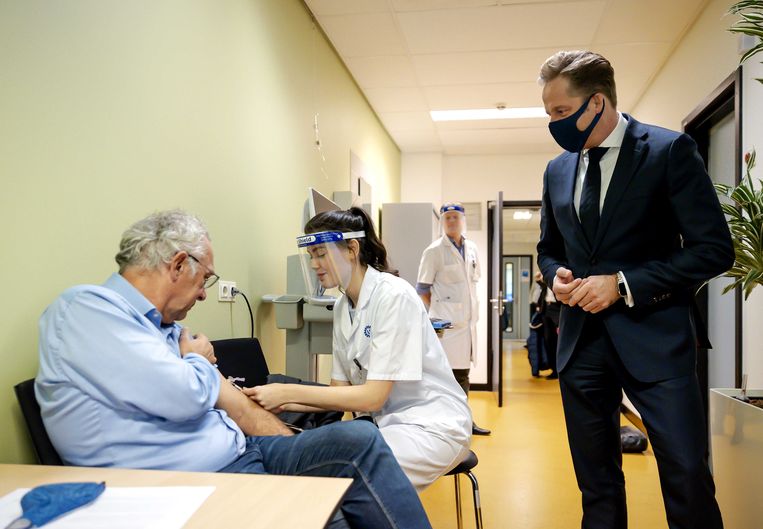 This week it will be pressing again for the interruption microphones in the House of Representatives, where Minister De Jonge of Health, Welfare and Sport defends his budget for 2022. Enough worries in the House of Representatives – about the delayed ‘corona care’, about increasing waiting lists, about the elderly who cannot go to nursing homes. But there is one issue that probably nobody wants to burn their fingers on: the impending unaffordability of care. No, then rather make a good impression with extra wishes.

The figures are known to all groups. Every adult already pays 6,161 euros a year in care, an average household almost a quarter of the income. Even if no care is ‘consumed’, no doctor is visited. Together, the Dutch will pay 87 billion euros next year to general practitioners, hospitals, home care, youth care and nursing homes. If nothing changes, that will rise to 97 billion euros over the next four years. And the health institute RIVM has already drawn the line until 2060: by then the bill will rise, with quite a few tricks, to almost 300 billion euros – in today’s euros. That will then take up 19.6 percent of the gross domestic product, compared to 12.7 percent in 2015. An adult Dutch person then spends an average of 15,800 euros on care. With unchanged policy.

The cost increase is mainly due to the aging population – especially in the last years of life the need for care rises sharply – and to the automatism in the health care laws that the state of the art is by definition followed: what is possible, will happen. If new, better care for cancer patients becomes possible, it will come.

At first sight, the discussion of the budget for Public Health, this week in the House of Representatives, is an excellent opportunity to file 87 billion euros in health care expenditure. But that will never happen, because 85 billion euros is already fixed. Although these are included in the VWS budget, they are premiums that go to health care funds and are then distributed to care providers and health insurers. And there are agreed government grants in the budget for those greenhouses. The part on which the House can directly influence is only 2 billion, and that too is largely fixed – think of long-term subsidies for education and abortion clinics, for example.

The debate about the VWS budget is therefore a hallucinatory experience year after year. It is about additional expenditure instead of dampening health care expenditure. Extra hands on the bed. Higher salaries. More care in the basic package. The dentist also for adults in health insurance. All desires that drive up costs rather than dampen them.

Searching for the brake

Yet the cost explosion is not a law of nature. As Minister of Health (2010-2017), Edith Schippers managed to limit the cost increase. In those years health care expenditure ‘only’ rose by 10 billion euros to 69 billion. In fact, the share of health care in the economy, the gross domestic product, fell slightly. She did this mainly by concluding agreements with, for example, hospitals about working more efficiently. The comprehensive care law AWBZ was dismantled. For 24-hour care in nursing homes, for example, there is now the Long-term Care Act. All care for people in need of help living at home was entrusted to the municipalities. This involved a significant cutback.

Under the current minister, Hugo de Jonge, the handbrake is off again. In four years, health care expenditure increased by 18 billion euros. When he took office, De Jonge knew little about the complex healthcare system and wanted to ensure that Schippers’ reorganisations land well with a series of ‘action plans’. In 2020 he would come up with a fully-fledged vision on healthcare. Even before that, the minister was engulfed by one of the biggest health care crises in living memory. Since then it has been about a lot, but no longer about the costs of care.

As a result, the ball is now in the government’s court. It determines the level to which health care expenditure may increase over the next four years. If no interventions are agreed, that will be 97 billion euros. These are the expenditures estimated by the Central Planning Bureau in 2025 if policy remains unchanged. If measures are agreed in the formation, then it becomes ‘less more’.

What are the chances of this happening? When calculating the election programmes, the Central Planning Bureau concluded at the beginning of this year that VVD, D66, CDA and CU are proposing measures, but that the results do not yield any savings. The CDA even wants to spend 1.4 billion euros extra.

On the other hand: then it was about election programs to placate the voter. Everything can change in the pressure cooker of a formation. As in previous formations, the negotiators will be confronted with the facts by the CPB and the Ministry of Finance: if health care expenditure continues to rise so rapidly, there will be less money for, for example, climate measures, nitrogen policy, housing, defence, police or education. .

But do the forming parties dare to do so? VVD and PvdA were not exactly rewarded in 2017 for their austerity drive. Never before have two ruling parties lost so many seats together. By nature, parties tend to defend the interests of their voters. After all, there are always new elections.

For the time being, there is therefore no faction that sticks its neck out with a rigorous plan. For example, the eyes are mainly focused on De Jonge, the minister who saw his ministerial position largely lost to the pandemic, but who has already hinted here and there that he still wants to continue, also to account for the corona policy of VWS. .

And to try again to curb costs. It seems his hands are itching. After four years he knows the health care system. The corona crisis has exposed a series of weaknesses. The system is too decentralized, every hospital for itself. There is a need for more national guidance and regional collaboration between care providers. If the label ‘less market forces’ is attached to this, there is quickly broad support in politics and society, where the impression prevails that ‘care has become a market’.

De Jonge has already prepared a high-profile bill that went into the desk drawer due to corona. It is about limiting the reimbursement of district nursing that does not have a contract with an insurer. Those ‘uncontracted’ people are now picking up the slack, the ‘easy’ clients who do not require too complicated care, and are claiming too much. Brilliant, because it is a variant at the end of the ‘free doctor’s choice’ that Rutte II originally had in store. Three rebellious Labor Party senators torpedoed it and nearly caused a cabinet crisis.

Atmosphere in the room

De Jonge also runs that risk with every budget cut he will make. On Monday he will be a guest at the formation table, where he can explain the possibilities to VVD, CDA, D66 and ChristenUnie. In view of the atmosphere in the House of Representatives, everything will be aimed at presenting it not as cutbacks, but as an increase in quality. In the corridors, for example, the idea has been circulating for some time to announce that only one home care organization may be active per ‘neighbourhood’, which works closely with other care providers – a variant of the former cross associations. ‘Collaboration’ is a concept that usually generates enthusiasm in parliament.