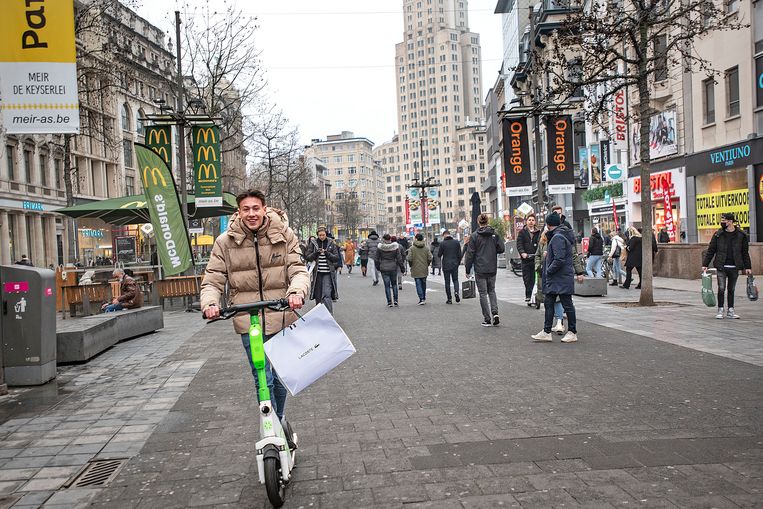 In Antwerp, the cash register rings non-stop by the Dutch who come to shop and have a drink. They whine about mouth caps, but after two tough years they are more than welcome.

How busy was it? Tom Michels shakes his head briefly and moans softly: ‘Wow.’ In recent weeks, when Antwerp was stormed en masse by the Dutch, there was constantly a meter long queue in front of his cash register. ‘I’ve been working in retail for years, but I’ve never experienced anything like it.’

It’s tempting: while the shops in the Netherlands are allowed to open until 5 o’clock in the afternoon and the catering industry is not given an inch of space for the time being, you can just do some shopping in Belgium, go out for dinner and drink a beer afterwards. For most Dutch people it is only a short journey to Antwerp, Bruges, or Ghent – ​​cities they like to visit anyway – and despite the appeal of both Prime Minister Mark Rutte and Cathy Berx, the governor of Antwerp, to stay away , the trains to Antwerp are packed and cars with yellow number plates are driving all over the city.

This week it is quieter than during the Christmas holidays, but on the Meir, the large shopping street with things like Zara, H&M and Primark, you still hear a lot of Dutch with a northern accent. ‘We left Hengelo this morning at 8 am’, says 17-year-old student Finn de Jong cheerfully. ‘Precisely thanks to all those news reports about ‘too busy, too full in Antwerp’, we realized that it is open here. And there is absolutely nothing to do at our house, so we thought: let’s just go!’

They are most welcome, says Michels, affiliate of 4Geeks. The slender man (32) with straight hair looks radiant in the huge store where he sells merchandise of everything that passes on a screen: Batman bathrobes, a Star Wars popcorn machine and – the biggest hit according to Michels – Funko POPS: small dolls with big heads that represent Jimi Hendrix, Harry Potter or one of the five thousand other heroes. “This invasion of the Dutch has made up for everything for us that was destroyed by corona last year.”

The numbers are impressive. During the year-end period, Michels normally generates a turnover of 3,000 euros per day, and in recent weeks he has collected 10,000 to 12,000 euros daily. The same sound can be heard at other shopkeepers in the center of Antwerp: the Dutch made the cash register ring non-stop. ‘They are good customers’, smiles Patrick Beunckens of shoe store Ken. ‘While a Fleming can hesitate for a long time and eventually buy one pair of shoes, a Dutchman decides quickly and takes three or four pairs home.’

What all traders also agree on is that not all Dutch people adhere to the rules. ‘They just push in when we have already reached the maximum number of customers that are allowed to enter our store’, says Daisy Lebegge of Neuhaus, the inventor of the Belgian praline, in a soft voice. “And they aren’t that faithful in wearing a mouth mask either.” What is especially annoying is that if you say something about it, some Dutch people will start a discussion with you. That they can’t breathe well with such a thing, that they aren’t ‘sheep’, or that they don’t believe it works to stop the spread of the virus. While a shopkeeper will be fined 750 euros for every person who is in his business without a mouth cap. The customer has to pay 250 euros – all of which must be settled immediately.

The extra turnover is necessary after two difficult years, says Chiel Sterckx of the Union for Independent Entrepreneurs (Unizo). ‘Belgium has been hit hard. Many cases have closed their doors and the survivors are still licking their wounds.’ According to Unizo’s figures, in the first week of the new year, 10 percent more turnover was generated than normal, partly thanks to the Dutch. That is an average for the whole of Flanders: in the cities and along the border, the Dutchman brought in extra money, but the rest did not benefit from this.

At the start of the pandemic, stricter measures were taken in Belgium than in the Netherlands, and shops there were closed for a total of four months. The catering industry has been hit harder: it had to close its doors for seven months. During that period, the staff went into Temporary Unemployment, which means that they received benefits (70 percent of their salary) and the employer had no wage costs. Under certain conditions, he received an allowance of several thousand euros. If employers could demonstrate a loss of turnover of 40 percent, part of this was compensated by the government.

It is better organized here than in the Netherlands, say Rogier Jongeneelen (34) and his girlfriend Irene Smans (36). They should know, because they have two stores in Breda and a restaurant at the Groenplaats in the center of Antwerp, Het Groene Hart. The terrace is now full. There is food, trays with shots pass by and people sing along with scared heart by Rob de Nijs.

‘The past few weeks have been amazing,’ says Jongeneelen. ‘We were packed from 9.30 am to 11 pm and people sometimes queued for 45 minutes for a table.’ But what was especially nice, says Smans, is the atmosphere of delighted people, who were having a party with complete strangers at the table next to them. ‘You notice that everyone is through it and is relieved when they can act normal again here. That is not only nice for turnover, but above all for our mood. You want to do business, and all that enthusiasm around you gives you energy again after such a difficult time.’