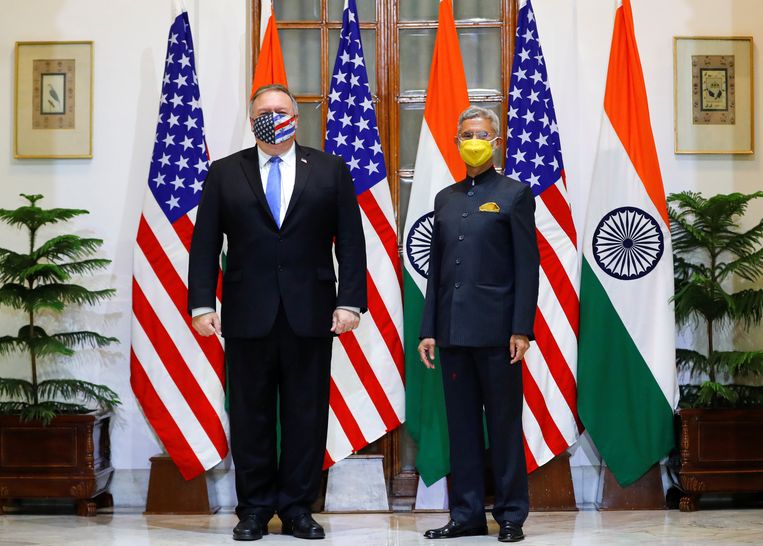 Why does Pompeo travel to Asia so shortly before November 3?

The Trump administration is hoping for another foreign success on the eve of the presidential election on November 3. After the deals to restore relations between the United Arab Emirates, Bahrain and Sudan with Israel, it is now a question of forming a kind of ‘cordon sanitaire’ around China, the emerging world power with which the US is fighting a tough economic and geopolitical battle. .

Pompeo is officially coming to India, Sri Lanka, the Maldives and Indonesia to seek support for a ‘free and open Indo-Pacific’, but that he will mainly spread an anti-Chinese message, he is as clear about that as Trump in his election speeches. The point, Pompeo recently said, “is how free nations can work together to face the threat from the Chinese Communist Party.” China is ‘the elephant in the room’.

For India, given the current border conflict with China in the Himalayas, where tens of thousands of soldiers from both countries have been facing each other for months, it is a good time to strengthen ties with the US (India has already ordered USD 21 billion from weapons in the US). Both countries will sign an agreement that will give India access to US satellite data for missiles and drones, where India is still well behind China. India and the US also want to exchange more information about Chinese activities in the Himalayas and the Indian Ocean, where there is friction over illegal Chinese fishing.

Ultimately, the US sees a crucial role for India in a future regional alliance against China. The core of these are Australia, India, Japan and the US, also known as the ‘Quad’, four countries that together strive for that ‘free and open Indo-Pacific’, which can eventually be expanded with the Southeast Asian countries. of ASEAN. India is playing an increasingly prominent role in the Quad. Next month it will host Malabar, the largest naval exercise in years, to which Australia has also been invited for the first time.

And what does Pompeo want to achieve in Sri Lanka, the Maldives and Indonesia?

In Sri Lanka and the Maldives, it will mainly be about the billions that China invests in ports and other vital infrastructure for the Belt and Road Initiative, the New Silk Road. Investments that saddle Sri Lanka and the Maldives with enormous Chinese debt. Pompeo will therefore advise both countries to remain economically independent. Sri Lanka is already trying to do this by strengthening ties with India and Japan.

Of greater concern for Washington is the South China Sea, which China claims almost entirely and is building full of maritime bases, to the concern of neighboring countries such as Vietnam, Philippines, Taiwan and Indonesia. This summer, the US asked Indonesia for landing rights for its P-8 spy planes, monitoring the Chinese advance in the region. President Joko Widodo ignored the request – Indonesia has a long tradition of neutrality. Pompeo will no doubt raise the issue again this week.

How receptive are the Asian countries to American pressure?

India could put US aid to good use in its risky border dispute with China. Ties have improved greatly in recent years, especially in the defense field. And in front of the cameras, Modi and Trump are the best of friends, although Trump’s blunt remarks about the “ dirty air ” in India in the last TV debate with Joe Biden will not have fallen well. At the same time India very carefully. There is nothing to gain from being sucked into the US-Chinese conflict and further antagonizing its powerful neighbor.

Sri Lanka and Indonesia will also be cautious about the US geopolitical advances, as demonstrated by the Indonesian refusal of the P-8 landing rights. China is a lot closer than the US, and besides, it doesn’t complain about human rights, as Pompeo will probably do (pro forma or not) on every visit this week. In addition, the next American president may also be called Joe Biden.

And how is China responding to the US offensive in Asia?

China has been criticizing Trumpian Asia politics for years. A government spokesman said on Friday that the US is pressuring countries like a ‘bully’ to take sides, but will not succeed. When Pompeo recently called on Australia, Japan and India to build a dam against China, Beijing ordered Washington to abandon its “Cold War mentality” and “ideological prejudices” and stop its “unprovoked attacks” against China.