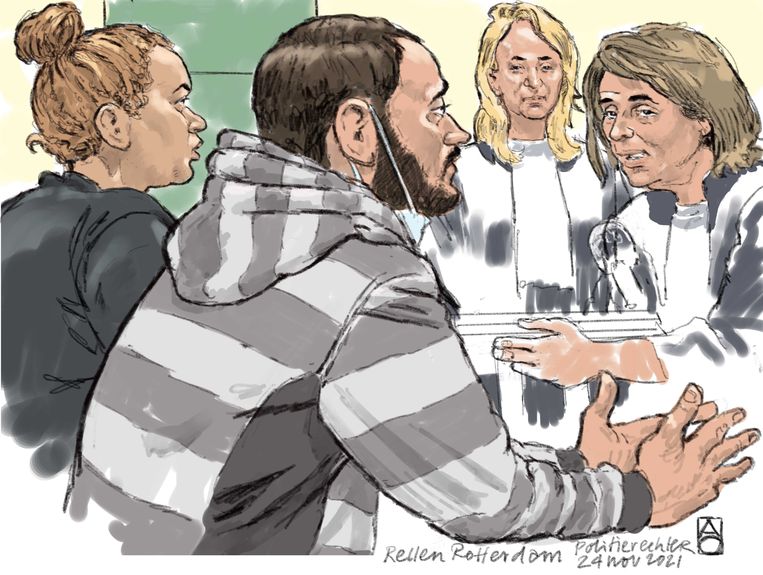 On Wednesday, two rioters, the first of the 49 arrested in Rotterdam, offered a glimpse into their world of thoughts. A 26-year-old woman from Spijkenisse and a 29-year-old man from Delft had to answer for each other for throwing stones at the police and the riot police during a super-urgent hearing in the Rotterdam court. Both were sentenced to five months in prison, two of which were suspended. In addition, the woman and the man, who do not know each other, are not allowed to enter the center of Rotterdam for a year. The woman also has to pay a thousand euros for damage to a police van.

Sharon M. and Terence van den B. did not reveal their souls immediately after their arrest. During their police interrogations, they even denied that they had been involved in the violence. Only in court did they admit the charges against them, also because camera images provided indisputable evidence of this. It shows how M. on the Lijnbaan and the Coolsingel throws stones and paving stones at riot police and police cars with officers in them. Van den B. was filmed breaking a paving stone in the street and throwing the debris at a police bus.

When asked by the judge about the why of their actions, both suspects initially pointed the accusing finger at the police, by whom they would have felt threatened. According to M., police vans had run into people in wheelchairs. “But I see a woman in the images who is laughing,” said the judge. ‘Who throws things at the police with the cigarette in her hands. Raises her middle finger repeatedly.’

Later during the hearing, both suspects placed the responsibility for their actions on themselves. ‘I was stupid,’ acknowledged Van den B. ‘I got carried away with the situation and the tension in the city. Maybe I should have just walked away and gone home.”

Sharon M. and Terence van den B. were not in the dock for the first time. M., who trained as a hairdresser and beautician and is now being retrained as a truck driver, was previously convicted of assaulting a public transport employee. Van den B., a welder by profession, was guilty of assaulting his ex-partner, threatening and insulting the police and open violence.

In court it became clear that M. had a very problematic childhood and struggles with a mental illness, which, according to the public prosecutor, makes it ‘difficult to keep up with the crowd’. Van den B., father of a daughter, has been treated repeatedly in the past for an aggression problem.

What was not discussed during the hearing were the conspiracy theories that M. subscribes to. On her Facebook page, she shares countless messages about people who would have died from the corona vaccine, the dangers of 5G cell towers, secret pedophile networks and the Bilderberg conference. Like Van den B., she said she had gone to Rotterdam to ‘make her voice heard’ against the corona policy.

The prosecutor showed little compassion for all the explanations and extenuating circumstances that the defense of the pair provided. “I feared for my life,” she quoted one of the officers present at the riot. ‘In twenty years with the police I have never seen a crowd of people turn against the police with such violence. My son is upset, my girlfriend doesn’t like me going back to work.’

The judge: ‘The violence was so aimed at the police that officers were terrified. They had to draw their weapons out of fear and after these shots you will start throwing stones.’ Five people suffered bullet wounds during the riots, the National Criminal Investigation Department is investigating whether these were police bullets.

Both suspects expressed regret. “I will never demonstrate again,” they said independently. Van den B. burst into sobs several times. The lawyers for the suspects had argued for community service, but the judge did not want to hear about it. ‘This severe punishment,’ she said, ‘is also a signal to the emergency services and the Rotterdam society that we do not accept this.’