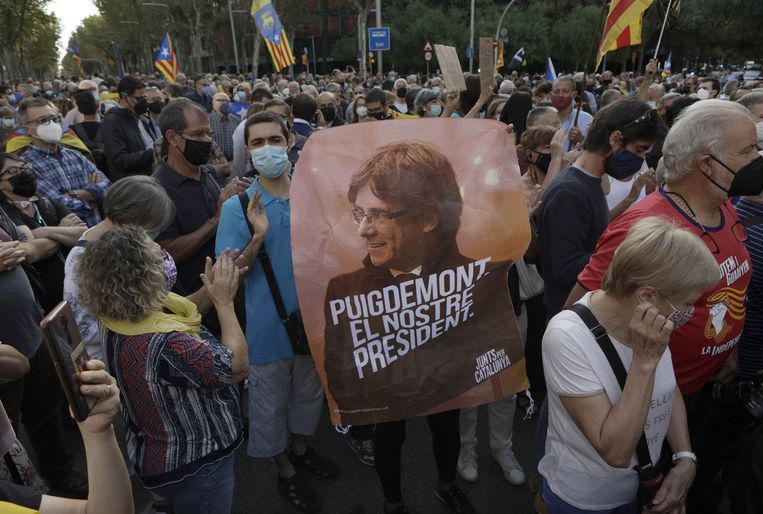 Puigdemont (58) was on his way to an art exhibition in Alghero, Sardinia. Catalonia has a connection with the city: for six centuries the inhabitants (also) have spoken Catalan, a remnant of the time when Spanish kings ruled over parts of Italy. Puigdemont got no further than the airport in ‘L’Alguer’, where the Italian authorities arrested him.

Like no other politician, Carles Puigdemont is a symbol of the Catalan struggle for independence. It was he who, as regional president, proclaimed the free republic of Catalonia in October 2017, after an illegal referendum. Independence lasted eight whole seconds. After Puigdemont proclaimed the republic, he immediately suspended that decision, saying he wanted to “enter into dialogue” with Spain.

He wouldn’t get that chance. The Spanish government of right-wing Prime Minister Rajoy intervened harshly. The Catalan regional government was removed from power and leaders of the movement were sentenced to years in prison. Not Puigdemont: he escaped the dance by fleeing headlong to Belgium. From Waterloo, he has since explored every legal mouse hole to prevent his extradition. He took a big blow when he won a seat in the European Parliament, which gave him immunity. To unprecedented frustration in Spain.

However, in March this year, the European Parliament lifted his immunity. Puigdemont filed a lawsuit against that decision and wanted to continue to enjoy immunity until the ruling, but was rejected by the European Court of Justice. One of the reasons for that rejection was that Puigdemont had nothing to worry about, according to the judges. The Spanish arrest warrant is said to have been temporarily frozen, pending a judge’s decision on the extradition of another separatist who fled to Belgium.

The fact that Puigdemont has now been arrested comes as a blow to him and the other separatists. Were the Italian authorities not aware of the suspension? Has the European Court underestimated the probability of arrest? Or has Spain not been fair to the Court? It is also unclear why Puigdemont was not arrested last week in Paris with a valid arrest warrant, where he spoke with a group of French parliamentarians.

The court in Sardinia is now considering the arrest. On Friday, the judge ruled that Puigdemont may await the decision in freedom. If Puigdemont is extradited to Spain, he faces years of imprisonment. The chances are slim that he will finish it all. Prime Minister Sanchez’s current left-wing government pardoned Catalan separatists earlier this year.

Since then, relations have improved sparingly and the Spanish and Catalan governments have even returned to one negotiating table. That progress is at stake with the arrest of Puigdemont. The current regional president, Pere Aragonès, has demanded on Friday that his predecessor be left alone.